What’s our emergency? According to TVLine’s review of 9-1-1, it’s that Ryan Murphy and Brad Falchuk’s script for their new Fox drama is as meh as the cast is good. Before you take your own turn in the critic’s chair via the poll below, let’s go over the events of Wednesday’s pilot, shall we? 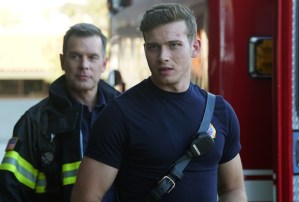 ‘WE’RE LIVING IN A GOLDEN AGE!’ | In short order, the series introduced us to its four major characters and their attendant baggage. Providing the Meredith Grey voiceover was 911 operator Abby (Connie Britton), whose mother (Mariette Hartley) has late-stage Alzheimer’s. Our resident father figure was fire chief Bobby (Peter Krause), a recovering alcoholic who makes confession weekly so as not to forget “how easy it is… to end up on the wrong path.” Since we had a father figure, we also needed a son figure; here, that role was filled by Buck (Into the Badlands’ Oliver Stark), a fireman so randy that the hose jokes all but made themselves. Last but not least, we met Athena (Angela Bassett), a cop whose fractured home life — husband Michael (Rockmond Dunbar) only recently revealed that he’s gay — might explain why nearly every word out of her mouth sounded pissed-off.

As for the episode’s crises-of-the-week, quickly the show dispensed with two: one in which Bobby & Co. resuscitated a boy who’d been rendered unconscious after hitting his head on a diving board and one in which the chief was unable to stop a suicidal young woman from taking a flying leap to her death. (Subsequently, the priest to which Bobby made his confession spelled out for us that the firefighter hit the sauce to dull the pain of not being able to save everyone. Gee, thanks, Father Duh!) After Bobby did some fatherly fussing at Buck for taking out the firetruck, sirens blazing, to hook up with a girl he’d “met” through an app — and even issued “Mr. Hose” the first of three strikes — the team was dispatched to an apartment building in which a tenant was sure that he’d heard a baby crying in the wall. Could a newborn, having been flushed down a toilet, now be stuck in a pipe? 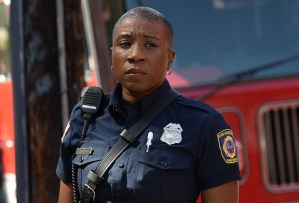 ‘THIS IS LAPD! NO ONE FLUSH YOUR TOILET!’ | Since this would have been the dullest 911 call ever if there hadn’t been a baby stuck in a pipe, yes. Yes, as a matter of fact, there was a preemie in there. While Buck, determined to let us know at every turn just how impetuous he is, moved to put an axe through the wall — and potentially the kid — Athena arrived outside, perma-scowl in place. By and by, the baby was not only extricated from the plumbing but resuscitated, and Athena followed a trail of blood to find the teen mom, who was also in need of medical attention. When she hustled to get the girl onto the ambulance with the newborn, Buck balked. “If this baby dies, it’s on you!” he hollered (and has it ever seemed like a good idea to anyone to holler at Angela Bassett?). At the hospital, the cop tore Buck a new one, explaining loudly that he didn’t get to decide who lived and died, and warning that “the next time you screw up, it’ll be your last!” (Oo… foreshadowing!)

During a pair of home interludes, Athena’s husband defied her wishes and came out to their kids, who took it a lot better than she apparently was (she actually got physical with Michael during an angry outburst), and Abby was saddened to see Mom slipping so badly that she knew neither that she’d ever had applesauce nor that Dad had been gone for a decade. Back at work, Abby got a call from a young woman who was being choked by Britney Spears’ date to the 2001 VMAs — a giant yellow snake. Arriving on the scene, Buck again wanted to go straight for the axe rather than anesthetize the creature as levelheaded colleague Hen (Underground’s Aisha Hinds) suggested. “Nobody told this fool to bring a snake into her house,” she pointed out. Still, Buck went with the “Off with its head!” approach, then proceeded to hit on the girl he’d just saved. Classy. Later, Bobby busted Buck for having again taken the firetruck to a hookup — this time with the snake hoarder — and, to hell with strike two, fired him. B-b-but I love my job, Buck pleased. “I don’t have anything else.” Too bad — he was still, ahem, axed. 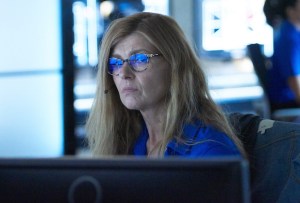 ‘YOU’RE THE REAL HERO HERE’ | In the hour’s climactic case, Abby received a call from a 9-year-old named Lily. She was home alone, and her house was being broken into. But, since her family had just moved in, she didn’t know the address. When cell-tower pinging yielded Abby an approximation of the kid’s location, Athena, grumpily on the case, radioed Hen to ask if she could borrow a firetruck. If they could hear its siren on Lily’s phone, they’d know when they were nearing the house. Since Hen & Co. were already on a case, she sent in their stead — is that legal? Does it matter? — Buck. In no time, he’d helped Athena and Abby zero in on Lily’s house… just as the robbers got ahold of the little girl! Ruh-roh! Hearing that, Abby began yelling over the phone to the robbers, and ultimately offered them a deal: She’d help guide their escape if they just left Lily behind unharmed. Though this was among the oldest tricks in the book…

Yeah, the robbers fell for it hook, line and sinker, and walked right into Athena, pistol drawn. Escaping from the cop, one of the baddies briefly took Lily hostage, then attempted to make a getaway on his motorcycle. He might have made it, too, had it not been for Buck knocking him off the bike with a blast from his powerful firehose. As the pilot drew to a close, Bobby revealed to Buck that Athena had put in a good word for him. In turn, Buck admitted that, while he’d been a punk and OK, fine, still was a punk, now “I’m a punk who understands what he lost.” So he was thrilled to be able to end the day saying, “I think I’m not fired” after all. As for Athena herself, having seen Lily’s mother almost lose her, she softened, at least slightly, toward Michael and asked him to hold dinner so that she could eat with her family that night.

So, what did you think of 9-1-1? Grade it in the poll below, then hit the comments with your reviews.