Ryan Murphy’s TV shows always attract top-notch talent, and his new Fox drama 9-1-1 (debuting Wednesday at 9/8c) is no exception, with Connie Britton, Peter Krause and Angela Bassett all signing on to star. But maybe they should’ve taken a closer look at the script first: 9-1-1 is an uninspiring jumble of recycled TV-procedural clichés, leaving its talented actors out to dry. This is what happens when a grade-A cast collides with grade-D writing — avert your eyes. 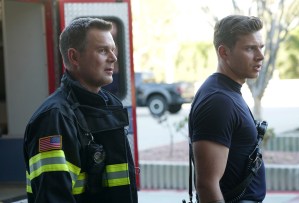 The series centers on a trio of Los Angeles first responders: 911 operator Abby (Britton), firefighter Bobby (Krause) and cop Athena (Bassett), who work in tandem to save lives when emergencies strike. The pilot mostly focuses on the firehouse, establishing Bobby’s father-son dynamic with Buck (Into the Badlands‘ Oliver Stark), a young hotshot who tends to let his libido interfere with his job. (He gets in trouble for taking the fire engine out to hook up with a girl he met on a dating app.) Underground standout Aisha Hinds also co-stars as Hen, another young firefighter, so this cast is unquestionably stacked.

9-1-1 follows a fairly straightforward procedural formula, tracking these first responders as they tend to various life-and-death situations. The emergency calls are appropriately tense, but also hampered by preposterous twists — the first responders face at least three once-in-a-lifetime calls, all within a day or so of each other — and glaring plot holes. (A girl is nearly strangled to death by her python, yet somehow recovers quickly enough to be making out with Buck in the next scene?) I kept waiting for Murphy and his co-creator Brad Falchuk to throw some interesting wrinkles into the formula… but none ever came.

Any inkling of originality here is quickly smothered by hackneyed dialogue about “how lucky we are to do what we do,” and how tough the first responders’ jobs are… but they love them anyway! The pilot script has a high schmaltz quotient, with clunky narration from Abby about life’s “emergencies,” and Bobby and Buck’s alpha-male bickering will sound very familiar to anyone who’s watched a TV show before. (Sample dialogue: “I love this job! I don’t have anything else!”) It’s all so depressingly middle-of-the-road, as if Fox and Murphy were cynically aiming to launch their own Chicago Fire-style franchise to print money with. In fact, they should’ve just titled this Chicago 9-1-1, and hoped viewers wouldn’t notice it doesn’t air on NBC (or take place in Chicago). 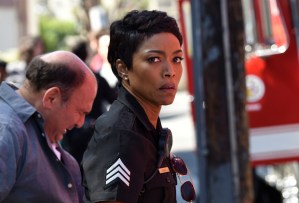 Things don’t improve much when 9-1-1 delves into its characters’ personal lives. The first responders’ backstories are half-heartedly penciled in: Abby has a mom with Alzheimer’s; Bobby is a former alcoholic who goes to Catholic confession every week. Bassett gets the worst of it, saddled with a jarringly out-of-place subplot where Athena’s husband Michael (Prison Break‘s Rockmond Dunbar) has just revealed he’s gay. Both Bassett and Dunbar put admirable effort into making this material feel authentic, but it comes off as hopelessly dated, like someone dusted off a stilted TV movie script from the ’90s.

All that said, 9-1-1 is still almost worth watching just for the sheer star power on display. Britton is especially winning, as Abby helps lead distressed callers to safety using just her voice. (You know how they say some actors would be compelling just reading the phone book? Connie Britton is compelling just listening to a phone call.) But she’s held back by the fact that Abby is stuck sitting alone in a call center, isolated from the rest of the cast. At least the others get to interact with each other in real life… even if those interactions are riddled with worn-out platitudes.

Would it surprise you to learn that the 9-1-1 pilot ends with the most obvious musical cue possible: Bowie and Queen’s “Under Pressure”? Well, it shouldn’t. Murphy has done great, daring work elsewhere, and that’s why actors will follow him anywhere. But 9-1-1 is neither great, nor daring — and these actors deserve far, far better.

THE TVLINE BOTTOM LINE: Despite a terrific cast trying its best, 9-1-1 relies too heavily on ludicrous twists and hackneyed dialogue to earn a second viewing.