Warning: The following contains spoilers from the Part 4 premiere of The Ranch. Jump ahead to our next recap by clicking here.

(Note: On Dec. 5, Danny Masterson was fired by Netflix. Because of The Ranch‘s accelerated production schedule, Masterson appears in all 10 new episodes. His character’s departure will take place during Part 5, to be released in 2018. The series has already been renewed through Part 6.)

Kurtwood Smith turns up as Old Man Peterson in The Ranch Part 4 premiere, reuniting with former That ’70s Show costar Ashton Kutcher. In the episode, Colt learns that Peterson has an inoperable brain tumor and is looking to sell his ranch. Neumann’s Hill is interested, but Colt convinces Peterson that he’d be better off selling to him and his family. Rooster’s initially on board, but suggests they hold off after learning that Maggie would have to return and sell off the bar just to help them scrape the money together. Colt responds irrationally, but it’s obvious that his anger stems from something else entirely. 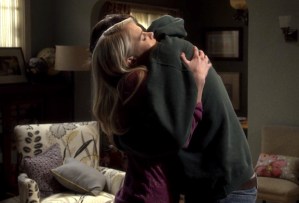 Finally, at the 23-minute mark, the show addresses the major cliffhanger that closed out Part 3. Heather had a miscarriage, and Colt refuses to talk about it, instead opting to drown his sorrows in a bottle of Jim Beam. Abby phones Heather once his drinking gets out of hand, and the would-be parents talk through their heartbreak, as well as their guilt. As sad as it was to lose the baby, both of them feel a sense of relief about not having to bring a child into the world when neither of them is truly ready. In the end, Heather tells Colt that it’s OK to have these feelings, and that it doesn’t make him a bad person.

* Beau and Brenda (recurring guest star Sharon Lawrence) are officially dating — and she’s already got him substituting steak-and-whiskey dinners for the occasional sushi and wine combo. (Don’t go changing him too much, Brenda!)

* The show’s umpteenth reference to a fellow Netflix series comes when Dale reveals himself to be obsessed with Stranger Things‘ Eleven. (“I just love it when that little baldheaded girl starts moving things with her mind!”)

What did you think of The Ranch Part 4 premiere? Grade it via the following poll, then drop a comment below.