Warning: The following recap contains spoilers from the Part 3 finale of The Ranch. If you do not wish to be spoiled, bookmark for safekeeping and return once you’ve finished all 10 episodes. Afterwards, continue on to our Part 4 premiere recap.

Is there enough whiskey in the world to get the Bennett family through the potential heartbreak that awaits them?

Colt, already spreading himself too thin, begins making promises he can’t keep. He and Abby set aside two hours on a Friday afternoon to finally be alone, but plans change after he pays a visit to Heather, who asks that he join her at the OB/GYN to find out the sex of the baby. Having agreed to be there for Heather every step of the way, Colt is forced to bail on Abby, leaving the couple with no choice but to try and squeeze in a quickie during Colt’s shift at Safeway. After “interrupting” an employee’s surprise party, they relocate to the teacher’s lounge at Abby’s school, only to once again get caught, this time by a pervy janitor. (Better luck gettin’ lucky next time!) 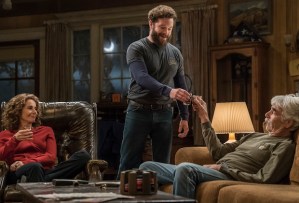 Once Maggie decides to take off with Clint, she calls up Jerry (recurring guest star Martin Mull) to see if there’s  still an offer on the bar. Unfortunately, the prospective buyer is no longer interested, leaving her in quite a bind. That’s when Rooster steps up and agrees to take over the bar, freeing his mother to proceed with her travels. Colt, meanwhile, isn’t doing anything to make her feel good about her decision. He initially leaves in a huff when she comes to tell him the news, and later guilt-trips her about skipping town just as she’s about to become a grandmother.

The Bennetts eventually gather back at the family ranch, where Colt half-heartedly apologizes for hurting Maggie’s feelings. As they toast her forthcoming trip over whiskey, Colt’s phone rings with a frantic Mary on the other line. Heather’s in the hospital, and it’s not clear if the baby is alright. As he rushes out of the house to get to her, the episode fades to black. (As for what happens next? Well, if past breaks between half-seasons of The Ranch are any indication, we’ll find out in 6-8 months.)

What did you think of The Ranch’s latest cliffhanger? Grade the finale, as well as Part 3 via the following polls, then drop your thoughts in a comment below.