And though The Exorcist‘s Marcus Keane regularly deals with the snarling, snapping realities of demonic possession, series star Ben Daniels says that the reappearance of Marcus’ former protégé Mouse will really mess with the stalwart former priest.

“It’s going to be a huge shock,” Daniels says of the characters’ reunion in the Season 2 finale, which airs tonight at 9/8c (Fox). “But also, he’s been thinking about her for a long time this season — primarily because of the situation with Tomas, how close it is in a lot of ways.”

You’ll recall that, when Cindy’s husband had the two men chained up in the barn at the start of this season, Marcus obliquely mentioned Mouse as a cautionary tale meant to scare a headstrong Tomas into being more cautious. 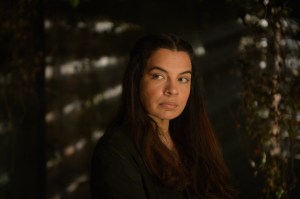 “She’s been on his mind. Suddenly to be there in the flesh is quite alarming to him, I think, because he’s deeply superstitious,” Daniels previews, laughing. “He doesn’t really know why she’s there, so his guard will be up.”

We got Daniels on the phone to tease the supernatural drama’s high-stakes season ender, as well as to go deep on Marcus’ relationships with Mouse and Tomas. Read on for the highlights.

TVLINE | What we’ve seen about Marcus and Mouse’s relationship in the past informs a lot of how he’s reacted to Tomas and his eagerness to get involved in exorcisms. How much do you think it’s been on his mind throughout the season?
I think it’s been hugely on his mind. That’s why he has stuck with Tomas. Because near the beginning, when we were talking about it, I would go, “Why did he stay there?” When I didn’t know the full Mouse story, when it was still being developed in the writers’ room. I could find no reason for [Marcus] to stay with this guy, who’s bringing about death and destruction by inviting this demon in and he’s not listening. But then the more that we worked on what had actually happened with Mouse, the more it tied in that Marcus would actually stay with Tomas and try and teach him and try and guide him, because that’s what he didn’t do with Mouse. He feels deeply responsible for what happened with Mouse. And also, he fell in love with her. And that completely let the demon in and made Marcus unable to perform an exorcism on her because of how he felt, his feelings for her.

TVLINE | One of the things I love about the show is that there’s an intimacy to a lot of the relationships that is not necessarily romantic/sexual, but it may be romatic/sexual.
Absolutely, yeah. Absolutely. 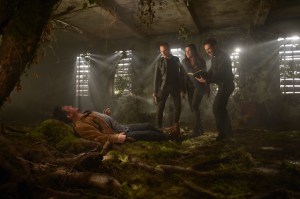 TVLINE | So seeing the somewhat romantic nature of Marcus’ relationship with Mouse was interesting, given that we’d only been given indications that he is a gay man. What conversations have you had about his backstory when it comes to that area of his life?
We’d shot the pilot, and I sat down with Rolin Jones, who was showrunning the first season. He told me of an episode, which I think was going to be Episode 3, where Marcus gets excommunicated, and he goes into a bar — [Laughs] they couldn’t do this because of budgetary constraints, too many extras. Marcus would’ve bought everyone a drink, I don’t know how, because he wouldn’t have had that much money! But that’s how it went in the script. I buy everyone a drink and some guy starts chatting him up and [Marcus is] like, “Yeah, I’m gay. I’m gay.” And immediately I was like, “No.” [Laughs]

So I did one of my Ben Daniels 20-page emails, where I said I just think it would be far more interesting if this character who’d been with the Church since he was 12 had a completely unformed sexuality — and prior to that point, he’d only every been abused in every which way, shape and form when he was in that boys’ home. I said, “I think it would be much more fascinating if that were a real struggle for him. And when we actually get to an episode where he starts to explore his sexuality, if we see him explore that for the first time as someone my age, I thought it would be more fascinating than for him to go, ‘I am gay. I am bi. I am straight or whatever.’ For that to be uncharted territory for him.” So I had always pushed for him to be bi, from the outset. Or, for him to not actually know what he was but a bisexual area was more interesting for me to explore.

The first time we ever see him overtly flirt with someone with the guy in the bar — although I have placed another couple in there somewhere, the younger nun in the first season, and also Cherry Rego. I made a point of saying, “OK, if we’re going to introduce little and explore more in Season 2, I want to be able to have plotted it along the way.” …Then the more we talked about Mouse, I was like, “OK, what if this is what happened and this is how he felt about her, and that made him feel sinful in some way, and the demon kind of pounces on that.” It was talked about from a really early stage, I guess, is an answer to your question. [Laughs]