The good news, in The Exorcist‘s Season 2 finale: After a season of feeling spiritually adrift, Marcus Keane has reconnected with God. Hallelujah!

The bad news: That connection has been reestablished because Tomas, Marcus’ estranged fellow exorcist, is very likely in mortal danger. Annnd, cut to cliffhanger!

The Fox drama wrapped its second season Friday with an episode that provides closure for Andy and his family of foster kids while creating absolute chaos for everyone else. A very brief recap:

* After Tomas and Mouse meet up with Marcus, Keane is shocked to learn his former protégé (and then some) is an exorcist herself now. She fills them in on the Church’s mission to snuff out them and their ilk, but Andy’s possession is a far more pressing concern.

* With Andy tied up in the abandoned cabin, Tomas realizes that he has to offer himself as bait to the demon in order to save the foster dad. “I don’t want to lose you,” Marcus says quietly. “Then bring me back,” Tomas replies. 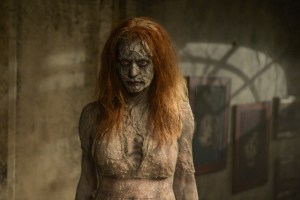 * Tomas enters the demon’s realm and finds Andy fighting valiantly though ineffectively. After Andy gives the priest a message for the kids, Tomas offers himself to the demon, and the evil thing enters him. It goes as far as Tomas developing a second pupil in one of his eyes — which greatly concerns Marcus and Mouse — before Andy comes out of it enough to tell Marcus to shoot him. So he does, which kills Andy but saves Tomas.

* Tomas delivers Andy’s messages of love to a grieving Rose and the shellshocked kids. A few months later, we see Rose take Truck from his facility to a new home. Turns out, it’s hers: She’s chosen to foster all of Andy’s children, who happily reunite with their brother.

* Mouse and Tomas prepare to leave town, but Marcus says he can’t go with them because he’s committed cold-blooded murder — a mortal sin — and feels no regret. Tomas pulls him close and whispers, “Adios, hermano,” then has a mini-breakdown when he realizes that his partner truly isn’t coming back. Mouse offers to be his new partner, and they leave Seattle to rendezvous with Father Bennett…

* … except Bennett is in no shape to see anyone, given that the Church has put some kind of mojo urn under his bed. And the last time we see him, he’s going after a nurse with some very sharp implements.

In separate interviews, we talked with Exorcist executive producer Jeremy Slater and star Ben Daniels about filming the finale’s charged emotional moments, choosing to end on a question mark and working in a fan request for a classic horror homage.

TVLINE | This finale ends on quite the cliffhanger in a very, very different fashion from last season. Why a cliffhanger?
JEREMY SLATER | We knew going in into this season that if we ended it in the same way, where the case is successful and the heroes emerge unscathed, and Marcus and Tomas walk off into the sunset together, arm in arm, it starts to feel like nothing matters. It starts to feel like every season kind of just resets back to the status quo, which I think is a mistake with serialized, long-form storytelling.

You want to shake up the equation a little bit. So we said from the beginning, if Season 1 was Marcus and Tomas meeting, then Season 2 would be them becoming brothers, what would Season 3 be? [What] we felt was creatively right early on was to shake up that dynamic and to essentially separate them for at least part of the third season to really show how much they need each other and to set them on two very different paths. and then to find an exciting way to bring those two paths back together… Without the cliffhanger it turns into a pretty dour ending where you know they’re kind of separated forever and Marcus is out of the game, and Tomas has a new partner.

So the cliffhanger felt important to just add a little ray of hope to the end there. To let the audience know that yes, you know, the famous last hour of television was kind of brutal and it probably didn’t go the way a lot of fans were hoping, but there is a light at the end of the tunnel. This separation may be traumatic, but it may not necessarily be permanent.

TVLINE | In your mind, what does Season 3 look like? [Editor’s note: This conversation took place before Disney bought 21st Century Fox, which produces The Exorcist. In a tweet Thursday, Slater said he “can’t imagine” that the sale “means good things for the future of our show.”]
SLATER | I think it’ll be totally interesting to see what will happen to Tomas being on the road with a brand-new partner, especially knowing how different Mouse is from Marcus in terms of methodology and ruthlessness, and everything else. She’s going to train [Tomas] in very different ways and use him in different ways.

Where Marcus was very much constantly worried — almost to the point of obsession — with protecting Tomas, Mouse doesn’t have those same nurturing instincts. In Mouse’s eyes, Tomas is a weapon to be used in this larger war. He’s an asset that she could potentially control, and so I think that’s a really fun interesting dynamic, and so the question is: How long can you keep those two stories separate if Marcus doesn’t necessarily know where Tomas and Mouse are. 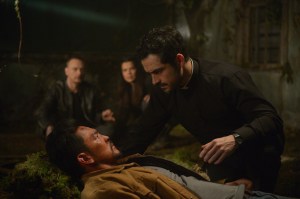 TVLINE | There are a few Marcus/Tomas scenes that are very intense and very intimate: when Tomas offers himself as bait, and then the goodbye. Talk to me about those.
BEN DANIELS | That [first] scene, we did talk about. There are two lines: “I don’t want to lose you” and then something like, “You’d better come and get me.” It’s like an open declaration of love, really, in whatever sense you want to take that. When we played it, it took us both completely by surprise, as did that very last scene in the motel room when he suddenly grabs me for a hug. I adore Alfonso [Herrera], and I adore working with him. It’s just the most fantastic working relationship. And we were both really choked up after shooting that last scene, because we thought this might be the last time that we have a scene together as these characters. And it also played into the scene. Both of us, we went into the room next door as we were shooting it, we were sobbing! [Laughs] Because it’s been a very intense working relationship.
SLATER | They really are tremendous friends, and they have such chemistry together on screen. They bounce of each other so well, but they also just really like each other as human beings. So we intentionally kept some of these big, traumatic goodbye sequences for near the end of the shoot.

Obviously, with our show being in the position it is, there’s a lot of uncertainty hanging over the future. There’s no guarantee for Season 3. And I think both of the actors probably have that hanging over them — that idea that this may be the last time I really kind of get to dig into one of these deep, meaty scenes with my friend… It was tough for us to watch, and it was tough for them to perform. But the end result is, I think they’re some of the most powerful, emotional scenes we’ve ever done on our show. 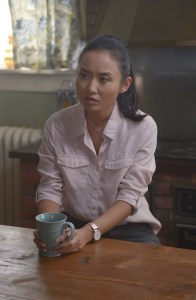 TVLINE | It’s odd to say, but Andy, the kids and Rose have what’s probably the happiest ending in the finale, comparatively. Did you ever think of making their wrap-up even darker?
SLATER | I knew from the first season that our possession case this year was not going to survive the year, because you needed that death. You needed that Empire Strikes Back feeling to be able to separate Marcus and Tomas and to really shake up the audience and let them know this is a show where no one is safe.

So with that in mind, we knew going in, you know, in our first meetings with John Cho… We knew that if we were going to break the audience’s hearts with what’s happening to Andy, you need some glimmer of hope to counterbalance that. I think if you had ended the season with all of the kids just kind of sitting in these [hellish] detention centers, and staring down a life of poverty, drug abuse, neglect and loneliness, a lot of people would have just turned off the TV — myself included… I think everyone in the writing room and everyone on the cast and crew just kind of fell in love with the kids, and just really wanted to give them the happiest ending we could.

TVLINE | Marcus reconnects with God in the final scene. Have you had any conversations about what, exactly is being communicated to him about Tomas?
DANIELS | I know exactly what I’m playing, but I don’t think I can tease it, other than: Tomas is in danger. That’s all I can tease. And God intercepts, like, “You’re forgiven… but this is what’s going to happen.”

…It’s really brave to put it in, because it’s such an ambiguous ending. If there’s no Season 3, that’s what you’re left with! Poor Bennett! [Laughs] I would be so furious if that were the end!

TVLINE | Speaking of which: Bennett! Is he decapitating a nurse at the end of that sequence?
SLATER | He’s about to. That’s our Exorcist III shot. That shot in The Exorcist III is actually pretty famous in the horror community because it’s widely regarded as one of the best jump scares of all time. A possessed person attacks someone in the hospital with gardening shears, and so that was our callback to that scene.

TVLINE | I was completely unfamiliar with it!
SLATER | Yeah. Half the audience is going to be really happy to see it, and the other half is going to be really confused… It’s something that the fans have been asking me for since literally before the first episode ever came out. So we said, “Damn it, if this is our last one ever, we’re going to give them that one shot.”

Grade the finale via the poll below, then hit the comments: What did you think of The Exorcist‘s season — and possibly series — finale?