All I wanted for Christmas was to find out who Riverdale‘s Black Hood killer is… and you know, kids, sometimes wishes do come true. 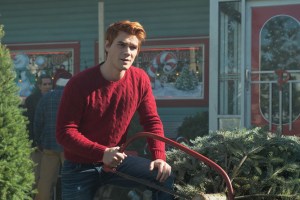 It’s Christmas time in Riverdale, and Kevin is having a Secret Santa party for the gang… which gets awkward fast, since Archie and Jughead are still freshly broken up with Veronica and Betty. (Ronnie gets a gift certificate for a couples’ massage — gee, thanks.) But Betty’s a little distracted, anyway, by bad dreams of the Black Hood wearing a Santa suit and coming at her with a knife. (At least her nightmares are holiday-appropriate.) Archie is still hung up on the Black Hood, too, and they go into Nancy Drew mode together when they notice that the school janitor, Mr. Svenson, is mysteriously absent from school after Archie grilled him about his secret past last week.

The plot thickens when Betty receives a gift from another “secret Santa”: It’s a severed finger (!), along with a fresh note from the Black Hood that labels Svenson a “sinner.” A side trip to the Sisters of Quiet Mercy convent, where Svenson was raised after his family was murdered, reveals his original sin: He may have identified the wrong man as the Riverdale Reaper, and had an innocent man killed by an angry mob as a result. The trail leads, strangely enough, to Cheryl’s cuckoo Nana Rose — ’tis the season for awkward family reunions, right? — who remembers that Betty’s grandfather was actually a part of that angry mob. So is this why the Hood is targeting Betty? It’s all a lot to process, and while Archie tries to comfort Betty, the two old friends end up sharing a kiss. (That sound you hear is “Bughead” fans everywhere sobbing into a glass of eggnog.) 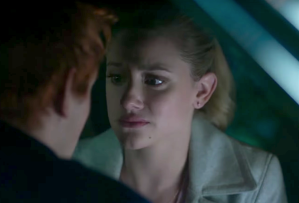 No time for love, though, guys: We’ve got a killer to unmask! Betty finds an old photo of her grandpa standing under a tree that resembles the “Devil’s Hand” Nana Rose mentioned, so they head to that tree’s location and find a makeshift tombstone for Svenson, along with a couple of shovels. They dig up a casket, but it’s empty — and suddenly, the Black Hood is there pointing a gun at them! He tells Archie to get into the casket and orders Betty to bury him alive, but when a cop siren distracts him, she smacks him in the face with her shovel! (Go, Betty!) They chase him down, and Archie points his gun at the Black Hood, and… bang! The Hood goes down in a heap.

Archie didn’t pull the trigger, though; it was Sheriff Keller, who miraculously arrived at just the right time — and, apparently, really isn’t the Black Hood after all? He confirms the guy is dead, and removes his hood… and it’s Mr. Svenson! He’s missing a finger, too; he apparently cut it off himself to throw them off the scent. (Wow, that’s dedication. Did he think Betty was going to have that fingerprint tested?) Back at Pop’s with Ronnie and Jughead, Betty speculates that Svenson was targeting sinners in an attempt to atone for identifying the wrong guy all those years ago. I mean… sure, why not?

But maybe the Black Hood’s reign of terror isn’t over just yet. Because while Archie and Veronica share a holiday smooch on his front porch, someone is snapping photos of them. And Betty tosses all of her Black Hood files into a roaring fire… but decides to hold onto the hood the killer gave her. Betty, stop it, you’re scaring me! 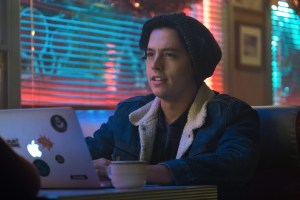 FIVE SNAKES A-SLITHERING | Jughead has his dad home for the holidays, but things are tense between them: F.P. has to handle mystery bags for Penny to settle his debt and tells Jughead to stay out of it. Convinced his dad is running drugs, Jughead gathers a band of Serpents (including Toni and Sweet Pea) to help him “take out” Penny. And that involves Jughead kidnapping her, telling her to stay out of Riverdale and threatening her with a switchblade when she refuses. (Jughead, stop it, you’re scaring me! Maybe he and Betty are a good match?) F.P. is furious when he finds out, but Jughead is proud of himself — and proud to call himself a Serpent. We don’t really think Penny is going to go away quietly, though, do we?

ALL I WANT FOR CHRISTMAS IS 86 GRAND | Veronica, the blissfully unaware one-percenter, hands out ridiculously lavish gifts to her friends, but feels a pang of guilt when Archie tells her about Fred’s staggering $86,000 hospital bill. When she pushes back against her family’s conspicuous wealth at the dinner table, Hermione’s response is perfect: “Since when are you a Communist?” Veronica wants her daddy to pay Archie’s daddy’s bill for him, and when he refuses, Ronnie snoops around in his study and charges the entire bill to her mom’s black card. Oh, and she finds the deed that shows Hiram bought Pop’s, and lied to her about it. With the deed in hand, she demands to know more about the Lodge family finances, and Hiram and Hermione finally let her in on all their shady dealings. They agree to foot Fred’s hospital bill, too — they might need a favor from him someday, after all.

* As happy as I am to have the Black Hood mystery solved, I’m left feeling… underwhelmed? So the killer turned out to be a character we just met two weeks ago? And who has no connection to Betty? (How did he know about the Nancy Drew code she loved as a kid?) And who doesn’t really match the Hood’s physical description? (He’s not big enough, and his eyes aren’t green enough.) It just feels like it came out of left field to me.

* If you have questions about that Black Hood reveal — and I’m sure you do — I spoke to Riverdale showrunner Roberto Aguirre-Sacasa about it. Check out what he has to say right here.

* Very happy to see Nana Rose again, but her comment to Penelope about the Blossom kids — “You should’ve drowned them at birth. Like a basket of kittens.” — scared the bejeezus out of me. She’s one of those old relatives that seems kooky and fun until they say something completely offensive, isn’t she?

* Veronica finally told Archie that she loves him, too… but is that love going to last after she finds out about that smooch with Betty?

* So is Betty going to continue the Black Hood’s quest to expose sinners, but in a less murder-y way? Or does she just think that hood is a cool fashion statement? (It does get awfully chilly in Riverdale, I guess.)

Got thoughts on tonight’s Riverdale fall finale? Grade it in our poll, and then grab a booth in the comments below.