The Black Hood killer has finally been unmasked… but is the mystery really solved?

Riverdale‘s fall finale revealed the man underneath the hood: school janitor Mr. Svenson, who was shot dead by Sheriff Keller after Archie and Betty cornered him. Betty theorized that Svenson was trying to atone for his own past mistakes — he identified the wrong man in his family’s murder, inadvertently getting an innocent person killed — by cleansing Riverdale of all its sinners. But if that’s really the end of the Black Hood story, who was taking photos of Archie and Veronica? And why did Betty keep the hood the killer gave her? 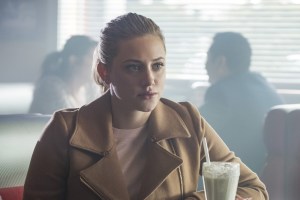 Don’t expect more victims to pop up when Riverdale‘s second season resumes next month. “I think the Black Hood saga, as we’ve been playing it, is over,” executive producer Roberto Aguirre-Sacasa tells TVLine. But that doesn’t mean every loose end has been neatly tied up, either: “There’s still going to be a lot of fallout from the Black Hood, though, to play.” That fallout includes that chilling final shot of Betty deciding not to burn the hood. She “does have a darkness within her,” the EP notes, “and part of the reason the Black Hood fixated on her is because their darkness reflected each other. So yeah, that tease does imply that Betty’s story with the Black Hood isn’t over.”

Mr. Svenson “was definitely one of our suspects” when the Riverdale writers’ room started debating who the Black Hood could possibly be, Aguirre-Sacasa remembers, along with “probably four or five” other contenders. But choosing a character that just debuted on the show a couple of weeks ago did put the writers in a tight time-crunch, he admits: “We were like, ‘We’ll introduce him,’ and then we pushed him to the next episode, and then the next episode, and then it was like, ‘Guys, we’ve gotta introduce him, or it’s not going to work!'”

Aguirre-Sacasa teases that we’ll “have to stay tuned” to find out who was snapping those photos of Archie and Veronica — and why Archie didn’t think Mr. Svenson’s eyes matched the Black Hood’s. But he does hint that “there’s still some disentangling, and some skeletons to come out of the closet” regarding Svenson’s back story and his connection to the Riverdale Reaper: “Just when you think you’ve hit the bottom of the crazy, you realize there’s a whole other level of crazy.” 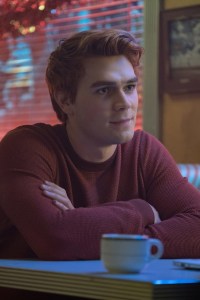 The Black Hood reveal wasn’t the finale’s only gasp-worthy moment, though. Archie and Betty also shared a kiss (!) while on the killer’s trail, even though the all-American redhead ended back in Veronica’s arms by episode’s end. The Archie/Betty/Veronica “love triangle is the essence of the Archie comics, and it’s sort of always bubbling underneath,” Aguirre-Sacasa says, adding that “it’s something that we are going to play a little more aggressively in the second half of the season, but hopefully in a way that is unexpected and a twist.”

The resurrection of that classic love triangle is just one of the plotlines we can expect to see when Riverdale returns from its winter break on Jan. 17. The Black Hood storyline dominated Season 2’s first half and “made it more challenging to tell relationship and character stories,” the EP concedes, “so I’m excited in the second half to get back to that, and the romances, and stories that are more centered at the school.” Still, there will be a new mystery for the gang to investigate later this season, he confirms… “but I don’t want to spoil it.”

Grade the Riverdale fall finale in our poll below, then hit the comments with your thoughts on the big Black Hood reveal.