Betty and Jughead took a break from the Great Black Hood Hunt this week on Riverdale, so they could both get in touch with their inner Serpent. 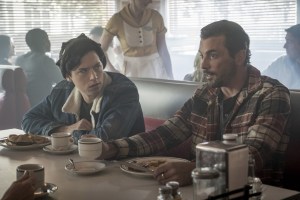 Jughead’s dad F.P. is getting out of jail — something about overcrowding; don’t overthink it — and Jughead is there to greet him when he gets out, along with Betty and her mom Alice, who immediately asks F.P. if he’s “incredibly sexually frustrated.” (Welcome home, I guess.) F.P. says he’s done with Serpent life: He’s given up booze, and wants to get a legitimate job working at Pop’s. He even drinks his coffee with his pinkie extended! And he wants the same for Jughead, too: On a father-son motorcycle ride, when he learns about Jughead’s deal with Penny, he urges him to get the hell out of Riverdale instead and go to college. But Dad! I just got this cool leather jacket! 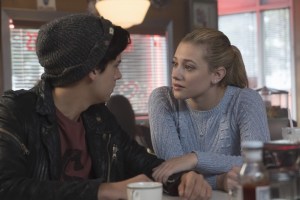 Betty decides to throw F.P. a “retirement party” at the Whyte Wyrm to celebrate his post-Serpent life, and she even bonds with Toni a little while party-planning. She confesses she’s worried about Jughead, and wants to — if not become a full-fledged Serpent — at least stay “Serpent-adjacent” to keep an eye on him. If she wants to do that, though, she’ll have to perform something known as “the Serpent Dance.” (Which just looks like old-fashioned stripping to me, but I’m no expert.) Oh, and Penny lets Jughead know that his debt to her isn’t exactly paid off — and she won’t hesitate to take it out on Betty if he doesn’t comply.

Alice and F.P. have a definite vibe going this week, by the way: He invites her to the party, telling her to leave Hal at home (!), and she shows up in full Serpent gear, sucking back a shot of tequila. (Yeah, Alice!) But her buzz gets ruined when Betty takes to the stage and strips down to lingerie for a provocative “Serpent Dance,” rubbing her hands all over herself and grinding on a pole. F.P. interrupts to take the microphone and inform his fellow Serpents that he’s not retiring after all. The authorities told him to keep his distance from the Serpents, he says, but “it’ll be a cold day in hell before a pig tells a snake what to do.”

Jughead can’t believe it, but later, F.P. tells him he worked out a deal with Penny: He’ll pay off his debt to her so Jughead doesn’t have to. A wounded Jughead lashes out at Betty, saying he doesn’t want her anywhere near the Serpents. Wait, are they breaking up — again? “How many times are we going to push each other away?” she asks him. “Until it sticks,” he replies. Oof. He rides off alone. Let’s pour out some tequila for the demise of “Bughead”… for real, this time. 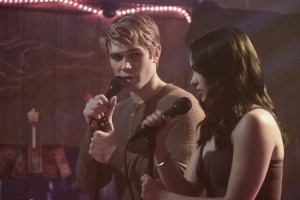 THE CLEAN-UP CREW | While Betty and Jughead are busy dealing with all that, they decide to hand off the Black Hood investigation to Archie and Veronica. (Ronnie’s response is priceless: “You want us… to be you guys?”) And they start out with a meaty clue: Jughead looked into the Riverdale Reaper case and confirmed that a family was murdered — in the same old house the Black Hood led Betty to. Archie and Ronnie have their own personal issues to sort through, though. After a steamy tryst in front of a roaring fire, he told her “I love you”… and she did not reciprocate. (Finally, Archie Andrews and George Costanza have something in common.)

They track down the daughter of the sheriff who worked on the original murder case, and she refers to that old house as “the Devil’s House.” They go to the house — at night, of course — and we see flashbacks of the Reaper killing all four family members with a shotgun. Or were there five? Veronica finds another set of initials carved on a doorframe, and a family photo confirms: They had another kid who somehow survived the attack. Digging through old yearbooks, Archie and Ronnie identify the kid: Joseph Svenson, aka the school janitor! We knew he was all shifty for a reason!

They confront Mr. Svenson, who admits he escaped the murders by hiding in the woods, adding that the murderer later was killed himself in a fit of “mob justice.” Veronica is convinced that he’s the Black Hood, but Archie says it’s not him: He’s looked into the Black Hood’s piercing green eyes, and they don’t match Svenson’s. So that’s another name crossed off our Black Hood list.

And maybe another Riverdale romance crossed off, too: Archie finally corners Ronnie about the unrequited “I love you,” and she admits she can’t return his feelings right now. (She’s never really heard her parents say it to each other, for one thing.) Archie acts like he’s fine with that, but he’s not, and the tension between them causes Veronica to run off stage during their White Wyrm musical performance. Archie retreats to his bedroom, where he casts a longing glance towards Betty’s room right next door — and she looks right back at him. Ladies and gentlemen… it might be “Barchie” time.

* Cheryl’s weird crush on Josie continued this week, with her volunteering to massage the knots out of Josie’s back in the school locker room. They were interrupted by that “peeping Tom” Svenson, though.

* On a related note: Cheryl’s cheerleading locker has “HBIC” on it. Of course it does.

* Lots of shirtless Archie this week. Not a complaint; just an observation.

* How did we still hear Betty’s voice singing even while she was dancing on the Whyte Wyrm’s stripper pole, away from the microphone? And wouldn’t a room full of bikers applaud happily when she finished, instead of the stunned silence we heard?

* Lili Reinhart clearly told me in October that any romance between Betty and Archie was “over and done with.” Lili, how could you?!