Betty tracked down a hot lead in the Black Hood case this week in a truly weird and unsettling Riverdale. (And the deeper she dug, the hotter it got.)

Wednesday’s episode was presented in three segments, like an old-school horror anthology, so let’s take ’em one at a time…

YES, FEAR THE REAPER | So the Black Hood has a new demand for the people of Riverdale: He commands them not to sin for the next 48 hours, or he’ll kill again. (It’s kind of like The Purge, but in reverse?) Jughead gets a call from that Serpent attorney, Penny Peabody, who’s calling in a favor: She says the Ghoulies beat up his dad F.P. in the prison shower for that stunt he and Archie pulled at the drag race, and they want payback. Jughead has to pick up a crate — she won’t tell him what’s in it, but it might rhyme with “mingle-mangle” — on the Southside and deliver it to an address in Greendale. He enlists Archie to help him, and they set off in Fred’s truck… and that’s when things get really creepy. 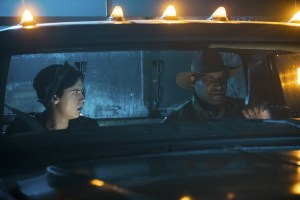 They load up the crate and head towards Greendale, but when their truck blows a tire, an old black guy named Farmer McGinty pulls over to help. (Actually, he demands cash to help, so he’s not exactly a Good Samaritan.) McGinty can only take one passenger, so Jughead volunteers — and he warns Jughead not to look at what’s under the tarp in his truck bed. (Yikes.) On the drive, McGinty listens to talk radio praising the Black Hood, and says the killer is doing “God’s work.” He adds that it reminds him of the Riverdale Reaper. Who’s that now? Riverdale had another serial killer back in the day?

At a roadside diner, Jughead peeks under the tarp and spots some blood… but it’s just a dead deer. (I know, “just.”) But McGinty is still acting strange, telling Jughead the tale of the Riverdale Reaper, who killed a family in their home with a shotgun and then vanished. McGinty orders Jughead to pay, but he has no money, so McGinty declares him and Archie sinners and warns they might be next to get killed. (Nice to meet you, too!) Archie gets his tire fixed, and they deliver the crate to a dimly lit Greendale warehouse, where a beret-wearing lady in a wheelchair now expects Jughead to be her regular “delivery boy.”

In the morning, Jughead visits F.P. in prison — and he’s totally fine! Penny admits she made up the attack, and then shows Jughead some surveillance video of him and Archie carrying the mystery crate. She calls it “insurance,” and plans to use it to make Jughead keep working for her. Oof. Guess F.P. was right when he warned Jughead not to mess with her. 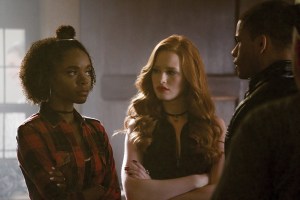 JOSIE, BEHIND YOU! | First of all, hell yeah to Josie getting her own storyline for once! She’s rehearsing music by herself at school late at night — the kindly janitor lets her stay late (hmmm…) — when she hears footsteps. It’s nothing, but her mom Mayor McCoy is still worried; she’s moved them into a hotel while all this Black Hood stuff is going on, and wants Josie home before dark. Cheryl’s set up Josie with time at a recording studio as a thank-you for saving her from Nick… but they just want Josie, sans Pussycats. Oh, and a “secret admirer” is leaving cute/creepy gifts in Josie’s locker.

Chuck Clayton — remember him? Dark Betty sure does — seems like he might be that admirer, asking Josie out and promising he’s changed his ways. (He’s taking art classes now… and going to church!) They even share a dance at Pop’s to a ’50s rockabilly tune, but they’re interrupted by Mayor McCoy, who’s furious that Josie is out late. Then when Josie receives a pencil drawing from her admirer with the caption, “If I can’t have you, no one can” (along with a wrapped pig’s heart), she and Cheryl confront Chuck at school. He denies it, and the janitor still seems mighty sketchy… but later, we see Cheryl drawing Josie. Oooh, twist! So Cheryl’s into Josie? Or is she just framing Chuck? A lot to untangle here. 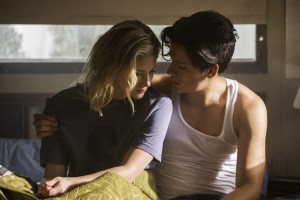 A KELLER BOD | We finish up with Betty, who can’t understand how the Black Hood got into the sheriff’s station to shoot Mr. Phillips. Us, either! She’s now convinced that (dun-dun-dun) Sheriff Keller is the Black Hood. (Someone’s clearly been reading TVLine.) Keller tells her the Black Hood forced his way in while the deputy was asleep, but Betty’s not buying it. Veronica thinks he’s just having an affair, but agrees to have a sleepover at Kevin’s house to dig around for evidence. While she’s snooping, she goes down to the basement, hears Sheriff Keller grunting and finds him… lifting weights shirtless, with a massively jacked bod. Oh hi, Sheriff Keller’s bulging pectorals.

Veronica tries to play it cool, asking him about Kevin’s mom, who’s apparently in the military and stationed in Bahrain. But later, she spots the sheriff driving away in the middle of the night, and Betty notes a Southside drug addict was found dead the next day. Hit by a train, sure… but was he pushed? By someone wearing a hood? She’s suspicious enough to sneak into Kevin’s house and snoop around, finding a murder board of the Black Hood’s victims in the sheriff’s home office… along with a black hood, just as Sheriff Keller catches her. Oh no, is she next?

Nah, he just calls her dad Hal to pick her up. Keller explains the hood is the one he took from Archie’s locker, and shows Betty his log book, which proves he has an alibi for each of the Black Hood’s attacks. She’s not convinced, though, and she and Veronica stake out Kevin’s house and tail Keller as he drives off. They follow him to a seedy motel, where he’s greeted by… Mayor McCoy! Veronica’s intuition was right: They are having an affair! And that is a sin, after all…

Back at Pop’s, Betty and Ronnie agree not to tell Kevin about his dad when the diner phone rings. Pop answers it, and it’s the Black Hood, who declares they failed his little test and they’re all sinners: “The reckoning is upon us,” Pop says gravely.

* So what’s the deal about the Riverdale Reaper? Who did he kill? Could that case be connected to the Black Hood? I have a feeling we’ll be hearing a lot more about this…

* Have we really crossed Sheriff Keller off the Black Hood list? He definitely could have doctored that log book, right? Although I did find it interesting that Hal made an appearance this week…

* Josie’s gender-flipped cover of the Classics IV’s “Spooky” was pretty groovy, right? Pussycats or no Pussycats, she sounds pretty great.

* And that janitor: Was he just a red herring? Or is there more to untangle there, too? He did seem way too involved in Josie’s life.

* Biggest laugh of the week had to be Kevin showing Veronica how to play a very boring board game: “And if you roll a six, you can take over the Kingdom of Theodore!”