Think Riverdale‘s Black Hood killer is regretting picking up the phone to call Betty Cooper yet?

Betty sprints over to Nick St. Clair’s hotel room as this week’s episode opens, wracked with guilt that she gave the Black Hood his name last week. She finds him angry but alive — just as Sheriff Keller arrives to haul him downtown for drugging Cheryl. The Black Hood tells Betty he didn’t kill Nick because he’s not a Riverdale native, but he liked seeing Betty’s true self: “It was beautiful, and righteous: judge, jury and executioner… now the real work can begin.” His next task for her: identify the town’s jingle-jangle supplier known as “the Sugar Man.” Track down an anonymous drug lord who’s eluded the cops for years? Sure, no sweat!

Nick’s not really getting punished, though. Cheryl’s despicable mom Penelope thinks Cheryl must’ve provoked him and refuses to press charges: “Nothing really happened to Cheryl.” Cheryl plasters on a smile and pretends everything’s fine… but she urges Veronica to go after Nick, since he almost pulled the same act on her. Sheriff Keller tells Ronnie their accounts of that night can’t be trusted, since they still had jingle-jangle in their systems. (Damn, that jingle-jangle is a helluva drug.) Mayor McCoy is furious to learn that her daughter Josie indulged in “the JJ” and declares open war on the Southside, with the cops raiding Southside High and slamming cuffs on Jughead’s new pals Toni and Sweet Pea. 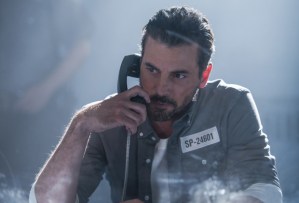 Speaking of Toni the Home-Wrecking Serpent: She and Jughead did enjoy a “PG-13 grope session,” we learn (!), but she doesn’t want to be his rebound chick. (“Besides,” she adds, “I’m more into girls anyway.” Well, OK, then.) Jughead wants to expose what’s going on, but his Southside High teacher Mr. Phillips won’t let him publish anything in the school paper since Jughead’s fallen in with the Serpents. What’s more, he discovers that Serpent henchman Tall Boy has struck a deal with rival gang the Ghoulies without his OK. Jughead visits F.P. in prison for some fatherly advice, who tells him: Challenge the Ghoulies to a street race, with the winner controlling Southside High. How Danny Zuko of you.

Meanwhile, Betty asks Cheryl about the Sugar Man, since her late dad Cliff was running the local drug trade. Cheryl remembers her mom telling her horror stories about the Sugar Man when she was a kid, but she thought Penelope just made him up. She digs up old childhood drawings she did of the Sugar Man and confronts her mom about them, who tells Cheryl not to worry her pretty red head about it. A real-life villain named Nick, though, taunts Cheryl at Pop’s, informing her that his parents bought off Penelope’s silence with a big ol’ check. She sobs to Penelope that she needs her mom’s support — “Care about me more!” — before Penelope finally caves and throws the check into the fire… and gives her the Sugar Man’s name. See, Cheryl can solve mysteries, too, you guys!

Before that, though, we have a race to run. Jughead and Archie rev up their engine next to a pair of Ghoulies, with Cheryl (natch) vamping it up in the role of flag girl. They speed off, with the Ghoulies sideswiping Jughead’s car and pulling ahead. As they approach a narrow bridge, Archie warns that only one car can fit. Jughead thinks he can make it, but at the last second, Archie yanks the parking brake and stops their car, allowing the Ghoulies to zip ahead and win the race. WTF, Archie? As it turns out, he tipped off the cops, who are waiting to arrest the Ghoulies at the other end of the bridge. But that doesn’t negate the bet, right? And now the Ghoulies will want Archie’s “head on a stake,” Jughead points out. (Like a lot of Archie’s plans, this one doesn’t seem particularly well thought out.) 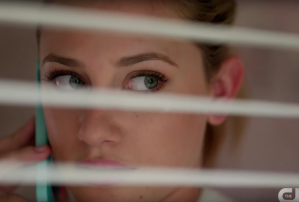 More importantly, Betty gets the Sugar Man’s name from Cheryl — it’s Jughead’s school advisor, Mr. Phillips! No wonder he didn’t want Jughead writing about drugs — and she starts feeling emboldened, telling the Black Hood she already published Mr. Phillips’ name in the school paper and had him arrested, so the Black Hood can’t just kill him. When the killer warns her she’s playing a “risky game,” she snaps back: “But it’s my game now.” And she’s determined to unmask him next: “I’m breathing down your neck. Can you feel it? Can you feel me?” All hail Dark Betty!

In other good news, Nick St. Clair gets his comeuppance after all: After Veronica tells Hiram he tried to force himself on her, too, the St. Clairs end up having an “unfortunate” car “accident” that lands Nick in the hospital. “Karma’s a bitch,” Veronica sniffs. (A good reminder not to make Hiram Lodge angry.) And the Sugar Man can’t avoid the Black Hood’s wrath, either: As Mr. Phillips sits in his jail cell, the Black Hood waltzes in and points his gun between the bars, pulling the trigger.

* Cheer up, “Bughead” fans: Betty and Jughead got back together! But how is she going to react when she finds out about that “PG-13 grope session” he had with Toni? Will he insist, “We were on a break!” Ross Geller-style?

* How in blazes did the Black Hood sneak inside the Riverdale jail in order to shoot Mr. Phillips? Unless Sheriff Keller was in on it somehow…

* What was up with Kevin taking Veronica’s side over Betty’s in the girls’ tiff and snubbing her at school? I thought he was #TeamBetty for life. Et tu, Kevin?

* Anybody else notice Fred popping a few too many pain pills this week? Don’t pull a Kevin-on-This Is Us, Fred!

* Loved Veronica’s utter disgust when a gang member referred to her and Betty as “bitches”: “I beg your misogynistic pardon?”

* Archie sent Betty a text that read: “Hey, you up?” Uh, Archie, I don’t think those words mean what you think they mean.