The Black Hood continued to torment Betty this week on Riverdale… but he’s not the only heinous villain in town.

Betty’s still on the phone with the Black Hood, who says he and Betty both want to cleanse this town of sinners — like her sister Polly. The killer knows where Polly’s staying, and warns that if Betty tells anyone about this call, “I’ll carve her like a jack-o-lantern.” She confides in Archie, though, who snaps into overprotective mode, telling his lifelong bestie: “I’m not letting you go through this alone.” But hey, Betty, how about confiding in your beloved boyfriend Jughead, huh?

Jughead is a little distracted, as it turns out, with the Serpents fuming after their brawl with Archie’s gang and demanding to know where he stands. Wanting to prevent an all-out war, he dons his Serpent jacket — which looks pretty good on him, to be honest — and agrees to go through their “initiation.” At first, the trials are simple: take care of a stinky pooch named Hot Dog; yell out Serpent laws in a rowdy bar. But the Serpents turn up the heat by having him fetch a knife out of a cage holding a live rattlesnake. (Don’t worry: The snake’s venom has been removed.) 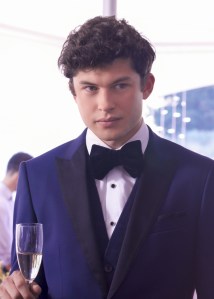 Speaking of snakes: Veronica’s old pal Nick St. Clair comes to Riverdale for a visit, as his ultra-rich parents consider investing in Hiram’s land development. Ronnie calls him “a ghost from my bad-girl past,” and Nick quickly lives up to that billing by offering her and Archie a bump of cocaine. (Gasp! This is a milkshake town, young man!) He’s openly flirty with Veronica, too, which Archie clearly isn’t crazy about. But Nick still invites the gang over to his hotel room for a meet-and-greet rager, hoping to bring some NYC-style hedonism to this sleepy hamlet.

Betty gets another call from the Black Hood, who calls her mom Alice “a thorn in both our sides” and tells Betty to publish what he just emailed her in the school paper. If she does, he’ll answer one question from her. In Betty’s email, she finds an old mugshot of Alice, arrested as a teen. She hesitates, but when Alice insinuates that Betty wrote that Black Hood letter herself, Betty goes ahead and publishes the mugshot. (Take that, Mom!) Betty then asks the Black Hood if the face under the hood is someone she’d recognize. He says yes. Hmmm… intriguing.

He has more demands, though: He wants Betty to cut everyone out of her life, starting with Veronica. So at Nick’s hotel-room party, as he name-drops “Gal” Gadot and hands out sticks of jingle-jangle, Betty lashes out at Ronnie, labeling her an “airhead party girl” before storming out. (Ouch… that was a little too convincing, wasn’t it?) Ronnie’s night gets even worse when Nick makes a move on her, calling Archie a “hayseed yokel” — which, fair enough — and eventually trying to force himself on her. She slaps him and calls him “a pig” before getting out of there… but that doesn’t stop him entirely. 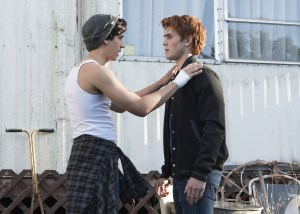 Betty tells the Black Hood she got rid of Veronica; now she wants to know how she can make him stop. He says by doing exactly what he says… and now he wants her to get rid of Jughead: “He’s not worthy of your love. Cut him out of your life, or I will.” Betty’s devastated, but she relents, asking Archie to break up with Jughead for her, hoping they can undo it later. Archie catches Jughead before his final Serpent initiation and lowers the boom — and Jughead’s heartbreak (“Betty would never do that”) is devastating to watch. Still, he’s finally welcomed into the Serpents, and even shares a kiss with Toni (no!) afterwards. 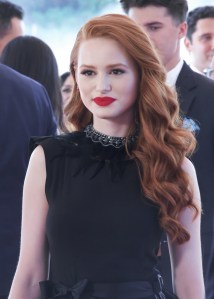 At Hiram’s open house to lure in new investors, Nick sets his sight on another Riverdale girl: Cheryl Blossom, who seems intrigued by his cosmopolitan lifestyle. They hit it off… but Cheryl doesn’t notice when Nick drops something into her drink. Yep, that little jerk tries to pull a Bill Cosby, drugging Cheryl and taking her back to his hotel room. Luckily, Veronica and the Pussycats rescue her and beat the stuffing out of that rich douche before he can lay a hand on her. But it’s safe to say Nick won’t be a member of the Riverdale gang anytime soon.

The Black Hood is pleased that Betty dumped Jughead and leads her to a creepy old abandoned house, where he promises to reveal his identity. There, she finds a gift-wrapped box with a black hood inside; he tells her to put it on and turn around. She’s facing a mirror, “to show you we’re the same,” the Black Hood says. (Wait, that’s it? Lame.) He knows she blabbed to Archie, though, and says he’s about to murder Polly, unless Betty gives him another person to kill instead. And Betty, now knowing what happened to Cheryl, gives him one: Nick St. Clair. Well, hello again, Dark Betty.

* So I’ve narrowed my Black Hood guesses down to three: Sheriff Keller, Betty’s dad Hal and her long-lost brother Chic. The killer’s closeness to Betty suggests the last two — but she hasn’t seen Chic’s face before, has she?

* When I said last week I wanted to see more of Cheryl this season… yeah, this isn’t what I meant.

* It was fun to see Archie and the gang cut loose with a little jingle-jangle, Betty’s wet-blanket act excepted. What? It’s harmless! Like Pixie Stix!

* Betty might think she and Jughead can patch things up… but can they really, after he’s kissed Toni the Home-Wrecking Serpent?

* Sorry, but I giggled every time Betty’s phone rang and “Lollipop” played. On what planet would a teenage girl have a sixty-year-old song as her ringtone?

* While we’re asking questions: What kind of school paper publishes old mugshots of random parents? Is that really relevant to students’ interests? Is there no teacher supervising this paper? You’re really dropping the ball here, Riverdale High faculty.