The Black Hood’s killing spree is driving everybody bonkers on Riverdale, leading to a violent (and very wet) throwdown between Archie and the Southside Serpents.

With the whole town on edge, wondering who the next victim will be, Archie’s gang responds by doing what they do best: Jughead hits the library to research serial killers, Archie takes his newly acquired gun out for target shooting and Veronica shows her support for Archie’s Red Circle by designing a line of cute T-shirts and handing them out at school. (It’s how she helps, guys.) Meanwhile, Betty gets a message from the Black Hood that contains a cryptogram of symbols to decipher, and a letter telling her that her speech at the jubilee is what “inspired” him. (Yikes… getting a serious John Hinckley/Jodie Foster vibe here.)

Riverdale’s adults aren’t huge fans of Archie’s vigilante video, though: Hermione forbids Veronica from seeing him anymore, and Principal Weatherbee suspends the whole football team until Archie apologizes and agrees to disband the Red Circle. Reggie and the rest of the team push him to give in, and when he won’t, they ditch him and the Red Circle. The Serpents at Jughead’s school are actually rooting for the Black Hood to keep knocking off North Siders, though. “He’s doing our work for us,” Sweet Pea says. (He’s not actually very sweet, is he?) 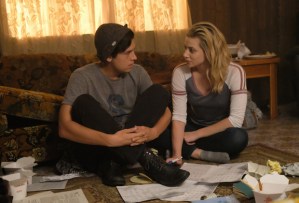 Alice publishes the Black Hood’s puzzle in the local paper, and Jughead gets a hand in solving it from his new pal Toni Topaz, who has a thing for serial killers. (And maybe a thing for Jughead, too.) He and Betty have been playing phone tag and neglecting each other, so they get together with Toni and Kevin to try and crack the code together. All they do is annoy each other, though: Toni snidely tells Betty to loosen her ponytail — Kevin’s response is perfect: “Betty’s ponytail is iconic, and beyond reproach” — and later accuses Betty of hating all Serpents, including her.

Left to fly solo, Archie can’t stop making bad decisions: He heads to the South Side, alone, to spray-paint red circles on random walls in hopes of drawing the Black Hood out. (Um… huh?) He does draw out Sweet Pea and the Serpents, who tell him to get lost; when Sweet Pea pulls out a switchblade, Archie pulls out his gun, scaring the Serpents off. Word of his gunplay gets back to Riverdale High, where Principal Weatherbee and Sheriff Keller search his locker. They don’t find the gun… but they do find the black hood Reggie wore a couple weeks back as a prank and kick him out of school. (Why oh why would you keep that in your locker, Archie?)

Hermione warns Veronica not to fall into “blind loyalty” with Archie, and Ronnie learns why when Archie asks her to go to school late at night and retrieve his gun from its hiding place in a toilet tank. Fed up with his Black Hood obsession, she tells him she threw his gun in the river. Reggie and the football team show up, thankful that Archie didn’t rat out Reggie about the hood and ready to reform the Red Circle. And just in time, too, because Sweet Pea and the Serpents show up looking for a fight. 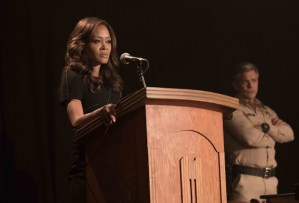 While Mayor McCoy presides over a contentious town meeting, Archie and his Red Circle dudes square off against the Serpents in an all-out brawl in the middle of a very cinematic rainstorm. One Serpent pulls out a blade and stabs Dilton in the thigh, but Veronica ends things by firing Archie’s gun into the air. (She kept it after all.) Back at Betty’s, Jughead confronts her after finding the Black Hood’s letter to her. She says she felt guilty about inspiring him, and worried that Archie would blame her for Fred’s shooting. Jughead comforts her, saying she’s like “Nancy Drew meets The Girl With the Dragon Tattoo.” And that triggers a realization for Betty.

She knows where she’s seen the Black Hood’s symbols before: They’re from a Nancy Drew code book she read a lot as a kid. (Hmmm.) They decode the message, which says, “I will strike next where it all began.” So they rush to the town meeting, which is where she Betty gave her jubilee speech, and warn everyone to get out. No one dies, and Veronica patches up Archie — shirtless Archie scene: check — telling him, “You’re not a killer” and helping him actually toss his gun into the river. A happy ending, right?

* So the Black Hood is definitely someone close to Betty. Could it be her dad Hal? (He was there for her speech at the jubilee.) Or maybe it’s her long-lost brother Chic, who we know is arriving later this season?

* Hermione and Hiram were in peak scheming form this week, with Hiram gleefully enjoying the town’s Black Hood panic (“So much chaos and confusion”), and Hermione telling him at the town meeting: “I told you Fred would be a problem” (!). What do they have hidden up their high-end designer sleeves?

* Best line of dialogue is a tie between Kevin’s aforementioned passionate defense of Betty’s ponytail, and Veronica’s reaction to Archie rejecting her Red Circle T-shirt: “Are you saying I’m not rocking this scoop-neck?”