Warning: This post contains spoilers from Wednesday’s episode of Riverdale.

Think you’re an emotional wreck after tonight’s Riverdale? The actors are, too.

“It is quite devastating,” Lili Reinhart (Betty) told reporters this week on the show’s Vancouver set, referring to the episode’s big “Bughead” twist: With the Black Hood threatening to kill more people if she didn’t comply, Betty was forced to break up with her boyfriend Jughead, sending Archie to give his best pal the bad news. Betty hoped she’d be able to undo the damage later… but a heartbroken Jughead ended up sharing a kiss with his new Serpent friend Toni.

Reinhart is quick to emphasize that Betty only went along with dumping Jughead “to protect him… She is trying to do the right thing. It is sad, because you want to tell them she is not doing it on purpose.” Still, she hopes that Betty gets a chance down the road “to explain herself, and to reconcile with him. But with the Black Hood still being a present figure in her life, it’s hard to imagine that her relationship with anyone can continue, or go back to the way it was.” 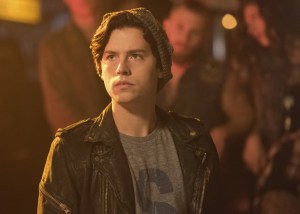 Cole Sprouse (Jughead) actually thinks Jughead wasn’t all that surprised when Archie told him Betty was breaking up with him: “He knows he’s on the Southside now, and he knows he’s been away from everyone. And I think also, Jughead has absolutely no problem seeing himself as someone who could be easily thrown to the wayside, so I think something like that probably affects him a little bit.”

Plus, the fact that Betty chose Archie to tell him just twists the knife even further for Jughead, Sprouse says: “Archie is Jughead’s weakness when it comes to Betty, because they were kind of the Three Amigos when they were young, but Betty had always favored Archie,” and “Jughead felt more like a third wheel. So Archie coming to deliver the bad news is not only a slap from Betty, but really a slap from Archie, too, which I think is something we explore a lot later.”

But what about that Jughead/Toni kiss? Sprouse initially thought Jughead should push her away, but then he decided “it would be more interesting if he didn’t, and he actually somewhat enjoyed the admiration of another young woman, which I think is quintessentially the most teenage thing to do… I don’t necessarily even think it’s sexual, so to speak. Even if it’s platonic, it’s something that’s brand-new, uncharted territory for him, and he feels excited by it.” (With reporting by Vlada Gelman)

Riverdale fans, share your thoughts/anguished screams regarding tonight’s ‘Bughead’ breakup in the comments.