This season of Riverdale has played out like a horror movie, with a mysterious serial killer known as the Black Hood stalking Archie and the gang and sending the whole town into a full-scale panic. But the question remains: Who is the man behind the mask?

So far, the show has kept the Black Hood’s identity a secret, but it’s dropped plenty of clues for us to puzzle over: We know the killer is a green-eyed man who claims to be punishing the citizens of Riverdale for their “sins.” We know he’s killed Miss Grundy and wounded Fred and Moose. And we know he has a special connection/obsession with Betty Cooper, and was inspired by her speech at last season’s Jubilee. (We also know Betty would recognize this person if she saw him.)

With that in mind, we’ve narrowed our Black Hood guesses down to three main suspects. Let’s go through each one and list the evidence that makes us think he’s the killer, as well as the evidence that seems to disqualify him. Time to do some Nancy Drew-ing… 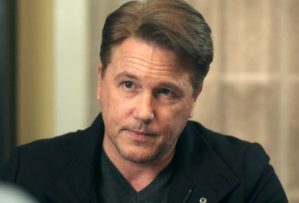 WHY HE’S THE KILLER: He’s Betty’s dad, so he’s obviously close to her. (He would also know about the Nancy Drew code book she loved as a kid.) He was in the audience for Betty’s Jubilee speech, and he’s made himself kind of scarce ever since. He could have a grudge against Alice since she kicked him out, so that would explain him forcing Betty to publish Alice’s old mugshot. And he matches the Black Hood’s physical description.

WHY HE CAN’T BE THE KILLER: It’s hard to believe he would put his own daughter Betty through such psychological torture… or threaten the life of his other daughter Polly. Plus, after Cheryl’s dad Cliff Blossom murdered his own son Jason last season, would Riverdale really spring another killer dad on us? 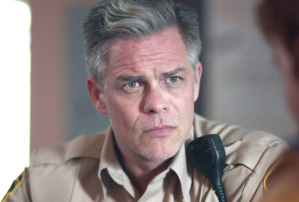 WHY HE’S THE KILLER: He’s been dragging his feet through the whole Black Hood investigation, and even accused Betty of forging the letter the Black Hood sent her. Him being the killer would explain his terrible police work this season. As sheriff, he knows very well who the sinners in town are. Plus, he also matches the killer’s physical description.

WHY HE CAN’T BE THE KILLER: As far as we know, he doesn’t have a close connection with Betty. But maybe he’s been obsessing over her in secret for years? His son Kevin is Betty’s best friend, after all. 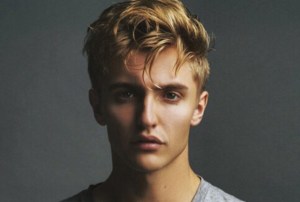 WHY HE’S THE KILLER: He’s Betty’s long-lost brother, who Alice gave up for adoption years ago, so they are closely connected. His killing spree could be his revenge on Riverdale for discarding him all those years ago. Plus, the reveal would truly come out of nowhere, since he hasn’t been seen on the show yet. (He’s slated to make his debut later this season.)

WHY HE CAN’T BE THE KILLER: Betty’s never met him, so she wouldn’t recognize his face — although maybe she would, since he is a blood relative. Mostly, though, the Black Hood looks more like a middle-aged man than an athletic young CW-type actor like Hart Denton, who’s been cast to play Chic.

Now it’s your turn to sleuth: Who do you have pegged as Riverdale‘s Black Hood killer? Vote in our poll, then hit the comments with any clues we may have missed.