Not one but two blasts from the past interrupt Claire and Jamie’s tropical getaway in this week’s Outlander, and I honestly can’t say which one tickles me more.

Is it Lord John, the newly appointed governor of Jamaica, who elicits wildly different reactions in Mr. and Mrs. Fraser when they unknowingly wind up in his home? Or is it Geillis “I’m Back, Bitches” Duncan, who is reintroduced into the action as she — and this is no exaggeration — luxuriates in a tub full of blood?

As the season starts to wrap up (next week is the finale, ye ken), the hunt for Ian intensifies. This leads to the donning of wigs, the buying of slaves, the reading of fortunes and the arresting of one James Alexander Malcolm MacKenzie Fraser.

Read on for the highlights of “The Bakra.”

BEWARE THE BAKRA | The episode starts with a rewind to the moment Ian was taken from the island. He’s hauled aboard the Bruja with his box, which is promptly commandeered by his kidnappers. “Is that what the bakra seeks?” one asks another. “Seems to be,” the other man replies. Ian struggles with them and demands to be freed, leading them to consider dumping him overboard at sea. But then one of the crew says they should keep him, because “the bakra likes young boys.” Um, Ian? Unless “the bakra” is code name for a highly selective choir, you are likely in bigger trouble than you realize.

When the ship arrives in a Caribbean port, Ian is thrown into a dungeon already inhabited by two other boys. They, too, make mention of the bakra and fearfully note that there used to be more young men there with them… but they’re the only two left. “One by one, they were taken to see the bakra. They never came back,” says the boy named Henry. 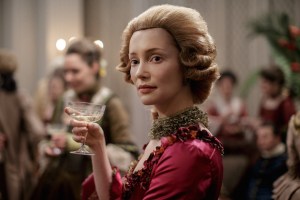 TEA AND HONESTY | So by the time Ian is taken to a bedroom on the estate where he’s being kept, he’s completely freaked out. The fact that the first thing he sees is a woman bathing in a tub of blood does nothing to alleviate his terror. “Are you the bakra?” he asks. “I am,” she purrs, and holy hell, it’s Geillis Duncan, who apparently is not dead.

She climbs out of the Jacuzzi of the undead or whatever the heck she’s got in her quarters, then rubs her skin all over like she just hit up the Bath & Body Works’ Black Friday sale. “Don’t worry, it’s only goat’s blood,” she says, but I doubt Ian is hearing anything she’s saying, given she’s doing a great job of messing up his sexual circuitry for life by sensually rinsing off the blood by dousing herself with a pitcher of water. A servant brings in a tray of sweets and tea, and though Ian demands to know what she does with the boys from the pit, he’s quickly sidetracked by the thought of actual food.

As he tears into the plum cake and pudding, she mentions that he was holding her “treasure box” when the sailors found him, and she wants to know where the missing sapphire is. He repeatedly tells her that he didn’t take it, but after a few more mouthfuls of tea, he blurts out that maybe his uncle did. (Side note: John Bell’s face as Ian claps his hand over his mouth, mortified that he’s let a secret slip, is perfect.) Geillis tells him the tea is a truth serum that a witch doctor makes for her, then asks who his uncle is. But it’s her turn to be shocked when he answers “James Fraser of Broch Tuarach.”

As Geillis advances on the teen, her robe barely fastened over her drying body, Ian promises that his uncle is coming to rescue him. “Oh, I’m counting on it, lad,” she says, slithering over him in a way that would make the snake that slept with Claire last week say, “Damn.” Then she mentions that she beds the boys from the pit and then disposes of them, because their main value to her lies in their virginity. “I’m no a virgin,” he says. “Good,” she replies, flipping her robe open. “You’ll know what to do then.”

Side note: In the book, Geillis is a large woman when we re-meet her in Jamaica. I didn’t actually think that the show would put Lotte Verbeek in a fatsuit… but is it weird I’m a little disappointed nevertheless?

A LOSING PROPOSITION | Then we catch up with Claire and Jamie, who’ve arrived in Port Royal, Jamaica, with the Artemis. They inquire about Ian’s possible whereabouts — because the Bruja has come and gone — and Jared’s local connection suggests that they hit the slave market to make inquiries. So they go there, and it’s just as terrible as you’d think: men, women and children in cages, people being branded, the whole terrible deal. As Claire tries not to vomit in disgust, Jamie gets some intel: The island’s new governor bought most of the Bruja’s slaves. 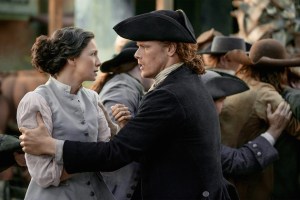 Claire strays a bit and happens upon an auction of a man who’s got something wrong with his leg. And when the auctioneer is asked about the slave’s virility, the auctioneer violates the last small shred of the man’s dignity by grabbing his junk and showing it off to the crowd. Claire (correctly) loses her mind and starts beating the auctioneer with her parasol, which starts a moderately sized hubbub. She’s crying when Jamie reaches her. “Do something. Help him, please!” she cries. So Jamie does the only thing he can think that’ll avoid a riot: He buys the man.

Claire, of course, is horrified to learn that she now owns a person. (That person’s name, by the way, is Temeraire.) “We have to free him,” she says. “Aye, we do,” Jamie concurs, but suggests that they wait until they’re somewhere where he won’t get swept up and sold again the moment he’s out of their sight. Temeraire is confused when Jamie and Claire try to explain all of this to him, but he agrees to go with them to a ball at the governor’s home that evening and talk to the slaves to try to find Ian. (Side note: The Temeraire of the TV show is a lot more #TeamFraser than the Temeraire of the novel.)

PARTY TIME | So Claire puts on a pretty yellow gown and Jamie dons a powdered wig (in order to cover his telltale red hair), and they take Yi Tien Cho, Fergus, Marsali and Temeraire to the big party. Once there, Temeraire slips off to the slave quarters to do some recon. Claire is surprised to run into Archibald Campbell, the man whose sister she treated in Edinburgh. But we’re not — earlier in the episode, we saw Geillis (who is apparently the rich patron the Campbells referenced in their first episode) fret that they don’t have the three sapphires needed for a prophecy foretelling the rise of the next Scottish king.

As they wait in line to meet the governor, Jamie and Claire tease each other how they’re not as hot-n-heavy as newlyweds Fergus and Marsali. But they give each other a look so hot you could griddle pancakes on it, so I think they’re good! Too bad the very next moment involves them coming face-to-face with the governor… and it’s Lord John Grey.

Side note: In the book, Claire meets John Grey aboard the Porpoise, and they rather like each other even though they never get around to finding out each other’s real names. Then when they meet in Jamaica, and she worries that maybe the Brit’s friendship with Jamie is a friends-with-benefitship with Jamie, there’s a whole big thing. Here, Claire certainly does not like the genuine warmth and joy that graces Jamie’s face when he sees his former warden, but it’s not the dramatics of the book.

Still, when the trio go to talk in private, there is such an extended, FULL look between Jamie and John that Claire all but has to declare, “Still here, guys.” Then, when Jamie notices that Lord John is not only wearing the sapphire he gave him but has fashioned it into a pretty embroidered pieces, John awkwardly replies, “I wear it… to remember our friendship.” GUYS. CLAIRE’S FACE. John also gives Jamie an update on Willie — all is well, and the boy kinda remembers Mac the stable hand — which clearly makes Jamie quite happy.

Later, Claire and Lord John have their own private conversation, each wary of the other. John ends it by saying, “Well, it’s certainly a pleasure to meet the love that was his every heartbeat,” WHICH IS A TOTALLY NORMAL THING TO SAY AND IN NO WAY INDICATES YOUR LOVE FOR BIG RED, JOHN, COOL COOL. 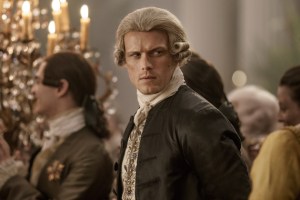 A BAD PENNY ALWAYS RETURNS | He’s saved by Claire’s spotting of Geillis. Mrs. Fraser goes white, then follows the witch outside and immediately asks why she’s not dead. “‘Twas the wee ratling that saved my life,” Geillis says, explaining that she gave birth to a baby “as warm as his father’s balls” (stitch that one on a sampler!), and Dougal helped her escape by subbing a corpse for her body on the pyre. After she found out Dougs died at Culloden — but, interestingly, not exactly how he died — she married a plantation owner named Abernathy and wound up in Jamaica. In case you were wondering, Mr. Abernathy is dead. Shocker!

“So I was right about you,” Geillis says, eyeing Claire. “Yes, you were. And you saved my life,” Claire says, totally out of sorts. Geillis feigns ignorance when Claire mentions Young Ian but says she’ll help: “What else are friends for?”

Jamie is equally rattled to see Geillis alive, but she’s just as startled to notice the sapphire she’s been looking for hanging off Lord John’s waistcoat. So she demands that the Campbells give a reading at the party, then she strongarms the governor into being their subject. That way, they have all three of the stones in their possession, which sends Margaret into a frenzy as she delivers the prophecy. Basically, it boils down to: “A new king will rise in Scotland upon the death of a child that is 200 years old on the day of its birth.” Make sense? Of course not — and Geillis doesn’t understand it, either.

INTERCEPTION | But then Capt. Leonard and his men show up, looking for Jamie, and the Fraser party exits the scene quickly. Temeraire quickly delivers the goods: Ian is likely at Rose Hall, Geillis’ house. Claire is incensed, but Jamie reminds her that Geillis IS EVIL.

Anyway, because Temeraire asks to be released to join up with the freed slaves who live in the mountains near Rose Hall, Jamie and Claire drop him off on their way to liberate Ian. But Leonard and the Redcoats quickly descend upon them just after Temeraire leaves. So Jamie presses the photos of Bree and the miniature of Willie into Claire’s hands for safekeeping, then goes with the soldiers.

Claire reads the Brits the riot act. “After all I did for you and your men?! You bloody bastard. I am the only reason any of you survived!” she cries. But Jamie’s got one thing on his mind as he is marched away: “Go. Find Young Ian!”