On the first day of Christmas, the absence of my true love gave to me: a snake slithering over me while I was sleeping. Everybody sing!

Of course, Mistress Fraser has to undergo several life-threatening incidents before the happy homecoming takes place. There’s the aforementioned serpent going to second base, as well as a swarm of highly impertinent ants and near-death from dehydration, not to mention the eccentric priest who seems like Claire’s best hope… until he starts talking to a coconut.

Read on for the highlights of “Uncharted.”

THE CASTAWAY | We catch up with Claire as she’s afloat on the ocean, draped over her barrels, apparently sleeping as she bobs with the waves. When a big one comes, it flips her over and inadvertently wakes her up; as she sputters and coughs after surfacing, she realizes she’s very close to shore.

Claire staggers through the shallows, finding her bundle of clothes has already washed up on the sand. As she lays her things out to dry, she voiceovers that she has no idea where she is, and worse, she has “no idea where or how I would find Jamie.” She’s also got no drinking water, save some leftover dew that she finds on a few leaves in the shade, and the sun is unforgiving. While she wanders, Claire has exactly one win: starting a fire using a spark and the stuffing from her bum roll. She also has about three million losses, including the aforementioned giant yellow snake that’s sliding across her chest when she wakes up one morning in the wilderness and the fire ants that make a feast of her legs while she snoozes another night.

Eventually, our parched heroine is a dirty, lightheaded, freaked-out and oozing (thanks to those bug bites) mess. And when she comes across a man preaching in the distance, she faints.

COCO LOCO | Claire wakes in a hut of some sort, tied to a bed. A woman comes in and tells her in Spanish that she’s restrained for her own good. Later, a man — the priest Claire saw earlier — enters the room and explains that Mamacita (the woman) thought it best to restrain the patient to stop her from clawing at her shins. The priest, who introduces himself as Father Fogden as he unties Claire, tells her she’s on Saint-Domingue, an island east of Jamaica. The cleric seems like her best chance at getting to Jamaica to meet up with Jamie — and to warn him of his impending arrest — until the old man starts talking to a coconut he calls “Coco.” Claire’s facial expression is best summed up by three letters: W, T and Jesus H. Roosevelt Christ F? 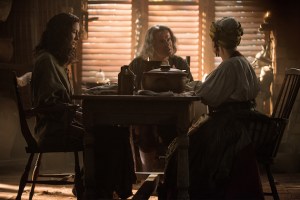 RINGS A BELL | So while she tries to figure out a way to get to the next island, Claire bathes in an outdoor tub (and smiles for the first time all episode), dodges Mamacita’s unconcealed disdain and gets Father Fogden’s backstory. He was in Cuba, “tending to the souls of the poor,” when he met his beloved Ermenegilda. She was married, so they ran away to Saint-Domingue with her mother, Mamacita. But Ermenegilda got sick and died soon after they arrived. He’s still very sad about it, but it’s hard sometimes to distinguish his genuine grief from his weirdness and/or his near-constant high, thanks to the wacky tobacco he smokes.

Claire is seemingly no closer to her goal of meeting Jamie when Mamacita freaks out: one of the household’s prized goats has been killed and eaten by a Chinese sailor. Claire is momentarily distracted by Fogden’s mention of Abandawe — turns out, the words crazy Margaret rambled at Claire back in Edinburgh refer to a “place of great power” nearby, Fogden tells her. “It is said that folk disappear there.” Innnnnteresting.

But then Claire picks up on Fogden’s “Chinaman” comment and realizes that there’s a good chance the sailor is question is Yi-Tien Cho. And upon hearing that there are broken sails and a lot more sailors on the beach, she takes off at a run.

SOS (SAVE OUR SASSENACH) | Turns out, the Artemis’ foremast broke, and the ship is stopped at Saint-Domingue for repairs. And because several members of the crew (including Capt. Raines) died in the accident, Jamie has become the de facto ship’s leader. But the repairs are done and Jamie & Co. are back on the ship before Claire can get to the beach, even though she runs so quickly she rips her arm open on a branch along the way.

But Claire smartly grabbed a small mirror from Father Fogden’s place before she left, and she uses it to angle the sun to catch the ship’s attention. And when Jamie sees flashes coming from the beach, he uses a spyglass to catch a glimpse of his lady waving wildly on shore.

Big Red can’t get there fast enough. Once he and the men row back, Jamie runs to Claire and they kiss, finally reunited once more. “I feared I’d lost you again,” he says, only realizing after the fact that she’s bleeding profusely from the arm. “MacDubh’s wife turns up in the most unlikely places, does she not?” one of Jamie’s Ardsmuir men remarks as the former Lord and Lady Broch Tuarach get reacquainted. It’s funny because it’s true.

As Yi-Tien Cho stitches Claire’s arm, she fills Jamie in about Capt. Leonard’s plan to turn him in. Maybe he’s still on a high from actually being within arm’s length of his wife again, but Jamie seems really unworried about that particular threat. Instead, he wants to talk Fergus and Marsali’s upcoming wedding. “He loves her as I do you, Sassenach,” Jamie says, explaining that he’s finally given the youngsters his blessing. She nods, clearly thinking, “That’s nice and all, but my wound is probably festering as we speak.” Side note: Aside from the near-constant puking, sea life seems to agree with Jamie, who looks particularly strapping with his shirt askew like that. If the Frasers need somewhere to stay that night, may I suggest that they take shelter in the cleft created by Jamie’s bulging pectorals? 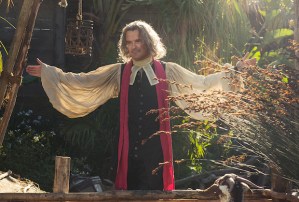 I NOW PRONOUNCE YOU… | So the wedding is on! While Marsali is getting dressed, she gets over her hatred of Claire long enough to ask whether La Dame Blanche knows how to have sex without making a baby. “I would like one, someday,” the blonde quickly clarifies. “I want to be happy with Fergus the way you are with Daddy without having to worry about a bairn.” Then Marsali calls Claire a wise woman, which is decidedly different from the last “w” word she flung in the sassenach’s direction, so this is definite progress. Claire promises to brief her kinda-daughter-in-law-to-be on the ins and outs (pun intended) of 18th-century procreation when they get back to the ship. “Maybe you’re not the devil, after all,” Marsali says, smiling a little bit.

Because Yi-Tien Cho has made nice with Mamacita and the priest, the wedding moves along as planned. Finally, it’s time for the couple to marry. The father is high as Fogden, Fergus is wearing his fanciest scarf, and Claire and Jamie are kvelling from the sidelines. It’s all going relatively well until Father Fogden says that Fergus needs a surname in order to get married… and the former brothel orphan says he doesn’t have one.

“Fraser,” Jamie pipes up from the corner. “His name is Fergus Claudel Fraser.” And I think everything progresses well after that, but I’m too busy crying happy tears, so you’re on your own.

TURTLE’D! | Back on the Artemis, Claire is loopy and grinning as she downs some of Yi-Tien Cho’s turtle soup. Jamie notices that his wife is burning up, and she says she’s aware: She’s asked him to fetch her penicillin kit because her arm is infected, and she needs to rectify that. Once she stabs herself in the buns — because she’s a beast, and also a little drunk on the sherry in the soup — she’s got a new idea: “Bolt the door.” Yep, it’s time for the Frasers to get their freak on. Jamie demurs for, like, five seconds until Claire grabs him by the anchor and chain. “Ye do have a very healthy grip for someone with a fever,” he notes… and they’re off! The door is locked. Clothes are doffed. Giggles are stifled. And the Frasers literally go at it right up against the door, pausing only slightly when Yi-Tien Cho comes to check on First Wife. The episode goes to black with Claire and Jamie being sexy and silly and so obviously enamored of each other, and yeah, Outlander: This is how I like my Frasers.