“We’re so close,” read a letter from Rick to his allies in Sunday’s episode of The Walking Dead. “This can be our last fight.” But if it ain’t over till the fat lady sings, he was starting his victory lap a mite early, considering the fate that befell the “character” in question in “The King, the Widow, and Rick.” And not only was the fat lady headed for a mess of hurt, but two regulars wound up under lock and key — one of them in the buff — another trio was brazenly disobeying orders, and yet another character was serving up an outta-nowhere Terminus throwback. What the what? Read on!

‘IT’S SCARIER THAN I THOUGHT IT WOULD BE’ | At the start of the hour, it was established that the different communities had become post-apocalyptic pen pals, trading not only intel but words of inspiration. The main takeaway of the missives: War is hell, but in Rick’s estimation, “we’re winning.” While he moved on to the next step of the allies’ plan — the previously-hinted-at meeting with the Scavengers — everyone else was to prepare to convene on the Sanctuary in two days’ time in order to stick a fork in the villains. Which sounded mostly pretty good, right? Unfortunately, Michonne wasn’t dealing well with warming the bench while a war was raging outside of Alexandria. So, with Rosita in tow, she drove off to see for herself that the Saviors were, as Rick had written, trapped by walkers in the Sanctuary. It wasn’t the smart play — both women were still on the mend — but Michonne couldn’t help herself. Ever since Rick & Co. had taken off to do battle, a “siren’s been going off in my head,” she said. Or was that just opera? On the road, Michonne and Rosita heard music… too faint to reach the Sanctuary and lure away the walkers, but nonetheless, disturbing enough to require them to investigate. 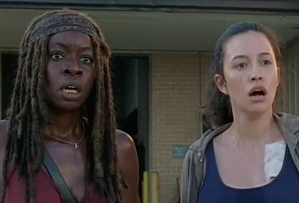 Lo and behold, the duo discovered two Saviors — one male, one female — working on the fat lady, which turned out to be a truck with enough stereo speakers in back to drown out Lollapalooza. If the baddies got her on the road, she could divert the walkers from the Sanctuary and send Rick’s plan south faster than a goose in winter. Alas, Michonne and Rosita’s fight with the Saviors wasn’t a slam-dunk. Michonne’s injuries left her vulnerable to the female Savior’s attack, and though Rosita bazooka’d — yes, bazooka’d! — the male Savior out of existence, his partner in crime burned rubber in the fat lady… only to have her getaway immediately halted when she was rammed by a truck driven by… Daryl, whose new thing is apparently always being there when villains are trying to make getaways. “Jesus, that was too close,” said Rosita, clearly not having gotten the memo about Daryl’s sudden penchant for showing up just when baddies are attempting to escape. Aside from engaging in his new hobby, what were he and Tara doing out there? They’d decided that maybe they didn’t have to wait until the war was over to avenge Dwight’s murder of Denise. To that end, it appeared that they were ready to “end this thing right now” by defying Rick and (as far as I could tell) driving a truck full of explosives into the Sanctuary. 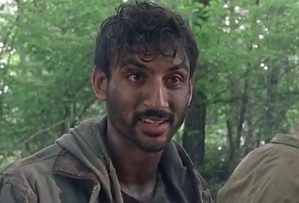 ‘SOMETIMES KIDS HAVE TO FIND THEIR OWN WAY’ | Meanwhile, in the woods outside of Alexandria, Carl tracked down a leery Sadiq (who wasn’t named Abbud, as initially thought) and offered him food and water, as well as an explanation for why Rick had opened fire at their first near-meeting. He hadn’t been trying to kill the stranger, those were just warning shots, the teen said. So, not the world’s most comforting ice-breaker, but under the circumstances… In no time, Carl was asking Sadiq the big three questions about how many walkers he’d killed (237-ish), how many people he’d killed (just one) and why he’d killed that person (because the dead hadn’t quite done so). When Carl inquired why his new friend had dispatched so many walkers, Sadiq answered that he did it to honor his mother, who’d hoped that doing so would free their souls. One must always honor one’s parents, he added. Ha, Carl practically said. If he was honoring his father’s wishes, he for sure wouldn’t be bringing Sadiq back to Alexandria. He also wouldn’t have been risking his neck along the way to dispatch walkers for Sadiq’s mom. “You could’ve left” when it got dangerous, said the newcomer, stunned to have made such a steadfast acquaintance. “I’m responsible for you now,” Carl replied. “That’s how it works.” 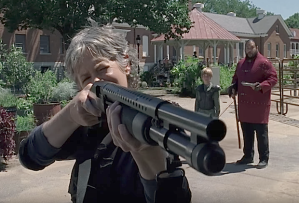 Speaking of youngsters, over at the Kingdom, Henry — after overhearing Carol trying to get past Jerry to crash Ezekiel’s pity party and drag him to a confab with Rick — trailed her into the woods and nearly got himself turned into Sam 2.0. After saving him, she pulled out one of her favorite scare tactics: “Do you know what happens to kids when they go wandering around in the woods?” Whatever, Henry said. He could fight. Moreover, he wanted to. Had to. “I have to get the guys who killed my brother,” he argued. In the end, Carol relented, giving him a gun. But she either forgot where she was going or decided to abort her mission for the moment, because next thing we knew, we were back at the Kingdom, and she was ready to shoot open the door to get to Ezekiel. That is, until Jerry pointed out that, “Yo, the door’s not locked.” In that case… As expected, Carol found that Ezekiel was not in a good way. “I can’t be what [my subjects] need,” he insisted in so many different ways that, finally, Carol started to leave. Then, instead, she turned around and asked why he’d kept coming to visit her on the outskirts of the Kingdom. “You just… made me feel real,” he admitted. Reduced to tears, she assured him that he was real, not only to her but to his people. And now it was time for him to do what he did best: put on a show. She did it herself every day. “We just have to act like everything is normal until it is,” she said. “It’s what they need, and it’s what you have to give them.” Still, he insisted that he couldn’t. 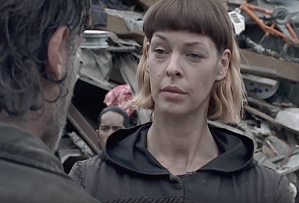 ‘BUILD A GALLOWS ALREADY!’ | Over at the Hilltop, Jesus and Maggie clashed over the prisoners that he’d delivered to her doorstep like so many unexpected guests at Thanksgiving dinner. When the war is over, he argued, “we have to make sure what’s left is worth what we lost.” Maybe. But she wasn’t ready to rule out any option — including Gregory’s suggestion of a hangman’s noose. (Not helping the prisoners’ cause one bit: Jared, who refused the turnip Jesus offered and continued to wear an expression that screamed, “I need smacking.”) Later, when the Hilltop’s former leader tried to suck up to its current leader by commiserating over her “hippy-dippy, kung-fu-fighting friend” and his inability to understand that one couldn’t let foxes run around the henhouse, Maggie had a lightbulb moment. Cut to: Jesus and prisoner Dillon getting awfully worried overnight as construction went on inside the gates of the Hilltop. The next morning, they discovered that Maggie had had a pen built. The prisoners would be kept in there — fed and treated well, so long as they cooperated. And since Gregory had been right, Maggie couldn’t let people she didn’t trust run around the community, she ordered him thrown into the pen as well. Afterwards, she informed Jesus that she was only keeping the Saviors “alive ’cause we might need ’em” as bargaining chips down the road. “If we don’t,” she added, “we can’t let ’em live.”

While all of this was going on, Rick knocked at the Scavengers’ door, and once he and Jadis were done debating whether she’d shot or merely grazed him, proposed a new deal: “Forget Negan, switch sides again and be a part of the next world,” he said, offering up photographic evidence that the Saviors were already as done for as they could get without beginning to rot. Or, since he had the numbers to make good on this threat, “we destroy you.” In response, Jadis passed and had Rick stripped down and tossed in a shipping container. Outside it, she wrote an “A” — as in the Termians’ favorite letter and the letter of the train car in which the cannibals once held Rick & Co. prisoner. Coincidence? Hit the comments with your theories. Are the Scavengers an offshoot of the Termians?