If this ship’s a rockin’… you can go ahead and knock. Or do whatever else you like. Because this week’s Outlander takes place almost entirely on a ship, and it rocks, sways and bobs. A lot.

And because of that, James Alexander Malcolm MacKenzie Landlubber Fraser is a bit green — and worse — throughout the hour. But that’s hardly his and Claire’s biggest problem in “The Doldrums,” given that they encounter forced separation, pestilence and near-mutiny within the course of the episode. (At least they’re able to get a little sun on their faces in between.)

Read on for the highlights of this week’s Outlander.

ALL ABOARD! | As Claire and Jamie prepare to set sail and look for Young Ian, Cousin Jared fills them in with the intel he’s gleaned: Ian is likely on a ship called the Bruja, whose homeport is Jamaica. Jared seems very optimistic that they’ll be able to find the teen on the Caribbean island, because he’s healthy and strong, so he’ll be a good candidate to be sold as a slave. (Side note: When slavery is your best outcome, you are well and truly screwed.) (Another side note: Dear Diana Gabaldon, when you are done with Go Tell the Bees That I Am Gone, I wouldn’t mind a novella about the ever-resourceful Jared Fraser. He’s gotta have some stories worth telling, right? Please and thank you.)

Jamie confides in Claire that he thinks God is punishing him for wanting to be happy, and though she quickly dismisses that rationale, there’s still a little weirdness between the two of them. But that’s stuffed away for another time as they board the Artemis, alongside two of Jamie’s Ardsmuir men, as well as Fergus and… Marsali?!

Fergus announces that they were married — well, handfast, which is a sort of placeholder ceremony — and that they’ve been courting since the previous August. Jamie is Not. Happy. About. This. Development., especially after Marsali says she’s already written Laoghaire to break the news. “She’ll have me killed,” he mutters. But the blonde is just as feisty and calculating as her mum: Even though she’s still a virgin, if Jamie won’t allow their union to stand and sends her home, she threatens to tell everyone that she slept with Fergus. “I’ll either be married or ruined,” she says, gloating as she realizes she’s won.

But Jamie doesn’t mean to make it easy on the pair. He decrees that he and Fergus will share one cabin, Claire and Marsali the other. “I’m obliged to protect her virtue,” Jamie says when Claire protests. “Mine as well, it would seem,” Claire snarks. Oh, and remember how Marsali hates the woman she believes broke up her parents’ marriage? Based on how much delight she seems to take in referring to Dr. Randall as a “whoooooooore,” that hasn’t changed one bit. 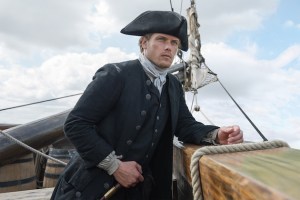 IT AIN’T EASY BEIN’ QUEASY | All of the ship’s regular crew, save Captain Raines, are very unhappy that the Frasers are aboard. Redheads and women are bad luck to the superstitious sailors, we learn, but Jamie has a tough time caring about that because he’s soon overtaken with a very nasty bout of seasickness. (Side note: Reading this section of the book is gross, but watching it play out — complete with the unsteady camerawork, and the knowledge that Sam Heughan really was nauseous during filming — nearly did me in. Also please know that I watched this entire episode scanning Jamie for warning signs that he was going to hurl so I could avert my eyes in time. Fun!)

While Jamie is retching into a bucket and yelling at Fergus about Marsali, Claire dines with Capt. Raines. Things we learn during their meal: The captain is educated (he quotes Shakespeare), bare boobs are the key to a smooth voyage (yeah, really) and though the captain doesn’t necessarily share his men’s superstitions, he understand them — and how elemental they are to a successful journey. For instance, the crew made a point of having everyone touch a lucky horseshoe nailed to a post, even though (as Claire points out) it has no real meaning. “Believing something doesn’t make it real,” she scoffs. “On this ship, it does,” he replies.

A SPEEDY RECOVERY | Soon after, at breakfast, Jamie is very much himself again. Claire thinks it’s because her ginger tea has helped him, but we later find out it’s that Yi Tien Cho/Mr. Willoughby has stuck him full of acupuncture needles. Whatever works! She’s amused, but he rather seriously — well, as seriously as he can muster, given the sharps placed all over his face — admits he didn’t tell her because “We aren’t on the most stable ground, are we, Sassenach? I didn’t want you to see it as more proof you didn’t belong here.” She’s touched, and she makes it clear that her return has been “confusing and frustrating, but it’s never been a question of whether I love you.” He’s placated, and they kiss, while I feel like a traitor as I remember her LITERALLY saying in the last episode that maybe her coming back was a mistake. How’s a guy supposed to interpret that, Lady Jane?

Regardless, any weirdness that remains between (the former) Lord and Lady Broch Tuarach dissipates as their sea travels continue. There’s a lovely scene at night on deck where they kiss and talk about Bree, and even though Claire liberally quotes from Goodnight Moon which is one of the most overrated children’s books of all time, I’m into it. “You miss her?” Jamie says as they stare up at the sky. “Terribly,” Claire says, choked up. 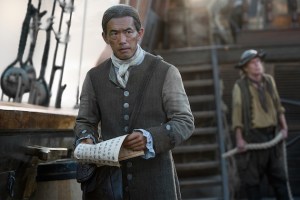 WIND WOES | Problems arise when the wind propelling the ship abruptly stops, leaving the Artemis bobbing in the sea like a cork. Then the bilge contaminates most of the drinkable water on board, which puts everyone into a panic: They’re hundreds of miles from shore, with dwindling hydration and no idea when the wind will pick up again. It doesn’t take long before the men demand a “Jonah,” aka a scapegoat they can toss overboard to reverse their fortune. And when the sailors hone in on Hayes, one of Jamie’s Ardsmuir men who confesses that he didn’t touch the horseshoe at the start of the trip, it doesn’t look good for the Scot.

So he gets drunk and climbs up in the rigging, threatening to throw himself into the sea. The Artemis crew is cool with that, but Jamie isn’t, so he clambers up there after his friend. Things are getting really tense and ugly on deck, and Hayes nearly falls off the mast after deciding not to off himself, but Yi Tien Cho steps in at the exact right moment and saves the day.

How, you ask? As the crew’s bloodthirst reaches its height, he loudly launches into his life story. And as he describes how he gave up a life as a poet to Chinese royalty — because he didn’t want to undergo the castration that came with the post — the men become transfixed. There’s a lot more about how the erstwhile Mr. Willoughby is angry about his lot in life and how European women are hairy like bears, but all you really need to know is that his performance (which ends with him tossing his written account into the water) defuses the situation, and just as he wraps his recitation, the winds pick up again. Divine providence? Not quite, Jamie says, low-voiced, in admiration of his friend’s savvy: He saw a pelican flying low over the waves and recognized it as a sign that rain — and the accompanying winds — were on their way.

THE LOOOOOVE BOAT | With the wind and water situations solved, Jamie and Claire go belowdecks… so they can go belowdecks, if you know what I mean. In the hot and crowded cargo area, they make good use of the relative privacy and go at it right on top of a burlap sack of grain or something. Fun, totally professional story: Because I admire this show’s dedication to depicting female sexual pleasure, I was trying to discern — FOR JOURNALISM — whether or not Jamie had made a point of putting his hand somewhere important during the scene. But my screener kept skipping at that point, so I kept rewinding it, only to have it skip again. Did I mention I was watching in the office? On my 27-inch computer screen? To the casual observer, it must have looked like I wanted to make a dirty GIF but lacked the technical know-how to create one.

Anywhoooo, as they lay there afterward, Jamie tells Claire he likes seeing the gray streaks that are emerging in her hair. “If you would say that in the 20th century, you would be the king of all men,” she muses. The Frasers are rather cute as they agree that the special thing that exists between them “never changes,” as Jamie puts it. 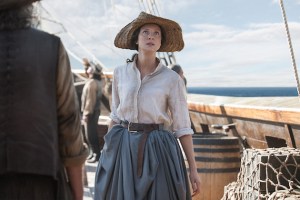 THAT’S SICK | I hope you enjoyed that happy respite for the Frasers, because life is about to get worse. When a British war ship approaches, that ship’s captain boards the Artemis and begs for help: A bout of “ship’s fever” has overtaken the vessel; 80 are dead and a lot more are sick. Claire quickly volunteers to take a look, but Jamie pulls her aside. “Are ye mad? You can’t set foot on a ship with plague,” he warns, but she’s pretty sure she’ll be dealing with typhoid, and she reassures him that she’s had a vaccination and can’t catch it. And when Jamie realizes there’s no talking his wife out of her sworn duties, she kisses him and goes with the British captain.

Aboard the sick ship, a very gross visit to the crew’s quarters confirms what Claire feared. (Side note: And the Emmy for ADR Achievement in Hurling, Retching and Splashing goes to whoever handled this incredibly gross episode.) Claire is matter-of-fact when she briefs the captain: Most of the sick will die, and the only way to stem the spread of infection is through stringent attention to disinfection and cleaning of the ship. She agrees to stick around for a short time, “to help you organize yourselves,” and that seems wise, given that so many of the more experienced crew members have died and the place is basically being run by children.

But while Claire is talking to the less-than-receptive ship’s cook, the boat starts moving. “You can’t just kidnap me like this!” she cries, realizing that the Artemis — and Jamie — are quickly slipping away as the man-of-war sets sail. “You may be our only chance,” the young captain says, apologetic but resolute, and promises that she can reunite with her husband in Jamaica.