Where is an ill-wish when you need it?

Yep, this week’s Outlander finally introduces us to the wife that Jamie’s been keeping from Claire… and it’s Laoghaire. If you by some chance are just dropping back into this series after a while (aka if the mention of that name doesn’t instantly invoke a burning rage), she was the young woman at Castle Leoch who had such a huge crush on Jamie, she nearly sent Claire to the stake for witchcraft.

Long story short: She’s a total pain in the kilt. And the rub of this week’s episode, “First Wife,” is that it kind of makes me feel bad for her. Well, at least until she pulls out a gun and shoots Jamie.

We’ve got a lot to get to, no? Read on for highlights from the hour. (And make sure to read our post mortem debrief with Sam Heughan, Caitriona Balfe and Nell Hudson, too.)

NOT-SO-WELCOME HOME | As he promised at the end of last episode, Jamie returns Young Ian to his mother and father at Lallybroch, with Claire in tow. “It didn’t appear that anything had changed,” Claire voiceovers as they ride up to the house. “But somehow, nothing felt the same.” That might be because Jenny is a) livid that her brother lied about her son’s whereabouts for such an extended period of time, and b) giving former bestie Claire the stinkeye every chance she gets. Ian isn’t pleased, either, but he gets past his anger as he and Jamie enjoy watching Young Ian do some gross chore involving poo.

Not so for Jenny, who demands that Jamie tell her what exactly happened to make him think Claire had died and vice-versa. He parrots the approved story — colonies, etc. — but Jenny’s far too sharp for that to fly. She recalls when Jamie got taken by the British and Claire and she rode day and night to find him. “The Claire I kent would never have stopped looking for you,” she sniffs. 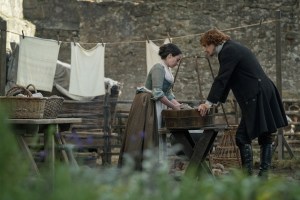 ISLAND TIME | Jenny’s frostiness is a large part of the reason Claire’s not very excited later, when they’re alone and Jamie floats the idea of building a cabin on Lallybroch land and living there. “Jenny casts a very warm light on those that she trusts, and a very cold shadow on those that she doesn’t,” the sassenach points out, looking worried. She suggests that they just tell Jenny the truth, but Jamie vetoes that quickly: Murtagh believed them because he was a traveler with a rather wide worldview, Fraser says. But a provincial woman like his sister isn’t likely to be able to understand. It’s condescending and a little ridiculous of him — aren’t highlanders notoriously superstitious, and haven’t we already established that there are many tales of people wandering off and disappearing for years? — but he’s disappointing in a lot of ways in this episode, so in the interest of time, we’ll just leave that be for now.

As Mr. and Mrs. Fraser are talking, he tells her about Duncan Kerr’s ramblings about La Dame Blanche at Ardsmuir. He relates what we’ve never actually seen, AKA where he went when he escaped the prison. In flashback, we watch Jamie brave the frigid waters surrounding the island Duncan mentioned. Though Claire is (of course) not there, Jamie does see a MacKenzie crest, which leads him to a hidden box of treasures. That’s where he got the sapphire that he gave to John Grey when he returned.

And while he’s telling her stuff she doesn’t know, Jamie realizes, it’s time to come clean with Claire about the secret he’s been keeping. “You must listen with all your heart,” he says, and before she can say anything, the door pops open. “Daddy, who is that woman?” a little girl with red hair cries. (Side note: In the book, this needle-scratch moment also happens when Claire and Jamie are in the bedroom, though he’s engaged in one of his favorite activities at the time. It’s hilariously shocking. I kinda missed it here.)

IN WHICH JAMIE DOES NOT COME OFF SMELLING LIKE ROSES | As if that’s not enough of a shock for poor Claire, the little girl’s older sister quickly runs to her side, followed by Laoghaire. “Sassenach witch!” she cries, while Claire is gaping like a fish, physically unable to process the shock. “Daddy?” she whispers, confused. “He didna tell ye? He’s my husband now,” Laoghaire spits. (For Nell Hudson’s thoughts on the episode, make sure to click here.)

Jamie hustles his sidefam out the door and downstairs, where he tries to explain to his younger stepdaughter, Joanie, that “your mother and I, we do not have a bond that keeps people together forever” — but that he does have it with Claire. Yeah, way to be reassuring, Big Red. “I’ll always look after you. I promise,” he adds, hugging the girl.

Upstairs, Jamie finds Claire hurriedly getting dressed. “The lasses aren’t mine. I’m not the father,” he states, explaining that Laoghaire was a widow twice over, with two daughters (Marsali is the older one), when they wed almost two years before. And most of the time that they’ve been husband and wife, they lived apart. Claire’s like, that’s nice. SHE TRIED TO HAVE ME KILLED. Then he says the absolute dumbest thing he could in the moment, which is, “You’re the one who told me to be kind to the lass!” And when he tries to physically stop her from leaving the room, the haggis hits the fan.

He says he’s a coward who wasn’t entirely forthcoming about his life because he was afraid she’d go leave. Then he says he’d sacrifice anything to see her again, “even though you left me.” Allow me to channel my former work husband Michael Slezak when I say: OOOH GURL. “You forced me to go back!” Claire (rightly) points out. They’re up in each other’s faces, and with the combination of Jamie’s agitated breathing and those breeks, JAMMF most closely resembles Beast as he discovers Belle has been snooping around in the west wing.

Eventually, his manhandling turns into kissing, which she fights… until she doesn’t. Claire rolls on top of Jamie and they’re both fumbling with clothes and parts and such until Jenny throws some cold water on them. (Ha!) But the moral highground is a narrow ledge, and there’s not much room for Jamie’s sister on it after Claire learns from her niece, Janet, that Jenny (!) was the one who sent for Laoghaire, forcing Jamie’s revelation. 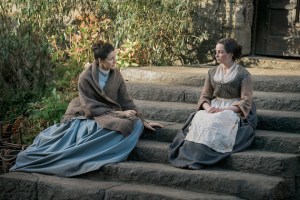 AW, SHOOT | When Claire confronts Jenny, the latter looks only slightly ashamed at her actions. She’s interested when Claire mentions having another husband in America, and how the union was “a matter of survival.” “I can see in your eyes there’s still something you’re keeping from me,” Jenny wisely notes, adding that a horse’s leg will never heal right once it’s broken, “and neither will we.”

So the next morning, Claire prepares to leave, meeting Jamie’s protests with his own words from Season 1: A marriage can sustain secrets, but not out-and-out lies. While they’re arguing, Laoghaire shows up in the dooryard with a gun. “I’ve come to protect what’s mine!” she shouts… then accidentally (?) shoots Jamie in the shoulder. The best part of this scene is Sam Heughan’s face after Fraser takes the hit: It is the face of a man who thinks life was simpler when he lived in a brothel, smuggled booze and lived with the distant yet constant fear of hanging.

WHAT COULD GO WRONG? | There’s a lot of birdshot lodged in Jamie’s body, and though he insists he’s fine, Claire reminds him that germs are no one’s friend. So she gets him drunk and lays him out on the dining room table like her own personal game of Operation while she removes all of the shot from his arm. Young Ian is the only one who sticks around to help her, the rest of the Murrays apparently having said Peace! to the idea of surgery where they usually butter their bannocks.

When Jamie wakes, he’s trying to be cute, but Claire is all business, no sympathy. But she does listen as he explains the Laoghaire situation. They reconnected at Hogmanay at Lallybroch after he came home from Helwater, and it was the first time he’d felt anything approaching happiness since she left. He thought Laoghaire and her kids could help him fill the loss he felt over the absence of Claire and his children. But things didn’t go well — “I couldn’t bear the thought of someone being afraid of my touch,” he says — and he left for Edinburgh

It’s at this point that Claire realizes he’s fevered, and she takes great joy in painfully jabbing his buns with her giant hypodermic full of penicillin. Still, she doesn’t leave. And when Ned Gowan shows up, Claire is very much a part of the “How do you solve a problem like Laoghaire?” conversation.

Bottom line: Laoghaire wants alimony, which is fine, except Jamie doesn’t have the money. But he knows where he can get it — the box of riches on the island. Because he’s injured, Young Ian volunteers to swim out and retrieve it. And because they know they can’t keep him on the farm forever, Jenny and Ian give their son permission to do so, and then to accompany Jamie and Claire to France to seek Jared’s help in selling the ancient coins and precious stones.

Later, as Ian swims, Claire voices some pretty large doubts. “I’m afraid this is all a mistake. I’m just not sure if we belong together anymore,” she says, but he’s sure that they’re right for each other, even now. “Will you risk the man I am for the sake of the man you once knew?” he wonders. But before she can answer, they realize that a massive ship has pulled up alongside the island. And while Jamie and Claire watch, helpless, from the bluff, a rowboat full of sailors nabs Ian and the box, returns to the larger vessel and sets sail!