So uh, what’s all this about another wife now?

Sure, other important stuff happens in this week’s Outlander. Jamie’s shop burns down. Someone dies. Ian shows up. But let’s focus on what’s important here: There’s another Mrs. James Alexander Malcolm MacKenzie Fraser running around out there, and if you, I, Fergus and the Ians know, it’s only a matter of time before La Dame Blanche finds out, as well.

Who could it be? Of course I know, as does any Oldlander who’s read Diana Gabaldon’s Voyager. But for the purposes of this recap, and on behalf of the Newlanders, let’s just pretend that we don’t, aye?

Read on for the highlights of “Crème de Menthe.”

HAVE A GOOD TRIP, SEE YOU NEXT FALL | When we jump back into the action, Claire is very seriously missing the 1960s, if only because in her own time, she didn’t get near-raped fortnightly. She grabs a small knife and slashes at her attacker, and she nicks him, but it really only serves to make him madder. As they fight, he backs up, trips on something and falls so that his head hits the fireplace’s stone hearth. Hard. “Sassenach,” says Jamie, who’s just returned, “what the devil happened?”

Claire is relieved when the man turns out not to be dead, just gravely wounded. “I can’t let him suffer. I have to do something,” she says, confounding her husband, who can’t understand why she’d want to heal someone who was actively trying to kill her five minutes before. “Because I’m a doctor,” she says in a dinna-mess-with-me tone.

After Young Ian, Fergus and Madame Jeanne show up, Jamie searches the unconscious man’s pockets to learn that he’s John Barton, an exciseman — it seems that Sir Percival has sent Barton to find proof of the extracurricular smuggling he (correctly) accused Jamie of in the previous episode. “So he’s a crooked agent of the Crown, then?” Claire says. Then Madame Jeanne joins in the Clunky Exposition Party by reminding everyone that the casks of liquor Sir Percival wants to find are hidden in her cellar. So Jamie tasks Fergus and Young Ian with selling off the booze, at a loss if they have to, in order to get rid of the evidence. And Claire informs Jamie that she’s going to the apothecary to get the necessary goods to drill open Barton’s head and relieve the pressure. “Stubborn as always,” he mutters, and he certainly doesn’t agree with Claire, but he doesn’t stand in her way.

DRILL BABY DRILL | When Claire returns, she’s snippy to Jamie — who’s basically sitting on a conscious and confused Barton’s chest in order to keep him from fleeing — and eager to get to work. Just then, Sir Percival and a thug with only one good eye show up at the brothel, demanding to search the cellars. So The Printer Known as Alexander Malcolm pastes on his best nothing-to-see-here smile and goes down to deal with them while Claire engages in a little light brain surgery.

With Yi Tien Cho as her scrub nurse, Claire begins boring into the man’s head. It is a distinctly different experience than the last time someone got drilled in this bed. And even though the surgery is successful in relieving the pressure on Barton’s brain, it’s all for naught: He dies anyway, which really bothers Claire. And what irks her even more is that when Jamie returns after deterring Sir Percival, he just doesn’t understand. “I’ll not grieve for the man who tried to kill my wife,” Jamie says, reminding her that there’ll be plenty of other people for her to heal.

Claire seems to come back to herself a little bit then, realizing how much drama she’s caused for Jamie in the, what, 24 hours? since she’s been back. But he quickly stops her. “I’m grateful that you are here, no matter the cost. I would give up everything I have for us to be together again,” he says. “Don’t you see? Since you left, I’ve been living in the shadows. And you walked into the print shop and it was as if the sun returned and cast out the darkness.” And for that lovely monologue, Jamie is rewarded by Claire smiling and then remembering that she’s gotta go see another patient. Byeeeee!

ABANDONWE ALL HOPE | To whom could she possibly be attending, you wonder? It’s Margaret Campbell, whose brother Claire cut in front of in line at the apothecary’s shop. (Her gratis visit is a make-good for his inconvenience.) Margaret is “soft in the head,” Archibald Campbell informs Claire: If the woman isn’t staring into space, she’s having screaming fits. He wants something to calm her down, because they’ve got a long ship voyage to the West Indies coming up. Claire writes out a few recipes for calming teas and such, but there’s not much she can do.

In fact, the most remarkable thing about the visit is the way Margaret reacts the first time Claire touches her. The woman, whom Archibald claims is a “seer,” gets very agitated and starts moaning about tree frogs and blood moons. “Be careful. Abandawe will devour ye,” she warns Claire. “Abandawe! Abandawe! Abandawe!” Claire is puzzled but seems to chalk it up to the woman’s condition. 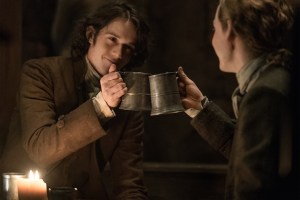 YOUNG IAN (ALMOST) GETS SOME | Meanwhile, Young Ian proves himself a capable salesman by unloading all of the contraband alcohol for a profit. This is cause for celebration for Young Ian and Fergus; buoyed by his success, Fergus’ encouragement and a few pints, Jenny and Ian’s son finally gets up the courage to talk to Brighid, a lovely bar lass who’s caught his eye.

Talking turns to drinking, which turns to Young Ian thinking he’s finally going to lose his virginity that evening. He and Brighid head back to the print shop, where he tries to bend her over the bed as he hastily lifts her skirts from behind. She’s more amused than anything else as she shuts him down, saying that she thought someone who worked “out of a kittle-hoosie” would know a little bit more about the subtleties of shagging. When he admits he needs her to lead the way, she’s more than happy to comply.

But their tryst is interrupted by Percival’s thug breaking into the shop in search of the illegal alcohol. Young Ian quickly sends Brighid to safetly, then confronts the trespasser. They come to blows, and when the thug throws Ian into a wall, he inadvertently discovers Jamie’s cache of treasonous printing projects. There’s more fighting, and at least one shot fired, and then a brazier goes over and the place catches on fire.

MMM, MINTY | When Claire returns to Madam Jeanne’s, she’s surprised to hear that Barton’s body has been hidden in a cask of Crème de Menthe — aka somewhere no whisky-swilling Scotsman is likely to ever find it. Just as Claire is proposing that maybe they should find their own, non-brothely place to live — and that maybe she could work as a healer to increase their household income — Old Ian shows up for a surprise visit.

Hard to say what’s more surprising to Claire: that her brother-in-law is suddenly standing there in front of her, or that Jamie is boldfaced lying to his best friend about Young Ian’s whereabouts. (Side note: I love how emotionally wrecked even Ian is about seeing Claire again. God, the Murrays are great.) After Ian leaves, Jamie refuses to feel bad about the untruth, despite the fact that the disapproving look Claire gives him would reduce lesser men to ash. And when she plays the “you have no idea what it’s like to be a worried parent” card, stuff gets verra nasty, verra fast.

Claire says that Jamie doesn’t get to make decisions like that, because he’s not Young Ian’s father. “No. I’m Brianna’s father,” he says angrily. “But I didn’t get to raise her, did I? I Didn’t get to have a say in how you and Frank brought her up, that wretched thing you call a bikini.”

She rolls her eyes. He starts insinuating that she loved Frank when she went back, even though she denies it. And before anything can get resolved, Madam Jeanne interrupts: There’s a fire in Carfax Close. 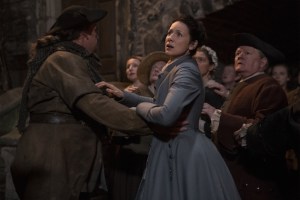 UNHAPPY WIFE, UNHAPPY LIFE | So the Frasers fly to the area and find the shop up in flames. Jamie realizes that his nephew might be inside, so he wraps Claire’s cloak around his face and does some Spider-Man moves to get inside, rescue the teen and get them both out safely before the fire becomes impassable. (Jamie also manages to grab the miniature of William, but everything else is destroyed.)

Once Ian has stopped coughing, he fills them in about the one-eyed thug, who escaped and who’s surely telling Percival that Jamie’s a traitor — a crime punishable by death. So Jamie gives Yi Tien Cho and Fergus their cut of the smuggling business and tells them to lay low, saying he and Claire will take Young Ian home to Lallybroch. Oh, and he asks Fergus to direct Ned Gowan to the homestead, as well, because he’ll have need of his services soon.

“Milady does not yet know about your other wife?” the Frenchman asks. Well, Jamie still has all his parts, so I’m gonna go with: nope.