Tuesday’s episode of The Voice left Season 13’s Knockouts in the rearview mirror and me feeling reflective — mainly about how easy it was to pick the standouts from this eh-OK crop of contestants. My once-high expectations for Anthony Alexander have been lowered. After Monday’s “Behind These Hazel Eyes,” I still think of Moriah Formica as rock but not rock-solid. Ashland Craft’s “Wanted Dead or Alive” should have left her singing “Take Me Home, Country Roads.” And as far as I can tell, Jon Mero simply cannot cut the cheese out of his performances. That leaves, IMHO, five real contenders: Chris Weaver, who, as you’ll read below, continued on Tuesday to be shoe-throwingly good; Chloe Kohanski, who shone just as the spotlight on Ashland was dimmed; Davon Fleming and Janice Freeman, both of whom are as much fun to watch as to listen to; and Emily Luther, who’s so stupendous, she’s been warned against being too perfect. (Is that even a thing?) But enough about me. Having made it through the Knockouts, who are you thinking has what it takes to win? Let’s review Tuesday’s singoffs, then you can weigh in in the comments.

Team Jennifer: Chris Weaver singing “I Put a Spell on You” (Grade: A-) defeated Katrina Rose singing “Zombie” (Grade: C) | Chris came out, tongue coated in velvet, and so beautifully set a midnight tone that I had to check the clock to make sure I wasn’t up past my bedtime. But he wasn’t just trying to get us drunk on his satiny vocals, he was intent on showing off, which he did (and how) on choruses so raw and unhinged, they made me think of the Marilyn Manson version of the song more than the Nina Simone one. When Katrina took her turn in the spotlight, she sang her lungs off but was vocally way out of control. (And that last big “zooombie” was a total disaster.) So obviously, the win had to go Chris.

Team Blake: Red Marlow singing “Outskirts of Heaven” (Grade: B) defeated Megan Rose singing “Smoke Break” (Grade: B-) | Going into this clash of the would-be country stars, the smart money was on Red. How could it not be? The guy described himself as being as country as a “wheelbarrow full of turnip greens.” Up first, Megan sang so quietly on the verse that the band almost drowned out her vocal. No one could have had any trouble hearing her on the chorus, and she acquitted herself nicely, but there was nothing about the performance that was going to make you remember it a week from now. (What’s that? You’ve already forgotten it?) When Red stepped up to the mic, he sounded shakier than I expected but also somehow more authentically country, which, lucky for him, was enough to get him a pass. At some point, though, he’s gonna have to be great and just not super-country, right? 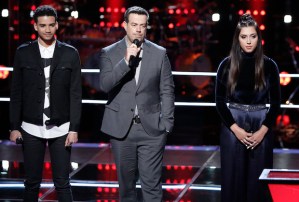 Team Adam: Anthony Alexander singing “Mercy” (Grade: C) defeated Hannah Mrozak singing “Love on the Brain” (Grade: A-) — Hannah stolen by Jennifer | Gutsy move on Hannah’s part, tackling that particular Rihanna hit after Chris Blue so completely owned it in Season 12. Smart move, too, it turned out. She might not have owned it as incredibly as Chris had, but she at least rented it, demonstrating formidable range and earning herself the steal. During Anthony’s Shawn Mendes cover, I was forced to rethink my championing of him. The kid can sing, no doubt. But he’s so unseasoned that he threw away the verse, fumbled big time in the middle of the song and, for most of his performance, demonstrated approximately the same stage presence as a nervous sophomore trying to win a trophy from his school’s talent show. Bums me out to say it, but he’s just not ready.

So, who do you think gave the night’s best performance? Vote in the poll below, then hit the comments with your pick to win the season.