Night 2 of The Voice’s Season 13 Knockouts — or, as I think of them, the Sit There and Hope Your Opponent Forgets the Lyrics Rounds — had on tap Moriah Formica bravely covering key adviser Kelly Clarkson, Emily Luther attempting to tickle us Pink and Brooke Simpson going for broke to earn our R-E-S-P-E-C-T. (Although, ironically, not by tackling that Aretha song.) Which of them fared the best? Read on…

Team Miley: Brooke Simpson singing “(You Make Me Feel Like) A Natural Woman” (Grade: A-) defeated Stephan Marcellus singing “Impossible” (Grade: C) | After Stephan redeemed himself in the Battles, I was kinda rooting for him. I didn’t think he could beat Brooke — she’s a force of nature. But I hoped he’d get a(nother) steal. Alas, it was not to be. On stage, Brooke built from a smooth starting point to big notes that were so powerful that at one point, I’m pretty sure she sang a lung out and had to inhale it back in again quick-like so she could keep going. When it was Stephan’s turn, he only hinted at his potential and, worse, faltered so badly during his showoffy notes that his elimination was a no-brainer. He was so off, I couldn’t even be as bummed as I expected to be that he didn’t get stolen.

Team Blake: Mitchell Lee singing “I’ll Be” (Grade: B) defeated Anna Catherine DeHart singing “Breathe” (Grade: C-) | Having been encouraged in rehearsal to go for even higher notes than he thought he could, Mitchell at times actually did soar on stage. At other times, however, he at best hovered, struggling, it seemed, with his phrasing and leaving an overall good, not great, impression. And there’s still something about him that’s so cheesy, it makes me think he oughta be spread on a Ritz cracker. During Anna Catherine’s moment in the spotlight, it appeared that nerves got the better of her. The first verse fell flat, and even her money notes felt so off that they should’ve been discounted. Not the kind of performance that was going to get her a ticket to the live shows. 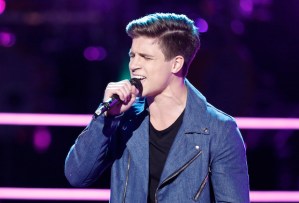 Team Jennifer: Noah Mac singing “Hold Back the River” (Grade: B) defeated Jeremiah Miller singing “Sorry” (Grade: D) | In rehearsal, Noah reduced Kelly to tears — which suggested that he’d soon be reducing Jeremiah to tears, too, albeit in a whole different way. Going first on stage, Jeremiah earned himself the prize for Worst Wannabe Teen Heartthrob Since Mark Isaiah. There was no amount of “sexy” squinting that he could do to make up for the fact that he was pitchier than the guy on the mound at a baseball game. Going second, Noah would have had to have sung as badly as I do to have lost. Instead, he sang pretty well. There was too much vibrato for my taste at the start, but when he dove down into his lower register, then rose up into his big notes, he was pretty impressive. And he sure as hell knew how to work his boy-band hair like he was a rock god.

Team Blake: Keisha Renee singing “I Hope You Dance” (Grade: B) defeated Kathrina Feigh singing “Girl on Fire” (Grade: B-) | Kathrina was sounding better in rehearsal on her Alicia Keys cover than I remembered her sounding during her Battle. But Keisha didn’t just sing, she erupted. On stage, Kathrina gave it all she had but oddly didn’t wow the way that she had when practicing. A little restraint in her case might do a lot of good. Up second, Keisha might have benefited from a little restraint as well. She’s a powerful enough vocalist that it wasn’t necessary or even advisable for her to sing the verses as loudly as if they were choruses (especially when trying to tell a sweet story in a song).

Team Miley: Moriah Formica singing “Behind These Hazel Eyes” (Grade: B-) defeated Whitney Fenimore singing “Calling All Angels” (Grade: B) | Based on the rehearsal footage, I was more feeling Whitney’s earthy Train cover than Moriah’s rendition of Kelly’s hit — for once, she was veering into screechy territory. When the moment of truth arrived, the rocker seemed unsure in her lower register during the verse and then launched into the chorus unsteadily. Before she was done, she’d reminded me here and there why I was a fan, but her vocal was overall out of control — and not in a good way. So the stage was set for an upset… which we did not get. Though technically, Whitney outsang Moriah — a coupla bum notes notwithstanding, her performance was as warm as a cup of chamomile tea (with honey) and just plain better — Miley stuck with the next-gen Avril Lavigne. 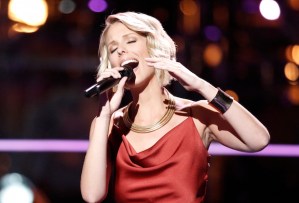 Team Adam: Emily Luther singing “Glitter in the Air” (Grade: A+) defeated Adam Pearce singing “Smoke On the Water” (Grade: B) — Adam stolen by Miley | Stepping up to the mic first, Adam gave a freewheeling performance that beautifully illustrated exactly what his coach had meant when he said a lotta people sing rock, but there aren’t a lot of rock singers. (Although did anyone else get the sense that he was missing his guitar and, in the back of his head, thinking, “Jeez, would anyobody notice if I just stuck this spare hand in my pocket or something?”) When it was Emily’s turn, holy moly, she covered Pink with a clarity, confidence and flat-out beauty that was not of this earth. Truly dazzling — so much so that it made me realize how often I make excuses for singers on this show who can’t deliver what this was: a totally flawless performance.

And, in a Knockout that we only saw part of, Jon Mero, singing — and, as you’d hope, dancing the hell out of — “Blame It on the Boogie,” got Dylan Gerard kicked off of Team Adam. So, who did you think gave the night’s best performance? Vote in the poll below, then hit the comments.