Had Monday’s start of The Voice’s Season 13 Knockouts been Kelly Clarkson’s Blind Audition to be a coach on the show, would you have turned your chair for her? The Grammy-winning American Idol champ certainly appeared to be into it. And her advice seemed on point. (For instance, she suggested that Shi’Ann Jones maybe shouldn’t spend an entire song doing runs, encouraged Janice Freeman not to just copy Mary J. Blige, and brought a hell of a howl out of Dennis Drummond.) But I dunno — she didn’t feel like an obvious slam-dunk the way that Kelly Rowland had during the Battles. (Why hasn’t she been signed up as a coach yet?) Before you weigh in on Clarkson’s key-adviser performance in the comments, let’s review the night’s match-ups, shall we?

Team Blake: Esera Tuaolo singing “Superstar” (Grade: B-) defeated Adam Cunningham singing “Either Way” (Grade: B+) — Adam stolen by Adam Levine | Singing first, Adam immediately established a tone of intimacy that was so striking, it made you feel like you were eavesdropping on a secret being told. So, when he built to the bigger notes, the contrast was stunning. When Esera took his turn, he reminded us that his voice is as mountainous as he is. And certainly, he wasn’t “bad.” But his performance was overall forgettable. Not only does he lack stage presence, but there are at least half a dozen singers in the competition whose soul stylings pack more punch. Adam Levine definitely got the better end of the steal.

Team Jennifer: Shi’Ann Jones singing “Who’s Lovin’ You” (Grade: B) defeated Lucas Holliday singing “Tell It Like It Is” (Grade: C) | Maybe Lucas’ power was in his mullet. Having stylishly trimmed it, he started off his performance wobbly — I mean, there’s vibrato, and then there’s just plain wobbly; he was the latter. Though he recovered, he only went on to come off alternately pancake-flat and flop-sweat-desperate. Sorry, Luke; back to the cash register. When Shi’Ann took her turn, the worst that could be said about her Jackson 5 cover was that she might have oversung it (and hadn’t needed to). Also, that little break that she puts in her voice… totally cool. But perhaps she doesn’t need to include it in every other note.

Team Adam: Addison Agen singing “Beneath Your Beautiful” (Grade: B+) defeated Dennis Drummond singing “All Along the Watchtower” (Grade: C+) | From the first line of Addison’s performance, I could tell that she would win the round. Not just because she sounded lovely — she did — but because if you played her for me, and 20 other vocalists, I could pick her voice out of the crowd. Is she my favorite? No. She’s too affected for my taste. And this was definitely not her most wow-some showing. But she is, at least for this competition, unique. As for Dennis, he nailed the howl that Kelly Clarkson had coaxed out of him in rehearsal but mostly reinforced the notion that he’s a better guitar player than singer. 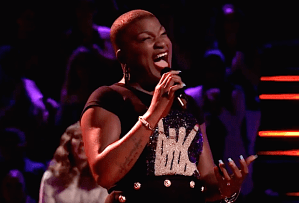 Team Miley: Janice Freeman singing “I’m Going Down” (Grade: A) defeated Karli Webster singing “Blue Bayou” (Grade: B+) | After hearing Miley’s teammates in rehearsals, I expected this Knockout to be a rout. That Mary J. Blige number fit Janice like a glove, and seemed destined to let her rattle the seats even in the back of the auditorium. Singing first, Karli sounded divine, like velvet curtains rustling in a breeze. (OK, except for that one painfully pitchy note in the middle.) But then Janice didn’t just take her turn, she freakin’ took possession of the stage, serving ferociously raw vocals and facial expressions to match. Karli didn’t crash and burn or anything of the sort. Yet this was still exactly the rout I feared it would be.

Team Jennifer: Davon Fleming singing “I Can Only Imagine” (Grade: A-) defeated Eric Lyn singing “What’s Going On” (Grade: C+) | Before this Knockout had even begun, I suspected we were looking at Janice vs. Karli, Part 2 — one humongous voice up against one… er, less giant one. To his credit, Eric made the most of his time on stage, establishing himself as a perfectly competent R&B singer… whose concert you’d be unlikely to buy a ticket to. Not because he can’t sing — he can, quite nicely. It’s just, he generates approximately zero excitement. Davon, on the other hand, gives off the vibe of a live wire — you can’t take your eyes off him. Here, he sang with a forcefulness that could have blown open the pearly gates. And that one long note — hello! We’ve got ourselves a contender!

Team Miley: Ashland Craft singing “Wanted Dead or Alive” (Grade: C) defeated Chloe Kohanski singing “Landslide” (Grade: B) — Chloe stolen by Blake | I love me some Ashland as much as I love me some grits (and, cheesy or not, I love me some grits). But WTH happened to her Monday? Though on stage she still sounded as country as a dirt road, that road went in circles; either, she’d altered the melody of the Bon Jovi classic so much that it sounded dodgy, or she was, as I feared, bungling notes right and left, resulting in her sounding dodgy. Either way, it left the path clear for Chloe to come in and, by comparison, shine with an intense, controlled cover of Fleetwood Mac.

So, what did you think of Kelly as key adviser? Who, in your opinion, gave a performance that really deserved to be called a Knockout? Vote in the polls below, then hit the comments.