Roseanne Barr and John Goodman are all smiles in one of the many photos to surface from the set of ABC’s forthcoming Roseanne revival. 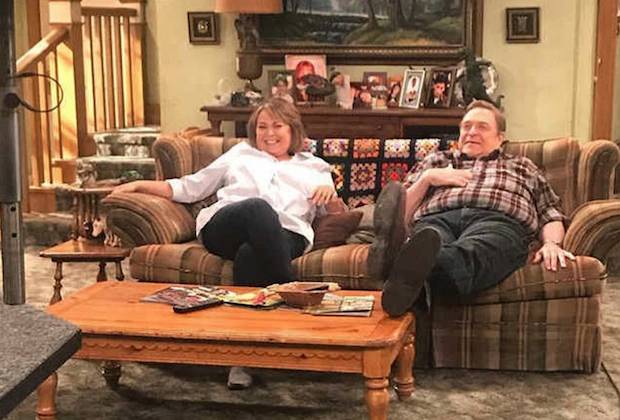 Over two dozen pictures have been snapped and posted to social media since production got underway in October. Among them, you’ll spy much of the original cast, including Barr (Roseanne), Goodman (Dan, very much alive), Laurie Metcalf (Jackie), Sara Gilbert (Darlene), Lecy Goranson (Becky No. 1), Michael Fishman (D.J.) and Sarah Chalke (Becky No. 2, now appearing in a new role), as well as Shameless‘ Emma Kenney (David and Darlene’s daughter Harris) and newcomers Ames McNamara (their son Mark) and Jayden Rey (D.J.’s daughter). Also present is executive producer Whitney Cummings, who is responsible for many of the photos you’ll find in the attached gallery.

There’s plenty to love about these pics outside of seeing the cast reunited. For instance, the Conner home has been restored to its pre-lottery aesthetic, with the living room, the kitchen and Becky and Darlene’s bedroom practically untouched. Dan’s wardrobe also appears to be as flannel-friendly as ever.

Roseanne‘s eight-episode revival is expected to premiere in early 2018. Scroll through the gallery above (or click here for direct access), then hit the comments and tell us if you’re excited to return to Lanford.