Just sit right back, and you’ll hear a tale, a tale of a fateful trip… Yep, Grey’s Anatomy set sail Thursday as Jackson took most of Grey Sloan’s menfolk “fishing” aboard his brand-spanking-new boat. Meanwhile, back at the hospital, Arizona, April and Maggie’s dull, dull workday got a whole lot more interesting when they treated a patient who… On second thought, keep reading. You’re gonna have to see it (in print) to believe it. 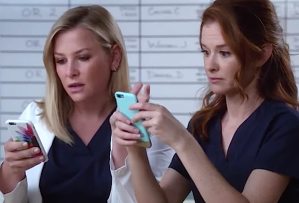 ‘SHE IS A ROCK STAR, HAVEN’T YOU HEARD?’ | As “Come on Down to My Boat, Baby” began, Owen wondered aloud whether he and Amelia had made a mistake splitting up. Alas, no, she replied. But “I want us to be friends” — the real kind. That said, they decided to blame everything bad that had transpired on the brain tumor and start over as pals. Pals who’d again be colleagues since Amelia was nervously returning to work. So nervously, in fact, that she wanted Koracick to lend a hand with her first surgery. Speaking of operations, Meredith’s on Megan had gotten Grey the cover of a medical journal. Her patient du jour was one Judge Jeffrey King, who was in for a liver resection and diversion procedure (whatever those are). Since it was overall a slow-ass day at Grey Sloan — perhaps the calm before the 300th-episode storm — Arizona and April killed time swiping left and right on Tinder. Robbins was single again, she explained, because she’d broken up with Carina “by accident” — when she told her new lover that she needed space in anticipation of Sofia’s return. “So now here I am,” Arizona sighed, “swiping instead of having sex with an Italian orgasm scientist!” After dating-app beginner Maggie joined the duo, Bailey seized her cell and did a little matchmaking for her — “I don’t get to swipe!” the married doc said, pleading to have a little fun — until at last a page alerted them to an actual medical situation in need of attention: a woman who’d been trying to smuggle a gun into prison via her vajayjay! Of course, it went off in the O.R. and hit Grey Sloan’s resident hypochondriac!

‘DR. GREY IS CREEPING ME OUT!’ | Since Meredith was being especially nice to Jo for Alex’s sake since she couldn’t be mentioned in the medical journal — damn you, Paul! — it freaked out Wilson, who complained to Richard that Grey was treating her like a baby deer. In turn, Webber revealed that Jo was up for chief resident, which only weirded her out more. Though Judge King was iffy about signing the consent form for Mer’s surgery, Jo encouraged him to be brave rather than live what life the cancer patient had left wondering “What if… ?” When Mer checked in on him afterwards, concerned that Jo had pressured him into signing, he recalled his late wife and gave off sweet sparks that made one think, “Hmm… is he the next Nathan?” Later, Mer reassured Jo that she didn’t see her as a victim. And it appeared that Wilson was ready to go on the offensive to boot. Once the judge was out of surgery, Jo, having heard that he worked with domestic-violence cases, asked him for some legal advice. Unfortunately, he reported that there was nothing she could do to keep Paul from confronting her face to face if she filed for divorce. 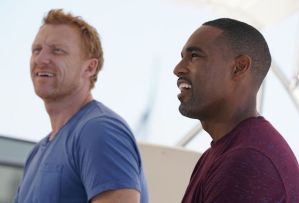 ‘WHO SAID ANYTHING ABOUT SLEEPING TOGETHER?’ | Off a random remark by Alex about how if he had as much money as Jackson did, he wouldn’t be at work, he’d be on a boat, Avery impulsively bought a boat and invited aboard Karev, Ben, Owen and DeLuca. When talk turned to sisters, with each of the guys complaining about the way that theirs drove them crazy (Ben, winning the contest: “I used to call my sister my brother”), Jackson said that he liked having a sibling. Cue the guys laughing and Ben clarifying, no, “Maggie is not your sister,” regardless of Richard and Catherine’s union. Didn’t Alex think of, say, Meredith as his sister? “No, she’s like family,” Karev said, prompting Jackson to reply, tellingly, “But you wouldn’t, like, sleep with her?” Cue more laughing, and like it or not, Jaggie is a thing. As the beer began to flow, DeLuca revealed that he needed a new place to live since Sofia was moving back to Seattle. Stay with me, said Owen (or at least so said his beer). Ben also blurted out that he was training to become a firefighter — and sshh, Miranda didn’t know.

‘WE ALL HAVE TO DO HARD THINGS’ | As Amelia continued to freak about her loss of her brain tumor, she admitted to Richard that she feared it had been what made her brave in surgery. No, “it’s just like sobriety,” he reassured. “You can take it one day at a time, one surgery at a time.” In the O.R., Shepherd’s patient started hemorrhaging, prompting Koracick to remark that maybe he’d cleared her to return to work too soon. (Did anyone not imagine that was a tactic to get her competitive spirit to kick in?) “I cannot believe I ever considered you a mentor,” she said. Still, his ploy worked; she got the tumor she was after. “You are still better than me,” Koracick admitted, “and that really pisses me off.” And, in that moment, you had to think, “Are they about to get it on, or what?” And holy crap, they were. They did. Nonetheless, “I dislike you so intensely,” she insisted.

‘I’M NEVER COMING TO THIS HOSPITAL AGAIN’ | Operating on the hypochondriac, Bailey said that he made everything harder than it had to be, prompting Maggie to ask if she did the same thing. Just then, her phone pinged, and she agreed to go out with whomever it was. As a matter of fact, she’d meet him in the lobby at the end of her day. (Mind you, when he showed up, she hid. Literally ducked behind a desk and hid.) At the interns mixer, Jackson & Co. showed up drunk as skunks. And, as the episode drew to a close, Judge King died. (So OK, not the next Nathan.) Just then, Richard ushered Mer downstairs to the mixer to announce that she’d been nominated for a Harper Avery Award. Her response: “I need a drink.” Pulling Bailey aside, Jackson told her that he had a quarter of a billion dollars and wanted to give her half of it to start, in essence, her own Harper Avery Award. “I just want in the game,” he said. No sooner had DeLuca told Arizona that he was moving in with Owen than they caught him making out with Carina! Next, he bumped into new intern Sam… who he seemed to know and know well. Finally, Jo told Alex that she was going to file for divorce from Paul.

So, what did you think of “Come on Down to My Boat, Baby?” Owen and Amelia’s hookups? Hit the comments.