Once Upon a Time creators Adam Horowitz and Eddy Kitsis break down the reveal of Rumple and Belle’s “happy ending,” and what the future might hold for them as a couple — even in the wake of Belle’s death.

TVLINE | You seem to have seen an opportunity here to not just “check in” on Rumple and Belle, but really do a deep dive into what was next for them. What spurred you to go “all in” and deliver such closure?
EDDY KITSIS | We had the idea last year. Because they fought so hard for six seasons — will they? won’t they? — as fans of Rumbelle we wanted to see their life. Rumple is immortal and we always loved the idea that Belle was the one who said, “I don’t want to not age, I don’t want to use magic. What makes life special is the fact that you only have one.” So you see the man who always chose power over love willing to get rid of his dagger, and because of that we see that they truly had true love and that he really had evolved. We really wanted to tell the story of, “What happens to the guy who has been around for 300 years and now realizes that love was the most important thing in his life and he’s ready to move on, but he’s cursed by this dagger?” 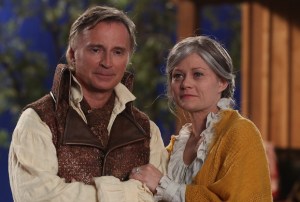 ADAM HOROWITZ | There was this storytelling conundrum in that after six-plus years, we had told many different stories and put them through many different paces, so the question was, “How do you give them happiness and yet maintain drama in their story?” This became a really emotional solution to that. These two deserve happiness, the ultimate “happy ending” in life, so let’s give it to them and then give Rumple a really difficult direction to go in, where he has this grounded drive to get back to her.
KITSIS | He wants to get back to her and we know he has to preserve his heart and we know he has to stay in the lightness instead of using dark magic, but the person who always was his North Star is gone. That idea of Weaver in Seattle without his guiding light, what happens?

TVLINE | But in your mind what does “get back to her” mean? What does Belle promising, “You’ll find your way back to me again” mean?
KITSIS | As we saw in the Underworld, in these fairy tales there is a life after death. So for us that is what he’s trying to do, he’s trying to find a way to remove the power, to remove the dagger, and to move on with Belle.
HOROWITZ | Their souls should be together, and that’s what he believes. 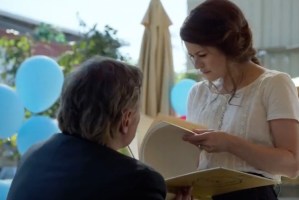 TVLINE | Was evoking Up always part of your game plan for Rumbelle’s happy ending, or did it come into your heads when actually breaking this episode?
KITSIS |  We’ve kind of had this idea since we knew the [Season 7] “requel” was going to happen. The two inspirations for this story were Benjamin Button and Up, because we love the idea of Rumple starting to deal with the fact that he’s immortal. He first became immortal to find his son and the power of the Dark One, but here was a case where we see it starting to hurt him. We love the idea of Belle teaching the lesson that one great life is all we get, and that’s what makes it special. That’s what brings him to this final lesson, of realizing that power and immortality doesn’t mean anything unless you have someone that you care about and love, and you have a life worth living.

TVLINE | But you couldn’t find a way to incorporate a dog who talks through his collar?
KITSIS |  We couldn’t afford it.