The following contains spoilers from this Friday’s Once Upon a  Time.

ABC’s Once Upon a Time this Friday night not only checked in on the status of Rumplestiltskin and Belle’s happy beginning back in Storybrooke, it proceeded to chronicle the couple’s epic journey from there — leading right up to their very happy (if bittersweet) ending.

As they readied to celebrate son Gideon’s first birthday, Rumple gifted his wife with a scrapbook, which he said they will fill with mementos from her overdue travels. As they dug into that adventure, Rumple sought to cede the Dark One’s dagger once and for all, but it refused to be rid of him. Belle later translated a fairy prophecy which said that once the Dark One has found true love and arrived at the site of “the sun’s brightest set,” a path to his freedom would present itself. 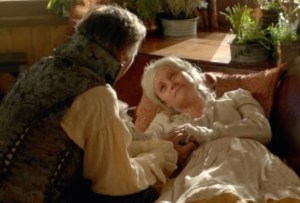 Once Rumple and Belle found that mountaintop location, they decided to spend the years-long sunset making a home for themselves. And in the end, we and Rumple realized that what Belle purposely omitted from her translation is that it was her own “sunset,” her dying of old age, that would mark the start of Rumple’s next journey. Cue a tear-jerking montage, narrated by Belle, of the couple’s roller coaster-like romance, one throughout which they made her way back to each other “more than once” — and now, Belle with her last breaths trusts, “you’ll find your way back to me again.”

Former series regular Emilie de Ravin, who plays Belle, effused about her encore episode in this TVLine feature, but she also gives “a huge shout out to Mick Garris, who directed it. Lovely, lovely man, and he did such a beautiful job.”

Robert Carlyle meanwhile shared a statement in which he said, “Throughout the years, [Once creators] Adam [Horowitz] and Eddy [Kitsis] have provided me with some truly outstanding scripts and ‘Beauty’ is most definitely up there with the best of them. The emotional range this script demanded was exceptional and to have had the opportunity to work alongside director Mick Garris on this piece was a real pleasure.

“Through six seasons I’ve been blessed to have had the chance to work alongside the brilliant Emilie de Ravin,” Carlyle continued, “and being reunited with Emilie once more on this beautiful episode was such a joy. The entire ‘Rumbelle’ journey has been one of the most intense in my entire career and sharing that journey with Emilie has been an absolute delight.”

Reflecting on Belle’s death scene, de Ravin flagged the “more than once” nod to the couple’s travails, saying, “I love that she still has cute quirky sense of humor right up until the end. Her sarcasm never dies.” 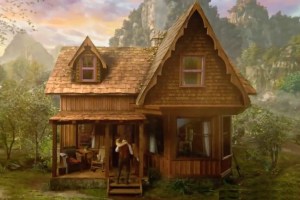 Because Disney-PIXAR’s Up, which in part influenced the episode, is “one of my favorite movies,” de Ravin says, “I was kind of dying reading that script and then watching it with the music.” And while she raved about the cliffside home Rumbelle built (“Put that in Big Bear for me and I’m there!”), she had to question the division of labor as she and Carlyle did their scenes for the whimsical montage. 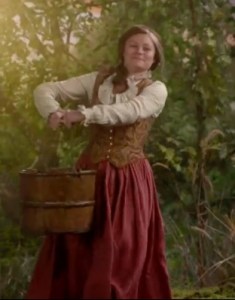 “I’m carrying this really heavy wooden bucket, which they filled up with probably four gallons of water. I’m carrying it and it looked real, it looked heavy. My arms were kind of sore after doing it a few times, but anyway… Bobby’s putting fake rocks in a wheelbarrow!” she shares with a hearty laugh. “Why do I get the heavy-ass bucket filled to the brim — you can’t even bloody see on-camera, how much water is in it! — and he’s loading little polystyrene rocks!”

Asked if she hopes to age as well as Belle, de Ravin (who says the dark gray wig was her favorite of the bunch) remarked of her various stages of graying, “I kept thinking, ‘So is this how it’s going to look [when I’m older]?’ It’s going to be interesting to have these pictures when I’m that age.”

Yet no amount of levity can take away from the fact that Belle passed away, leaving Rumple to seek out a dagger-less destiny — a journey that will eventually, years later, deposit him back in our realm, where he has just been awakened from his cursed persona as Seattle police detective Weaver. TVLine invited de Ravin to offer a message to those who have been there throughout Belle’s six-season saga.

“This show wouldn’t exist without our amazing fan base,” she started. “It’s such a beautiful, cool, exciting thing to be able to connect with them — whetehr it’s through social media or doing conventions. To hear people’s stories of ‘I met my best friend…,’ ‘I met my boyfriend…,’ ‘My children and I watch the show…,’ ‘It helped me through this….’ There are so many beautiful things that we are blessed to be able to hear about. To make people feel, to let people escape for an hour… or if they need a release to cry or laugh, or just a moment to sit down with their family and enjoy watching something… is special and so lovely. I love you, guys!”

Click to Page 2 (here) for the inside story on crafting Rumbelle’s happy ending — and how they might find reunite. But first, grade the episode below!