Although a great deal of the action in Thursday’s Grey’s Anatomy took place in Iraq a decade ago, what transpired in the present in “Danger Zone” looked like it would have a profound impact on life in Seattle going forward. How so? Read on. We’ll go over the episode’s big twists, then talk with Abigail Spencer about how Megan’s happily ever after might have just paved the way for Owen to get one, too.

IN THE PRESENT | The hour began with Megan preparing to road-trip it to Malibu, where Nathan and Farouk were busily setting up the insta-family’s new home. (Clearly, Riggs’ grand gesture in “Ain’t That a Kick in the Head” had done the trick.) After Nathan got a sense of how big an adjustment this was all going to be for Megan’s son — he’d have to get used to everything from not sleeping in Mom’s bed to going to school to food trucks offering mile-long menus — the doc used his own currently-unemployed status to reassure him that they could both find a way to get by without immediately knowing all the answers.

Meanwhile, Owen, perhaps to escape the awkwardness of his reunion with Amelia, decided to tag along on Megan’s drive. And at first, it was all jolly fun. But when, mile after mile, he tried to talk her out of leaving Seattle, it became clear that they were headed for a fight as much as California. Turned out, Owen had a habit of second-guessing his sister, and Megan was still steamed that she’d gotten kidnapped before they’d had a chance to argue about his not backing up her attempt to become a flight surgeon 10 years earlier. (At least he ultimately admitted that he’d been wrong and apologized.)

During the sibs’ roadside showdown, Owen suggested that she was making a mistake, settling down with someone who’d cheated, prompting her to remind him that hello, he’d cheated on Cristina. And besides, Megan had cheated on Nathan first. (Say what?!?) As the sibs’ hot heads cooled, Megan explained that, during her worst days in captivity, she’d flashed back to a beach vacation the Hunts had once taken and sworn, if she was ever free, she’d move somewhere that she could feel the ocean on her toes every day. “My beach plan makes me happy,” she said, adding that for Owen to be happy, he might have to break up with some of the unworkable ideas to which he’s so loyal.

As the episode drew to a close and Megan reunited with Nathan — just after he’d been texting with Meredith — Owen showed up back at his and Amelia’s house, the look on his face telling his wife all that she needed to know: It was over. “It feels like we don’t know each other,” he admitted. “I just want us to be happy.” So they took off their wedding bands and embraced, maybe marking the end of a disastrous marriage and the beginning of a great friendship? Maybe they can even be as happy — separately — as Megan looked playing on the beach with Nathan and Farouk? 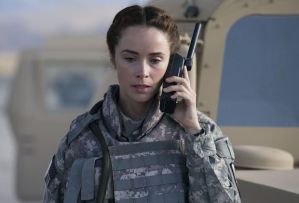 IN THE PAST | In the Middle East 10 years ago, Megan discovered among Nathan’s things an emerald necklace — which he used to propose to her… even though, we soon learned from a disapproving Teddy, the necklace belonged to another woman; it was even engraved! Before that bombshell could be dropped on an unsuspecting Megan, she learned that her future would not include becoming a flight surgeon — because Owen hadn’t recommended her! (Ouch. Just ouch.)

Later, “Nate” asked Megan for the engagement necklace back, which led her to mistakenly believe that he’d learned about her straying, so she confessed. (Man, these two were a mess, huh?) In spite of her own betrayal, she was shocked and hurt to hear that her fiancé of about a hot minute had cheated. Moreover, “you proposed to me with some other chick’s necklace?!?” she asked, incredulous. Upon informing Owen of this development, he gave the OK for Megan to break protocol and fly out on a medical chopper with her freaked-out patient. And we all know how that turned out! Now then, here’s Spencer with her take on her Grey’s stint and the wise words that may have changed Owen’s life.

TVLINE | Part of you has to be hoping that Megan will get tired of the beach and want to go back to Seattle, right?
Or we just make a spinoff that takes place at the beach! The beach is a lot nicer than Seattle — she makes a great point there.

TVLINE | All kidding aside…
This is one of the funnest jobs I’ve ever had and also one of the most surprising, just because I really was just trying to step into the shoes of Bridget Regan, who originated the part and [couldn’t pick it back up due to scheduling conflicts]. I’ve been the victim of a scheduling thing as well, so I have a lot of empathy. And I had no idea this was going to come along. Who knew that I was going to literally have the perfect window between seasons of Timeless to do this and that NBC would be so generous as to let me? This doesn’t really happen. Obviously, you always hope for more, but I’m super grateful for these five episodes and really proud of [“Danger Zone”]. 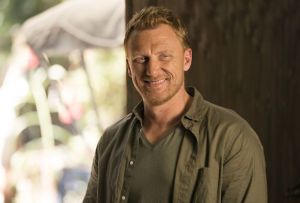 TVLINE | Speaking of which, what’s your take — was the advice Megan gave Owen specifically about his marriage, or was that just how he took it?
I think it’s pretty specific. Megan was planting a seed that, even if it’s not about Amelia, it’s something you actually have to look at. This is a real pattern for him. He’s holding onto something, and is he willing to let it go? I think she says it in a really beautiful way, because she’s talking about herself, too. She had to let go of a lot of stuff to get where she is. It’s that thing where you tell someone else something about yourself, and then it’s like, “I hope you do something with this” — as only a good sister can. [Laughs]

TVLINE | Pretty clever, in a way, letting him think it’s his own idea.
Nobody likes to be told what to do, and it’s not up to anyone else. People are going to do what they’re going to do. I love that scene, where she just sort of lays it out: “This is what makes me happy. That stuff that you hold on to? That’s not real. Let’s deal with reality.” Megan has gotten to a place where reality is so beautiful. When you go through something so traumatic, you come back with so much more perspective. “Life is short! Life is really short! Do you wanna keep doing that? Enough!”

So, what did you think of “Danger Zone”? Were you surprised to learn that it was Martin Henderson’s final episode as Nathan? Were you sorry to see Owen and Amelia call it quits? Hit the comments.