We need to talk about Kevin.

This Is Us‘ Kate hit rock bottom regarding her weight in the series premiere. Brother Randall followed her with an emotional breakdown in Episode 15. And now, given the way that Kevin drinks, drugs and growls his way through this week’s hour, the clock is ticking on how long it’ll be before the last Pearson kid is at the deep end of his very own personal nadir. (And no, the Manny tirade doesn’t count.)

Oh, and did you know Jack had a brother? Neither did we.

Read on for the highlights of “Brothers.” 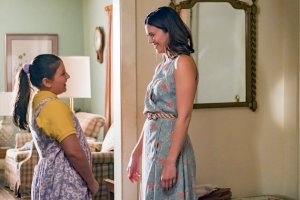 THE HATE OUTDOORS | In a flashback, Jack takes the always-feuding Randall and Kevin on a camping trip (we’re at the point where the kids are 10-ish) while Kate stays behind for a girls’ weekend with Rebecca. But while Jack’s trying to force a little brotherly love between his sons, Rebecca gets a phone call that interrupts her plans for mani-pedis and movies: Jack’s father, Stanley, is dying.

When Rebecca finally reaches her husband, he has no desire to cut the trip short or to see his father at all, actually. “That man’s been dead to me for a long time,” he says. And when he tells Rebecca that the boys are taking “baby steps” toward being kind to each other, she marvels at how he’s managed to surmount his childhood. “Coming from your dad and being the dad you are? You are friggin’ miracle,” she says, making Jack’s eyes well up.

So all Stanley gets is a brief glimpse at Kate (“Is that my granddaughter?” he wheezes from the bed where he’s terminally sick with cirrhosis) and Rebecca’s calm but firm news that Jack isn’t coming, but he’s a fantastic father — despite his upbringing. At least Stanley has the good sense to look teary and ashamed at this news.

Kevin eventually realizes that Randall is just trying to be his bud. By the way, that notebook of Randall’s, with notes on how to change his behavior in order to get Kev to like him, is heartbreaking. And then the night that Jack and the boys return, Papa Pearson can’t sleep, so he goes to look at some old photos from his time in Vietnam. And, as we learn in a terribly sad flashback to Jack’s childhood that’s intercut with his sorting through the photos, Jack has a younger brother named Nicky, and Nicky also served in the war with him. 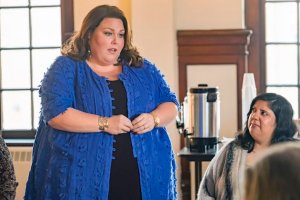 WHAT A FEELING | In the present, Kate goes to Toby’s work to tell him they’ve got an eight-week lentil kiddo on the way. He’s overjoyed (“Well, that is the greatest thing I have ever heard in my whole life!”) but then very confused as she forbids him to talk about the baby with her or anyone until the child is outside of her body. She’s so freaked about her geriatric pregnancy (yep, that’s really what it’s called if you’re over 35), her weight and her overall experience with bad things happening that she doesn’t want to get her hopes up. He’s stymied, but he agrees.

But things change after a heated exchange at Kate’s weight group. Madison — the skinny girl — tells a ridiculous story about how she vaped once and is now hooked on smoking, and Kate publicly calls her out on being silly and vapid, and possibly only being at the meeting to feel better about herself among those who are worse off. “Do you know why no one’s defending you?” Kate cries, eyes narrowed. “Because you don’t have a problem!”

The argument continues in the parking lot, where the women exchange “Screw you!”s, and it quickly becomes clear that Madison may not be overweight, but she’s very jealous of Kate’s happiness with Toby. Kate angrily gets in her car and throws it into reverse — and that’s when she hits Madison, who’s done the same with her car. The blonde is irate when she gets out, but she pauses when she sees that Kate is shaken and crying. Then Kate blurts out that she’s pregnant, and she just got worried for a minute, and all of a sudden Madison is squealing and congratulating Kate as she hugs her. (Side note: Props to Caitlin Thompson in this scene, because I buy both Madison’s pissed-off whining and her heartfelt happiness at Kate’s news. And the abrupt change of heart is funny, to boot.)

Afterward, Kate realizes that sharing her news with Madison gave her joy, so she allows Toby to tell one stranger in a random café about the baby. So he, in true Toby fashion, gets the barista to play his happy song — Hootie & the Blowfish’s “I Only Wanna Be With You” — over the loudspeakers as he dances all over the coffee shop, telling everyone in earshot that he’s going to be a dad. He finishes by tossing an urn full of water over his head, Flashdance-style, and it’s nice to see Toby maturing, isn’t it 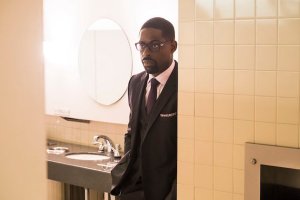 BABY STEPS | Kevin’s back on the East Coast. He winds up at Randall’s, where Deja reveals herself as a bit of a Manny fan, and then he invites everyone to the charity gala for Sophie’s hospital that evening. Kev is volunteering to be auctioned off for a date, which he assumes makes Randall jealous. “No black man will ever be jealous of being auctioned. #AmericanHistory,” his brother shoots back. Beth doesn’t seem to be all that sad to be missing another “Kevent” (ha!), but Deja really wants to go. And because it’s the first thing that the teen has shown any interest in since she arrived at the house, Randall leaps to volunteer to escort her to the bash.

In typical Randall fashion, he is a giant dork the entire evening (and if Sterling K. Brown hadn’t already gotten an Emmy for this show, I’d nominate him for one based solely on his reading of “You see that Michael’s over there? Used to be a Kohl’s”). But Deja largely ignores him, reacting only when she sees Kevin (with happiness) and when Randall unthinkingly grabs her hand to stop her from eating a shrimp tail (with panic).

She holes up in the women’s bathroom for most of the rest of the event; when Randall eventually works up the nerve to go in and check on her, she opens up a little and tells him that the boyfriend of her second-to-last foster mother used to hit her hard with magazines “because they didn’t bruise much,” and “that’s why I don’t like being grabbed.” Then she unlocks the stall door and walks out, leaving Randall to follow her as he tries not to cry.

THE GALA GOES BAD | Let’s rewind a little to the afternoon of the gala, where Sophie notices that Kevin’s starting to drink pretty early in the day. What she doesn’t know: His knee is still bugging him, and he’s run out of the Vicodin his physician prescribed. Later, when we see them both at the party, Kevin is sweating profusely and continuing to drink as he leaves more messages for the California doc.

In fact, Kevin is wandering around and yelling via phone at the doctor, who’s refusing to refill his prescription, when he’s supposed to be on stage. He misses the auction completely, and Sophie is very embarrassed and angry when he finally saunters back into the ballroom, drunk. He lies about having to field a call from Ron Howard, mumbles something vague about being “exhausted,” then says he’ll see her later at her place. And as Kevin walks and sweats and cries a little on the Manhattan streets, he calls an old doctor and asks for pain meds. Achingly sad man who needs a lot of therapy say whaaaat?