In Thursday’s Grey’s Anatomy, Nathan, taking Meredith’s suggestion that he make a “grand gesture” to prove his love to Megan, reunited her with son Farouk; Jackson inherited a quarter of a billion dollars from his grandfather and inched closer to a romance with Maggie — till Catherine referred to her as his sister; Arizona had no sooner gotten finished reassuring April that she’d get used to nights away from Harriet than she got a text saying that Sofia wanted to move back to Seattle; Jo asked that Mer exclude her name from an article on Megan’s operation, lest an accompanying photo tip off Paul to her whereabouts; Ben kept Bailey in the dark about what we all know is his firefighter training; and Richard and the chief interviewed a slew of potential interns, among them Levi, cocky Vik, Iraq vet Casey, Stephanie fan Sam and sweet Dahlia.

But, of course, the “A” story in “Ain’t That a Kick in the Head” was the surgery that removed from Amelia’s head the brain tumor that had been causing so much of her erratic behavior. Not only was the operation a success and her recovery, speedy — albeit also painful (she momentarily forgot that Derek was dead) and weird (at one point, she only spoke French) — but at the end of the hour, the patient went home with her long-estranged husband, Owen. Here, Caterina Scorsone, who plays Amelia, reflects on the game-changer and its potential for giving the embattled couple a second chance.

TVLINE | Did it resonate with you, DeLuca’s suggestion that the thing Amelia was “missing” after surgery was the sense of dread that she seemed to carry around?
Absolutely. Since she was a small child, the initial trauma of witnessing her father murdered in front of her really kind of laid in a lot of her neuro pathways as far as how she thought the world was going to treat her. She thought disaster was waiting for her around every corner. And as it happened, there were a lot of disasters waiting for her. Who knows, if she’d had a different perspective, would her life have followed different lines? But she’s been in this constant sort of low-level expectation of devastation and despair sneaking up on her. I think it’s essential to her. [Her father’s murder] happened so early [that it programmed in her head,] “You’re in danger. The people you love are in danger!” So for that feedback loop to suddenly stop — potentially because of the tumor, she’s still sorting through that — that would be a huge shake-up in how she could potentially move forward in her life.

TVLINE | Already, we’re seeing some changes. Even as Amelia tried to set Owen free toward the end of the episode, the anger that she’d so often directed at him seemed to be gone.
I think so much anger and blame is a reaction to fear, and in really facing her mortality in such a direct and stark way, Amelia has had a chance to cross over a threshold of fear that all of us ignore. This fear of one’s mortality is so central to all of the other little fears, and she has had this really incredible opportunity to step over that threshold and get to the other side. There’s a major reduction in her fear of anything after that. That’s going to make her a less blame-y, less angry person, tumor or not, after that. She’s definitely seeing things in a new light. And again, we’ll never know, was it because of the tumor coming out? Was it just the experience of going through this and coming out the other side? She’ll never know. We’ll never know. But she’s changed forever.

TVLINE | Will this new, fearless Amelia be less adamant about the issue of kids that made such a disaster of her marriage to Owen?
We’ll have to see. That’s so far ahead of where we’re at right now. I have certain feelings about it, but that doesn’t mean that I can pull the whole writing staff with me! [Laughs] Right now we’re still in the trenches of getting Amelia back on her feet and into scrubs. This has been a major life event, so she’s still picking up the pieces and dusting herself off. 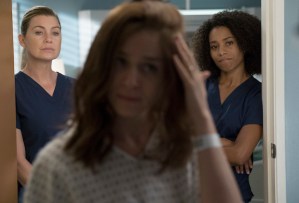 TVLINE | When the dust settles, might Meredith view Amelia a little more sympathetically?
I hope so. As silly and sarcastic as Amelia can be, she loves Meredith and loved Derek with everything she has. And Meredith [and the kids are] that Derek connection. Amelia wants to be family with her, so my heart kind of bleeds for Amelia every time she gets rejected by Meredith, because I know that, as much as Meredith might find her off-putting, there’s a real vulnerable earnestness with which Amelia wants to be in a sister relationship with Meredith. She moved all the way from L.A. to help her take care of her kids, and she stayed [after Derek died]… She loves Meredith and wants Meredith to love her. So I hope this leads to kind of a softening for both of them.

TVLINE | Lastly, did you really cut your hair for the opening scene?
No, I did not. We have fantastic special-effects people, and they created like a rubber cap that my hair was in, then a hand-punched half-hairpiece. So half of the hair was mine, and half of the hair was this piece that an artist painstakingly punched every single hair through so that it would be natural enough that when I used the razor on it, I was actually shaving hair, strand by strand, off of basically a latex scalp. They did a great job!

So, what did you think of “Ain’t That a Kick in the Head”? The prognosis for a tumor-free Amelia and Owen? Nathan’s “grand gesture”? The new interns? Hit the comments.