Well, that was a nice little surprise at the end of the episode, wasn’t it, Outlanders?

This week’s episode is a Claire-tastic affair that takes place almost entirely in 1960s Boston, as Dr. Randall grows accustomed to the idea that she’s going to travel back in time again and (hopefully) reunite with her long-lost love. So there’s a lot of hand-wringing, emotion-processing and raincoat-mangling before Claire gets her Joe Abernathy-approved rear in gear, and good lord I start to think I’ve fallen through the stones because WHY IS THIS EPISODE TAKING TWO HUNDRED YEARS TO FINISH. But then, suddenly, the world is verra bonny indeed.

The proof? Claire does go back to 18th-century Scotland, where she winds up at the door of Alexander Malcolm’s long-heralded print shop by the hour’s final moments. And then, because Ron Moore loves us, she walks right through — no teasing fade to black here — and we get the first few minutes of the reunion scene we’ve been waiting for.

But there’s a whole lot of Claire stuff before Jamie needs smelling salts, so let’s quickly recap the highlights of “Freedom & Whisky.”

BACK TO REALITY | Via a few brief scenes, we get an update on the Randall women’s lives in late 1960s Boston. Claire is a kickass surgeon. One night, she confesses to Joe that while abroad she had been toying with the idea of getting back together with an old flame. “I had hoped that we would be able to find each other again, but fate had other ideas,” she says sadly. “F—k fate,” Joe replies. (Ha.)

Meanwhile, Brianna, thrown by everything she learned while in Scotland for the Rev. Wakefield’s funeral, is failing out of Harvard. And it’s Christmastime, which makes Bree miss Frank all the more. With both mother and daughter emotionally adrift, it’s no wonder that they wind up having a huge argument about Bree’s decision to withdraw from college and move out. Too bad that’s the exact moment Roger decides to show up at the house, unannounced.

“Clearly I’ve come at a bad time,” he says, looking sheepishly from Claire to Bree as they try to pretend that they weren’t just screaming at each other. But it doesn’t take long before they’re back at it, “I need a break! You expect me to just come back to Boston and be who I was? I tried, and it’s not working,” Bree says, abruptly leaving and telling Roger she’ll see him the next day.

GOT ‘IM! | After Bree’s hasty, huffy exit, Claire urges Roger to stay. They bond a little over how it’s their first Christmas without a loved one — Frank for her, the reverend for him — but then he gets down to the real reason he’s traveled all the way from Scotland with no notice: “I found him.”

Roger produces a copy of an article written in 1765. The subject is restrictions on the import of spirits to Scottish highlands. But what is most intriguing is that the anonymous author quotes the “freedom and whisky gang thegither” part of Robert Burns’ poem “The Author’s Earnest Cry and Prayer” (the one that the performer was reciting at the bar in the previous episode)… even though “Burns was only 6 years old in 1765,” Roger points out. What’s more, the Edinburgh-based printer of the journal is Alexander Malcolm — “Jamie’s middle names, no?” Roger asks.

Young Rog doesn’t exactly get the reaction he’s expecting. “I never asked you to do this!” Claire says, angry as she cries. “I could’ve lived the rest of my life not knowing.” But now she does, and as she begins the earliest stages of seriously considering returning to Jamie, she instructs Roger not to say anything to Bree about finding her father, because “it will only confuse matters.”

RETURN OF LA DAME BLANCHE | Later, Claire enters her office at the hospital to find Joe examining a very old skeleton. With just a touch, Claire somehow infers that it’s a 150-ish-year-old murder victim, and Joe looks at her very oddly as he remarks that she’s “only off by about 50 years.” He adds that the female in question is white, is “from a cave in the Caribbean” and that someone tried to take her head off with a dull blade. He wonders how Claire could’ve had any inkling about the woman. “She just felt like it,” Claire says, seemingly not understanding herself. BUT WE DO, right, fellow book readers? (And if you haven’t read the novels, dinna fash: All will be revealed soon.) 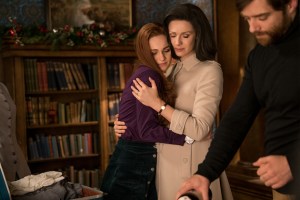 A MIND MADE UP | The Randall ladies eventually make up after a ceremony at Harvard in honor of Frank. Bree wonders who the blonde woman is talking to/glaring at her mother at the reception, and Claire confesses that Frank “loved her. It went on for many years, and he was planning on marrying her.” There’s some sweet back and forth about Bree feeling guilty for keeping her mother from Jamie for such a long time, and Claire absolving her daughter of any responsibility, because “I love you for you, Brianna, not for the man who fathered you.” Then Claire finally tells Bree about what Roger found. (Side note: Here and later in the pre-departure scene, Caitriona Balfe and Sophie Skelton do some very nice work.)

“It’s possible we may never see each other again. Can you live with that? Because I don’t know if I can,” Claire explains to Bree at home, but you can practically hear her mentally humming “Sing me a song of a lass that is goooooone” in her mind: Guys, she’s totally going back.

Bree repeatedly reassures her mom that she’ll be fine. “But I’m the one who knows you better than anyone,” Claire whispers, about to cry. Then her worries turn to Jamie (“What if he’s forgotten me? What if he doesn’t love me anymore?”). But Bree is supportive and loving, reasoning, “You gave Jamie up for me, now I have to give him back to you.”

GOODBYE FOREVER | So Claire gets down to the business of preparing for her big trip. Make sure she’s still sexually desirable? Check!, courtesy of Joe, who reassures her, “You’re a skinny white broad with too much hair but a great ass.” Celebrate Christmas with Roger and Bree? Check!, and they gift her with items useful for her upcoming endeavor: old coins, a slim book of Scottish history, and a topaz pendant on a chain. Make a functional-yet-stylish period costume partially out of raincoats? Check! Dye away the gray in her hair? Check! Put the deed to the house in Bree’s name? Check! Make sure all the messy goodbyes take place in Boston and not abroad? Check!

“I can’t believe you’re not letting me come with you to Scotland,” Bree says, hugging her mother. Be grateful, kid — in the book, you got a letter and a midnight ghosting! Claire gifts Jamie’s mother’s pearls to Bree, then hugs her tight. And before you know it, Claire is waving goodbye to Roger and Bree (who has an understandably emotional meltdown after Claire’s out of eyesight) and stepping into a cab.

Alone, Bree gives Roger the American Christmas dinner he’d earlier said he wanted to try — a lobster roll and Boston cream pie — then they snuggle on the couch as he reads aloud from his gift to her: A Christmas Carol. 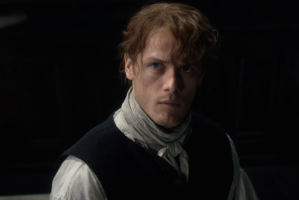 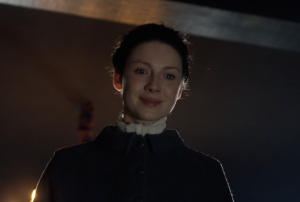 YEARS IN THE MAKING | The next time we see Claire, time and distance have passed, and Claire is back in ye olde Edinburgh, stepping out of a coach. A young boy gives her directions to Carfax Close, where the print shop is, and she tears up when she sees the sign bearing Jamie’s alias.

You think the hour is going to end as she enters the building, but as the bell (aw, the bell!) rings, a voice from the next room calls, “Is that you, Geordie?” It’s Jamie, and his back is to the door as he lightly chides whoever this Geordie person is for taking so long with his chore. “It isn’t Geordie. It’s me, Claire,” she says from the balcony overlooking the press. Below, Jamie freezes, then slowly turns around. It seriously takes him longer than #Droughtlander to do it, but I’ll cut the guy a break. His brow is furrowed. He looks at her, cry-smiling down at him, in sheer disbelief. And then an overcome James Alexander Malcolm MacKenzie Fraser faints.

He falls rather gracefully for such a large man.

Now it’s your turn! What did you think of the episode? Are you dying to see the next episode? Hit the comments and let us know!