Ladies and gentlemen, Dr. Claire Randall has left the country.

In this week’s episode, Outlander‘s protagonist sadly decides that she can’t spend any more time searching historical records for one James Alexander Malcolm MacKenzie Fraser, then packs up her regret, her massive cloud of ’60s hair and her daughter and hightails it back to America. (I’ll go into more detail later, but seriously, that more than sums up up Claire’s portion of the hour.)

Meanwhile, Jamie’s half of the episode spans eight years and includes accidental pregnancy, a fatal shooting, blackmail and a line — uttered by a nearly naked Mr. Fraser — that was so meta, it made me laugh out loud.

Read on for the highlights of “Of Lost Things.”

SCOTLAND SADNESS | Let’s do Claire first, aye? The hour opens in 1968 Scotland, and we’re back to the just-past-Rev.-Wakefield’s-funeral era of the Season 2 finale. Having theorized that time passes at the same speed in the past as it does in the present, Roger, Brianna and Claire are devoting all their time to trying to find Jamie in the historical record, to better ascertain whether he’s alive 20 years after Culloden — aka 1766. The trio is having a tough time until Claire spots her husband’s name on a list of Ardsmuir prisoners. So they theorize that he’ll likely show up on a ship’s manifest somewhere — because so many of the prisoners were shipped to other parts — and make a plan to tackle the national archives. 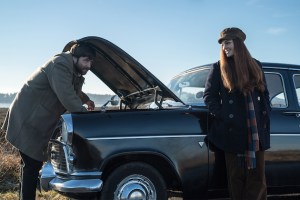 In the interim, Bree teases Roger that Mrs. Graham’s granddaughter, Fiona, who’s been keeping house for him since her grandmother died, is sweet on him. But he awkwardly sputters that she’s not his girlfriend, and a pleased Bree flirts with him a little. Later, Bree and Rog sit in front of the fire and she voices her worries about her mom finding her biodad. “What if something happens to her there? What if she can’t come back? What if she doesn’t want to?,” she wonders. He confesses that he, too, kinda doesn’t want Claire to find any mention of Jamie, “because once we do, you’ll go back to Boston.” And that earns him a sudden, passionate smooch from the redhead.

Meanwhile, Fiona returns the pearls — Jamie’s wedding gift, ye ken? — that Claire gave to Mrs. Graham after her return from the past. And Joe calls, wondering when Lady Jane is going to return to Boston. (He gets a very vague response.) Then Claire, Roger and Brianna travel to the national archives and find that the manifests there stop before the time Jamie would’ve traveled. For Claire, it’s a sign to stop looking.

At a bar that evening, Roger tries to buck up Dr. Randall by pointing out that other repositories of information may prove more fruitful. But Claire is distraught, remarking that she’s chasing the ghost Mrs. Graham warned her to forget. And while a female performer recites Robert Burns’ “The Author’s Earnest Cry and Prayer” in the pub, Claire notes that she used to quote the “freedom and whisky gang thegither” line to Jamie, then adds that she’s done with the search. “It’s time to go home.” The next time we see Claire and Bree, they’re on a plane back to the States.

MEET ALEX MACKENZIE | Jamie’s chunk of the episode begins at Helwater in 1756, as the Dunsany family returns from Italy. In addition to Lord and Lady Dunsany, there are two young adult daughters: Geneva, who’s kind of a haughty bitch, and Isobel, who’s much kinder. Jamie is going by the name Alexander MacKenzie there; when Lord Dunsany summons him, he informs Jamie he knows he was a Jacobite but isn’t planning on telling his wife, because they lost a son (who was fighting for the British) at Prestonpans.

The stablehands so detest having to escort Geneva on her rides, they draw straws. And when Isobel overhears Jamie making a comment about her sister’s nasty disposition, she’s entertained — and she agrees. As the pair chat, Isobel remarks that she’s known John Grey since childhood, and “I imagine he’ll make someone a good husband.” Jamie gets a very strange, very knowing look on his face and gently suggests that “The major’s passion lies in soldiering.” Still, Isobel remains all heart-eye emoji about Lord John, and Jamie’s like, “Welp, I tried!” 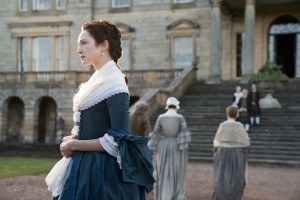 DEFLOWERING UNDER DURESS | By 1757, Lord and Lady Dunsany have promised Geneva to Lord Ellesmere, an old “goat” whom Geneva deems unworthy of de-virginizing her. So when John’s brother (the one who let Jamie live after Cullloden) visits at the same time John does, she gets him drunk and he spills Jamie’s Jacobite secret. Geneva then uses that to blackmail the groomsman into being the first to ride her pony. He’s angry! He’s insulted! He… eventually agrees to it. (I mean, she does threaten to expose him in a way that would potentially bring trouble to Jenny and all at Lallybroch, so there’s that.)

And that set-up is responsible for the line that made me giggle, the one that feels as though it were written directly for all those hot and heavy for Sam Heughan and the character he plays. As Jamie is unbuckling and untucking and taking the requisite forever to shed his clothes, he finally gets down to just his shirt. Geneva averts her eyes, which causes him to tell her, “Ye can watch me if ye like.” Purveyors of the Female Gaze, we now have a rallying cry!

“Should we get on with this, then?” he asks gruffly. They draw near hesitantly, and he’s barely touched her when she blurts out that she doesn’t know what she’s doing. She asks if it’ll hurt, and he answers, “I think not, if I take my time.” Claire, fate gave ye a rare man. And God! Ye taught him well! And I will give Jamie this: He’s certainly giving this strange situation the ol’ college try. There’s kissing. There’s touching. There’s caressing. At one point, he runs his tongue over Geneva’s chest as though he’s trying to keep up with a melting ice cream cone on a humid August day. And then eventually there’s a lot of thrusting, and it’s over.

Then Geneva says she loves him. He very gently explains that what she feels is lust, not love. And then the next time we see Geneva, months after her marriage to Ellesmere, she’s super pregnant. OOPS. 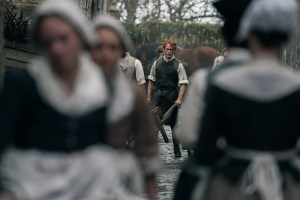 SON OF A… | It gets worse. The Dunsanys (with Jamie as footman) rush to the Ellesmere estate when Geneva goes into complicated labor, and though her son is born healthy, Geneva hemorrhages afterward and dies. Isobel knows the baby, named William, is Jamie’s, and she slaps him in her grief. But that emotional reaction is trumped by another: A fracas leads Isobel and Jamie to the parlor, where Ellesmere is holding William in one arm and a dagger in the other hand. He’s crowing to the Dunsanys about how he knows the child isn’t his. “You promised me a virgin! What I got was a whore!” Then an also highly upset Lord Dunsany pulls out a pistol, and Jamie acts without thinking and steps between the two men.

Jamie cajoles his employer into handing him the weapon, and Lady Dunsany pleads for Geneva’s widower to let them raise the child, but then Ellesmere cries that he’ll “kill the bastard before I let you have him!” and moves to hurt the child with the knife. Almost before you even know what’s happening, Jamie uses the gun to shoot Ellesmere, who falls to the floor, dead, with William in his arms. (It’s as OK as it can be: The baby is fine.)

Lady Dunsany later tells Jamie that there’ll be no charges pressed against him for Ellesmere’s death, and that she knows he’s a Jacobite, but she’s so grateful for his actions in protecting little Willie that she and Lord Dunsany would be happy to arrange for him to be released from his parole anytime he likes. Jamie lights up at this, but in a flash he realizes that means he’d have to leave the baby behind. Grateful, he says he’ll stay at Helwater for now.

A HARD RAIN’S GONNA FALL | Seven years later, Willie has grown into a cute, kind of bratty kid who loves Jamie… and looks a lot like him. And when Jamie realizes how much they resemble each other, he figures that he has to leave for good before anyone catches on. John Grey happens to be visiting with news (we’ll get to that in a sec), and Jamie thinks he’s come up with a suitable bargain: He offers Grey his body in exchange for John acting as Willie’s surrogate father. John is taken aback — “I should probably want you ’til the day I die,” he admits — but turns Jamie down, saying that he’ll happily look out for William… and it’ll be easy, because he’s going to marry Isobel. Now it’s Jamie’s turn to be shocked, but he’s pleased to hear that his son will be watched over, and he clasps John’s hand with both of his own as he pledges his eternal friendship. Jamie doesn’t kiss him, like happens in Voyager (it’s chaste!), but the exchange is touching nonetheless.

His last night at Helwater, Willie walks in on Jamie praying, and says he wants to be a “stinking Papist” like the groom. So Jamie baptizes him “William James” and gives him a carved snake — like the one his brother Willie gave him — and swears him to secrecy about the Catholic thing. “I haven’t got anything for you to remember me,” the boy worries. “Dinna fash, lad. I’ll remember you,” Jamie says.

Then Jamie rides off, and the boy runs to stop him, and everyone is trying really hard not to cry.