A very important man in Jamie Fraser’s life re-enters the picture in this week’s Outlander, while a crucial one in Claire Randall’s makes a permanent exit.

In other words: Welcome back, Lord John! And rest in peace, Frank.

There’s a lot to get to, so let’s not tarry: Read on for the highlights of “All Debts Paid.”

THE ARRANGEMENT | We check back in with the Randalls in 1956. Claire studies for med school and Frank makes breakfast. It’s clear that, while they’re not passionately in love with each other, they’re getting along well… until she suggests that they go see a movie. The problem? He’s already seen both films she suggests, and he’s done so with someone he’s dating. “We agreed we were free to…” he trails off, and she nods hastily. Ah, so it’s like that then. 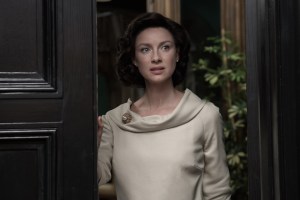 Frank maintains that he’s being discreet, and she agrees… until the day of her medical school graduation, when Frank’s lady shows up at the house thanks to a miscommunication about timing. The photo at right is of Claire opening the door to find Sandy, Frank’s girlfriend, standing on her stoop, and if you take one glance at Claire’s eyebrows, they’ll give you the exact feel of this awkward scene.

Claire pastes on a smile and hustles everyone out to a restaurant, but she’s waiting like a coiled viper when Frank returns home later. He’s a wee bit drunk and a bigger bit not wanting to have this conversation, but he’s ready to match her nastiness with a little of his own. When Claire refers to Sandy as his “blonde harlot,” he gets angry and spits back, “Green ain’t your color, Claire.” And when she demands to know whether he’s had sex with Sandy in their bedroom — “On those twin beds?!” I yell incredulously at the TV — he gives as good as he gets: “I think our bedroom is far too crowded already, wouldn’t you agree?” In the end, Claire tosses out the idea of getting a divorce, but he won’t consider it: He nearly cries as he says he won’t risk losing Brianna in a custody battle.” Claire counters that she’d never do that, but he slurs that he doesn’t believe her. “Forgive me, Claire, if I don’t risk anything on your promises. You’ve not been very good at keeping them.” Ouch. 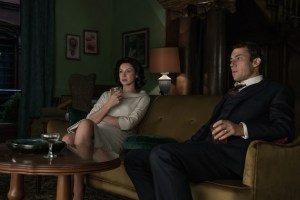 A ROUGH FAREWELL | Time passes. We see Brianna’s 16th birthday, then her high school graduation in 1966. And soon after, Frank announces that he’s going back to England to teach at Cambridge, and he’s going to ask Brianna to come with him. Oh, and he now wants a divorce so he and Sandy can marry. This sends Claire into a very quick rage, forbidding Frank from luring their daughter out of the country. “I would like to live the rest of my life with a wife who truly loves me,” he says tiredly, then wonders aloud whether Claire might have been eventually able to forget Jamie if Brianna hadn’t been a living, breathing, ginger reminder of him. “That amount of time doesn’t exist,” Claire whispers, crying, and then Frank leaves as she is called into the hospital for a surgery. (Go here for Caitriona Balfe’s thoughts on Claire’s behavior in this episode.)

She’s consoling one of her patient’s family members when Joe approaches with a grim look on his face: “It’s Frank. There’s been a car accident.” And as Claire walks into a sterile room, we see him, dead on a table. “If you’re close enough to hear, I did love you very much,” she says, crying softly as she puts her head near his. “You were my first love.” And then, pulling herself together, Dr. Randall leaves the room and ostensibly prepares herself to give Brianna the awful news.

A BRIGHT SPOT | Fun fact: Even though he doesn’t undergo the painful loss of a loved one in this episode, JAMIE STILL HAS IT WORSE. It’s 1755 and he’s in Ardsmuir Prison, a drafty, damp, crowded, rat-infested facility that’s just received a new governor: John Grey. As the exiting governor/warden (Hi, Harry Quarry!) leads Grey around his new duties, he points out Jamie, who’s dirty, cold and skulking about in a corner of the prison yard. “The only man we keep chained,” Col. Quarry notes. “The prisoners treat him as their chief. They call him Mac Dubh.” Harry says that he treated Jamie like a prisoner liaison and dined with him once a week, then suggests that John — who is gobsmacked to see the man who caused him one of his worst humiliations to date — continue the weekly tradition with Fraser.

Once Jamie is back in his cell, a creaky voice asks, “So you’ve seen the new governor, then?” IT IS MURTAGH! HE IS ALIVE! WE ARE ALL NOT RUDDERLESS IN THE VAST WASTELAND OF LIFE! The not-so-great news: Jamie’s godfather is sick and getting worse, thanks to the abysmal conditions in the cell. Mac Dubh brings up the rat infestation and the scarcity of food the first time he meets with Grey, but both men are wary of each other and not much ground is covered. 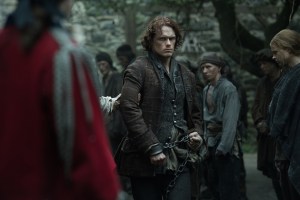 OPEN TO INTERPRETATION | Still, when a man is found on the moors raving in French, Gaelic and English, Grey recruits Jamie to help translate. The man’s name is Duncan Kerr, and he’s babbling about some French gold rumored to have been sent to Prince Charles in support of the uprising; the British want to find it, but no one has been able to in the years since the war. If Jamie will assist Grey, the governor promises, he’ll be able to shed the shackles he’s been wearing since he arrived three years before. But Fraser has his own conditions: blankets and medicine for all the ill prisoners. When Grey says that’s impossible, given their supplies, Jamie settles for the promise of a doctor for Murtagh.

Right before Duncan dies, he mentions a “white witch” associated with the “cursed” gold, and Jamie can’t help but hope that somehow, Claire managed to return to him. So he tells Grey the bare minimum, omitting details (like the mention of Dougal, Colum and Jamie’s mother, Ellen, and a veiled reference to his father, Brian) that make the dying man’s words seem like they’re a message for Jamie. And later, with the help of a few of his fellow prisoners, Jamie escapes while the men are out for their supervised peat-cutting duty.

CLEARING THE AIR | Jamie returns days later, taking advantage of Grey’s distraction while the governor answers the call of nature. “That’s how it’s done, William Grey, second son of Viscount Melton,” Jamie snarls, disarming the soldier and holding him captive with his own sword. Now that it’s clear that Jamie remembers him, Grey is humiliated all over again by the memory of his thwarted attack on the Scottish camp. “They were the actions of a foolish boy, and I regret them to this very day.” But Jamie reminds him that he promised to kill him once his debt of honor was repaid, which his brother did after Culloden. “Well, sir, here I am,” Fraser says, kneeling at Grey’s feet.

Lord John rubs his blade on Jamie’s face (not a euphemism), then announces that he doesn’t kill unarmed prisoners. And that seems to buy him a little respect with Big Red, who explains that, while on his walkabout, he’d found the box Duncan mentioned but it only contained a sapphire. He also talks more about Claire, and the two men warm to each other as they discuss how there are some people in your life that you “grieve forever.” John had one, too — a “particular friend” who died at Culloden, he says with wet eyes, and whose passing nearly broke John.

Things are very cordial as the pair plays chess. Jamie admits that the British woman John tried to save when he was a teenager was actually the missing wife in question, and that John’s actions on her behalf were rather admirable. “You wouldna speak to save your own life, but you would to save the honor of a lady,” Jamie says with respect. But then John totally misreads the room and puts his hand on top of Frasers, massaging it a little with his thumb as he says he’s sorry for Jamie’s loss, and then the whole situation goes… what’s that quaint British saying? Ah yes: t–ts up.”Get your hand off me, or I will kill you,” Jamie says, quietly furious. And as the prisoner takes his hasty leave, Grey cries a little. (See what Sam Heughan has to say about Jamie’s reaction to Grey’s overture.)

A NEW HOPE | Soon after, all of the men of Ardsmuir — including a much-improved Murtagh — are rounded up and led away. The prison is being closed, and they’re being shipped off to various territories and colonies as indentured servants. But because Jamie is a high-profile traitor and such, he can’t go abroad. So Grey pulls some strings and has him set up as a servant at the Helwater estate, home of the Dunsany family. “I couldn’t give you freedom, Fraser. This is the next best I could manage,” Grey says. Jamie looks confused. “I did not let you have your way,” he notes, and John can’t apologize fast enough: “I regret that particular moment of weakness. It was foolish of me.”

John suggests that Jamie not use his real name, in order not to ignite the Dunsany family’s anti-Jacobite sentiment. And then he leaves the Scot, promising to check in on his welfare every few months. “You gave me my life several years ago. Now I give you yours,” Grey says in parting. “I hope you use it well.”