As much as we appreciate Outlander‘s devotion to Diana Gabaldon’s novels, we’re really OK with the decision to part with the source material in this week’s episode.

Episode 3, “All Debts Paid,” included an event that those who’ve read the books knew was coming: the sad death of Claire’s first-and-current husband, Frank, in a car accident. But in a surprise to all of the Oldlanders who never expected to see Duncan Lacroix’s Murtagh again, the Starz adaptation revealed that Jamie’s godfather had, indeed, survived the Battle of Culloden and was a prisoner at Ardsmuir Prison with Jamie. (In the books, Murtagh meets his fate on the moors during the big fight.)

We couldn’t let two such momentous events go by without consulting series stars Caitriona Balfe and Sam Heughan, who gave TVLine their thoughts on which of the Randalls should garner more of your sympathy (you might be surprised) and which character inadvertently helps Jamie move forward in Claire’s absence (until things fall terribly apart). And for a full, detailed recap of the episode, go here. 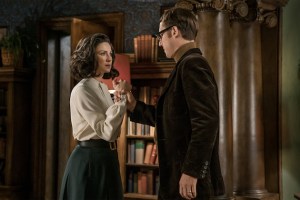 TVLINE | Right before Frank dies, he asks Claire for a divorce — and she comes at him hard, and pretty vicious, even though she’d suggested it years before.
CAITRIONA BALFE | Obviously I understand why she does that, but if you look at it from the point of view of Frank, I mean, really, this is not Claire at her best. [Laughs] Frank has made these great overtures and really wants to put their life back together and again, you know, he’s willing to choose to forget about certain things that she said. But for Claire that’s just impossible. I think when you’re hurt and when you’re wounded and when you’re suppressing huge parts of your personality, then that festers and it comes out in ways that are not always honorable or kind to the people around you. Frank and, to a certain extent, Brianna really paid a price for Claire’s misery… If you scratch the surface, it’s all raw wounds, and when people are in that vulnerable place and that painful place, it’s like a wounded animal: If you go to try and touch it, it’ll lash out and it’ll snarl at you. Claire’s sort of in that place. 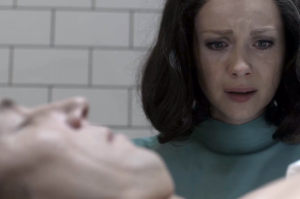 TVLINE | The episode is hard to watch, in a good way.
BALFE | It’s great material. That was stuff I was really looking forward to, because even in the books, it’s such beautiful material. It’s such a tragic story, because if you understand the circumstances, neither of them are wrong. What it does is it gives you great empathy for people in general, because you realize that a lot of times, people’s actions come out places of pain… People like to judge. People like to be like, ‘Oh, I’m team this or team that.’ But really, given any set of circumstances, how different would any of us act, you know? 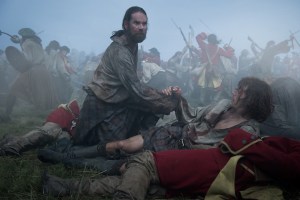 TVLINE | Murtagh is alive!
SAM HEUGHAN | Yeah! It is a departure from the books, and I think people are going to like it. He’s a great character… He’s such a fan favorite.

TVLINE | But he’s not doing so well when we first see him.
HEUGHAN | Yeah. There’s a responsibility for Jamie there in prison now, and he doesn’t really want the responsibility. He’s trying to live a simple life in the shadows and not deal with anything, but constantly he’s being forced to stand for the men or to look after Murtagh. So once again he’s forced into the situation of being responsible for people… Then, when he hears the story that there’s this white lady that possibly could be here, I mean, he knows it’s foolish but he can’t help himself but go and look for her. And I think that’s the point, when he gets to the island, he swims out there and he realizes what an idiot he’s been. It’s like ‘Oh, I’ve been fooling myself. She is actually gone.’ It’s very sad, but I think that’s why he can then tell John Grey about her, you know, because he’s like, oh, there’s some sort of piece there, some sort of consideration that okay, that’s part of my life which is over.

TVLINE | And then even when he starts to build a friendship with John Grey, even that falls apart after Grey makes his overture.
HEUGHAN | You know, that whole chess game was interesting, and I think it’s because Jamie is very wary of him. He has the Black Jack Randall, Redcoat [thing] hanging over him. But he starts to find a respect for John Grey, and that moment when his hand is touched, it’s terrifying for Jamie because of what’s happened to him before, and the power that John Grey has. But also he’s more terrified of what he will do to John Grey. It’s sad for him. He’s like, ‘Oh, I thought that you were a friend or something, that we could have a friendship. And actually, maybe you want something else from me.’ And that’s really sad, you know?

Were you happily surprised by Murtagh’s reappearance? How do you think the series handled Frank’s death? Hit the comments and let us know!