“There used to be confines to our storylines,” Madam Secretary star Téa Leoni says. She’s sitting in the Queens television studio where her CBS drama is filmed — Henry’s new office, to be exact, but we’ll get to that in a moment — and reflecting on how Elizabeth McCord’s political reality hasn’t changed drastically since the series premiere in 2014… but since the 2016 American election, the outside world sure has.

“Certainly, the handcuffs are off. [Now,] no one’s going to look at this show and say, ‘That would never happen.’ That world left the building,” Leoni tells TVLine. “So this is certainly a different endeavor than it was last season… I think our first season, the focus was more maybe on the aspirational side of the show in terms of the family, and the marriage. And now, that shift has gone to the politics. This is aspirational politics.” 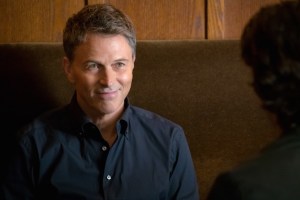 Sunday’s Season 4 premiere (10/9c) wastes no time getting at real-world relevancy as it finds Elizabeth accused of some serious wrongdoing via a fake news story about the death of a foreign dignitary. (Complicating matters: He died during a meeting with her on the first day of the United Nations General Assembly.) “It’s very timely, and it illuminates how easy it is for anyone to disseminate information that is false,” Leoni’s co-star Tim Daly says. “It’s an important discussion for us to have on the show, and for us to have as Americans, because having some kind of media literacy is becoming more and more important. Because we’re flooded with stuff that’s pure garbage.”

Still, Daly continues, he’s “reticent” to say that shows like his have much effect on society at large. “We as actors, and certainly the writers, are interested in illuminating things in our culture that are worthy of discussion and are problematic and are challenges. I’m not sure that we’re setting out to change anyone’s mind or behavior, but we’re out to engender discussions about these things because they’re important.”

He adds that the show has never uses the terms “Democrat” or “Republican” when discussing characters’ party affiliations, which engenders interesting reactions across the bipartisan fan base. “We have a lot of Republicans that love this show and a lot of Democrats that love this show, and because the ideas aren’t labeled with a ‘D’ or an ‘R,’ they’re open to it. They’re forced to just listen to the idea and not dismiss it because of where it’s coming from.”

Now, about that new office: Henry’s part of the new season largely is concerned with his recently accepted job at the Central Intelligence Agency’s Special Activities Division: “SAD,” Daly notes, laughing as he explains that the division’s specific task is Russia-related. And yes, “Dmitri comes back, because he’s a high-level asset.” 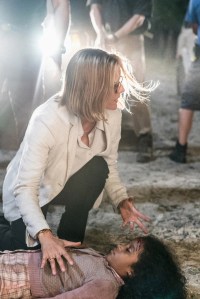 Episode 2 deals with a terrible incident happening to a local girl while Elizabeth is in Libya, and the Secretary of State’s efforts to help her (“The idea of solving a human crisis first and then being surprised by the impact that it has on a political situation, I don’t think we get to see that very often,” Leoni says); Episode 3 is when the government shutdown that executive producer Barbara Hall teased over the summer comes into play (“Ultimately it means somebody’s not looking for a solution but sticking with politics, and that’s the kind of thing that drives [Elizabeth] batty,” Leoni previews).

Throughout the coming episodes, the actress adds, Elizabeth has to balance her no-longer-a-D.C.-newbie status with what’s made her such an efficient political appointee: her ability to think like an outsider.

“I don’t want to wake up in fives seasons, and we have a policy wonk on our hands. That would be boring,” she says. “We all have to remind each other that we’re looking for the other way. What’s the simpler, less political way that this can get done? We’ll continue to do that.