When the fire with which Grey’s Anatomy concluded last season was put out, Bailey thought that the worst was over. But in Thursday’s episode, she learned that she’d thought wrong. Very wrong. The arrival of Jackson’s grandpa, Harper Avery, to assess the damage done — to his foundation’s bank balance more than to the hospital — led to one of Grey Sloan’s finest getting sacked. And, given Amelia’s diagnosis in the Season 14 premiere — coupled with her determination to keep her condition a secret — that first dismissed doctor’s head wasn’t necessarily the only one on the chopping block. When the metaphorical smoke cleared, who still had a job? Read on… 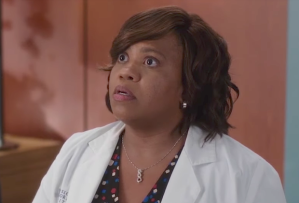 ‘IF THE FOUNDATION PULLS OUT, WE’LL FOLD’ | Early on in “Go Big or Go Home,” Bailey was on edge about Harper’s imminent arrival — with good reason. The grump didn’t like the welcome wagon that she rolled out to greet him, and it was pretty much downhill from there. When not belittling Jackie — sorry, Jackson — he terrorized the chief and, frankly, exhausted Catherine. Finally, concluding that Grey Sloan was a financial drain with which he didn’t want his foundation (or its coffers) involved, Scrooge announced that he was pulling its funding.

When Bailey couldn’t reverse Harper’s decision by pointing out the long-term upside of not merely having repaired the hospital but upgraded it, she warned that, because of Stephanie’s well-documented heroism, “to pull our funding now would bring about a PR nightmare for your foundation.” Fine, he said, relenting. Grey Sloan could keep its funding — but Bailey was fired! Adding insult to injury, he asked Catherine to take her somewhere else to “have her feelings,” because he had calls to make. “I will fix this!” Catherine assured Bailey. But Miranda had to let her do it her way since she’d “embarrassed that old white man!” Turned out, there wasn’t much need to worry after all: When next they entered the room, Harper was dead! Seizing the opportunity to undo the damage he’d done, Jackson and Catherine kept it to themselves that the geezer had canned Bailey. 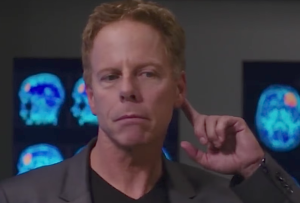 ‘NEVER SHOULD HAVE CALLED YOU’ | While Amelia remained adamant about not letting anyone at Grey Sloan know about her brain tumor, she was at least willing to call in reinforcements: specifically, Tom Koracick (Greg Germann, who’ll always be Fish to me). Besides being Hopkins’ head of neuro and “the most arrogant teacher [Amelia] ever had,” the doc was sharp as a scalpel and quickly deduced, based on his patient’s scans, that she was not — and long hadn’t been — of sound mind. However, rather than report her to the medical board, Tom had her inform Bailey, who, since she was busy, referred Amelia to Richard. During the trio’s meeting, Tom declared that she wasn’t to perform surgery again until he cleared her to do so. Later, DeLuca tried to clue in Maggie to Amelia’s condition under the pretense of discussing the poor way he’d handled their breakup. Alas, she didn’t notice the scans behind him or pick up on his hints about wanting to “Amelia-rate” the situation, she just accepted the apology that she decided he’d long owed her. (Since, after all, thanks to him, her father knew what sex sounds she made!)

As Shepherd continued to undergo testing, she tried to order DeLuca to pull the files on all the amazing surgeries she’d performed while “compromised” but was told he was Tom’s whipping boy now, not hers. When ultimately she did get the files, she feared she’d harmed many a patient. Intervening, Richard looked over the records and reassured Amelia that she had a better mortality rate than Derek — and he hadn’t had a brain tumor. Furthermore, he encouraged her to come clean with the people who love her. At last, Amelia confided in Maggie and asked for her help telling Owen — and flat-out asked her to tell Meredith, since she’d long accused her sister-in-law of being crazy, and this kind of made her right. At the episode’s conclusion, Amelia paged Owen, who was busy railing about how she’d pushed him away when he noticed her scans behind her. After Maggie filled in Mer, she and Owen were by Amelia’s side as she was checked in as a patient.

‘I DON’T DO LOVE TRIANGLES’ | When Mer’s former psychiatrist, Walter Karr, checked in, she took advantage of the opportunity to discuss with him her situation with Nathan and Megan (who, since she was recovering nicely, was eager to get back to son Farouk, stat). “I was wonderful” about it all, Grey hilariously pointed out. Yet she was still stuck in a love triangle! Later, she insisted to the shrink that her feelings toward Nathan were now “rage bordering on physical violence.” Calling B.S., he asked her to dig deeper. Before she could, Walter had to be rushed into surgery. Meanwhile, Megan unloaded on Owen. As the episode drew to a close, Mer admitted to Nathan that she was angry because he was throwing away a gift she was never going to get. “Show [Megan] that you love her,” she pleaded. “Please don’t blow this.”

‘PEOPLE SHOULDN’T ASK BIG QUESTIONS UNLESS THEY ALREADY KNOW THE ANSWER’ | In other plot developments, Arizona sang Carina’s praises to April, even going so far as to say that her new lover’s sexual “skill level is curative.” (Eliza who?) Carina, who it seemed had a kinky side, was also able to help her girlfriend with a woman who’d been in labor for ages by suggesting she try, er, manual manipulation. Elsewhere, Jo and Alex celebrated their reunion by canoodling in the elevator. After treating a teenager who’d been injured staging an elaborate hocosal, Jo staged a mini-hocosal of sorts to ask Alex to move back in.

So, what did you think of the episode? Hit the comments!