Warning: The following is a virtual IV drip of spoilers for the Season 13 finale of Grey’s Anatomy.

Going into Thursday’s explosive Grey’s Anatomy, it certainly looked as if the Season 13 finale was going to be unlucky for Stephanie. But Megan’s resurrection also promised to blow up Meredith’s fledgling romance with Nathan, and all those recent Jackson/Maggie scenes suggested that April might be about to get burned, too. Who, if any of them, made it out unscathed? Who made it out at all? Read on…

‘FIRE IN THE HOSPITAL TRUMPS RAPIST ON THE LOOSE’ | As “Ring of Fire” began, Meredith had just made it back to Grey Sloan to fill in Nathan on Owen’s Megan news when all hell broke loose. In the wake of the rapist’s detonation, fires were raging on floors 4, 5 and 6, and Bailey put April in charge of the outdoors holding area for evacuated patients. “Lord,” the chief sighed, “don’t make me have to tell Catherine Avery I burned her hospital down to the ground!” Since the fire overrode the lockdown, the doors reopened, so Jackson started running around looking for Stephanie. Upon learning that Erin had wandered off again, Mer made finding the little girl her priority, which didn’t sit well with Eliza, who wanted to focus on patients and let the police worry about missing persons. Ignoring Minnick, Grey went right on searching for Erin. When she bumped into Alex, she learned that his stalking of Jo’s husband had been, in his estimation, “a waste.”

As for Stephanie, it turned out she hadn’t been killed by the blast. She was burned but in good enough shape to assure Erin, whose leg had been impaled by some equipment, that the bad man wasn’t just gone but “very, very gone.” Before Edwards could remove the equipment that was stabbing Erin, she had to treat the girl’s leg, a painful procedure for which the doc recommended she distract herself by clenching her fists as she herself had when she’d undergone brutal treatments as a youngster. And “if you need to scream,” Stephanie added, “you just go ahead and scream.” (Note: She did.) Unfortunately, no sooner had Erin’s leg been patched up than their exit was blocked by fiery debris! A total badass, Stephanie soaked a blanket and her hair with water, wrapped up Erin and leapt through the blaze! 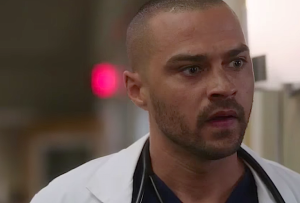 ‘I’VE HAD BETTER DAYS’ | Since it looked smokey as hell down below, Stephanie led Erin upstairs to the roof. Alas, by the time they got there, Edwards realized that, along the way, she’d lost her damn key card — they couldn’t unlock the door to get outside to fresh air! Stuck, Edwards wrapped Erin in the wet blanket, intending to wait for help. But in no time, she spotted her key card a few floors below, left the little girl briefly and returned worse for wear, yet victorious. This being Stephanie’s worst day ever, naturally, as soon as she and Erin were on the roof, the kid passed out. Meanwhile, Jackson returned from his unsuccessful search for Stephanie and got yelled at in a concerned-wifely way by both April and Maggie. That Pierce had been so worried about him did not go unnoticed by the ex with whom he’d so recently hooked up. Had the police found Edwards? No, because er, Eliza had forgotten to tell them she was even missing!

Though Ben had an understandable aversion to fire, he bravely charged back into Grey Sloan to show the authorities where he’d seen Stephanie with the patient he hadn’t realized at the time was the escaped rapist. When finally, Warren led the firefighters to the roof, they found Stephanie performing CPR on Erin. “You took the scenic route!” she shouted. From there, Edwards wouldn’t leave Erin’s side. She also wouldn’t hear it when told the O.R. floor was off limits. If it was, they’d have to operate in the E.R. She’d been through hell to save that kid, she said, and “I did not do all of that so this little girl could die!” In the end, Erin pulled through. Then and only then did Stephanie let herself collapse. The next day, while her burns were being painfully treated, she informed Richard that, after spending her whole life in hospitals, as a patient or a doctor, “I need to travel and… explore… and hike… and breathe… away from the monitors and the blood.” As such, she quit. But “you changed my life, Dr. Webber,” she added. “You taught me how to take my past and find my path. Thank you.”

‘YOU’LL KNOW WHAT TO SAY WHEN YOU SEE HER’ | When Owen awakened from probably a much-needed sleep and heard about the Grey Sloan disaster, he wanted to go to work and pitch in. However, Amelia pointed out that, due to the fire, the helipad was off limits, so Megan was being transferred to a nearby military hospital, for which they’d be leaving immediately — he should be there when she landed. Meanwhile, at Grey Sloan, Mer finally located Nathan — in surgery, even though the O.R. wing had been evacuated. He couldn’t just quit, he pointed out. “I have a man’s lung in my hand!” After Mer helped him complete the operation — and got her lover some oxygen outside — she gently broke the news to him.

“Remember the dream where [Derek and Megan] come back to us?” she said. “Nathan, they found Megan. She’s alive.” At first, he couldn’t believe it. “That’s not funny,” he said. (Lovely, crushing performance by Martin Henderson there, BTW.) When at last it sank in that Grey wasn’t playing a cruel joke, Nathan immediately wanted to take off for the military hospital. Then, suddenly, he felt guilty about how excited he was. Don’t apologize, Mer told him. “If this were Derek, I would already be gone.” And so, off he went. At the military hospital, Owen seemed to have an out-of-body experience as the moment of Megan’s arrival drew near. When the chopper landed, we got a glimpse of the patient and her red hair but not a close enough look to say for sure whether it was really her. 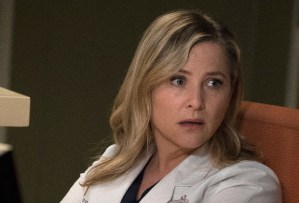 ‘I WENT TOO FAR’ | The day after the blaze, Catherine demanded Bailey, Richard and Eliza explain why it had taken so long to find Stephanie and Erin. Minnick blamed Stephanie for not following protocol and Richard for undermining her by springing Edwards too quickly from therapy, which so enraged Bailey that she was ready to can Eliza. Stephanie, the chief argued, did know when to follow protocol, because she had been taught right — she hadn’t been taught to be some kind of doctor-bot. Off that meeting, Eliza shot down Arizona’s hopes for a hot date night, because instead of canoodling, she had to pack — she had been fired after all! Finally, Maggie apologized to April for yelling at Jackson — that wasn’t her place. But he liked Pierce, Kepner noted (if a bit sadly). April could tell. She could also tell that Maggie was into Jackson. So “you should just tell him” you dig him. And that was that for Season 13.

What did you think of “Ring of Fire”? Grade the finale in the poll below, then hit the comments. Will you miss Stephanie? Do you think Megan’s really Megan? Do you like the idea of Maggie/Jackson?