Warning: The following article contains spoilers for the Season 14 premiere of Grey’s Anatomy. If you haven’t watched yet, you might want to do that — stat — before reading further.

We’d heard over the summer that Season 14 of Grey’s Anatomy was going to be “funnier… sexier… lighter,” and if Thursday’s zippy premiere is any indication, that might have been an understatement. In the two-parter — penned by the ABC drama’s former executive producer/head writer, Krista Vernoff, who only recently rejoined Team Grey’s as co-showrunner — Owen and Nathan were happily reunited with Megan (who, upon seeing her brother, deadpanned, “Who are you?”); Ben, playing the role of Jo’s new Stephanie, helped get her back together with Alex (and save her from any future trysts with an adorkable sub-intern); Maggie and Jackson took turns seeing which of them could be more awkward around the other; and Arizona rebounded from being ghosted by Eliza by hooking up with a beautiful stranger… who turned out to be DeLuca’s sister, Carina!

Of course, this being Grey’s, “Break Down the House” and “Get Off On the Pain” weren’t all laughs. Megan turned down Nathan’s proposal because, as he explained to Mer, “she thinks I’m still in love with you”; Owen, as estranged as ever from Amelia, kissed Teddy, but she refused to start anything with a married man; April, hurt by “the Montana situation” with Jackson, told her ex that she had to move out; and, while participating in the very Masters of Sex-y research that Bailey was allowing Carina to conduct at Grey Sloan, Amelia learned that she had a brain tumor the size of a baseball! Here, Vernoff previews what’s next, from hard choices to second chances.

TVLINE | Going forward, how does Meredith handle knowing that she is the obstacle that’s standing between someone she cares about — Nathan — and someone she really likes — Megan?
As you can tell from her reaction at the end [of the premiere], initially, it makes her angry. We spend a few episodes unpacking this story. It’s complicated for her. It’s complicated for Nathan. It’s complicated for Megan. There are no easy answers. What I love about the way we’ve told this story is that we’re doing a love triangle where these two women never turn on each other. That’s what feels fresh about it to me. [After Mer performed groundbreaking surgery on Megan], they have been through something together, and they have a profound amount of respect for each other. 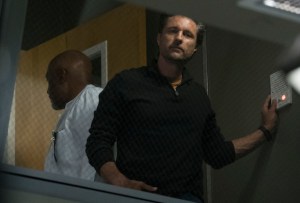 TVLINE | And, at the same time, Mer and Nathan’s feelings for one another obviously didn’t just evaporate.
Exactly. Feelings don’t disappear overnight. They get really complicated by the fact that everybody respects everybody involved. And everybody involved has been through a lot in this lifetime. So there’s nothing petty or small about the way we’ve told this story, and I’m really proud of that.

TVLINE | Now that Alex and Jo have reunited, what’s next for them?
There’s joy and romance — and these two characters really earned this. They were apart for a long time, and things were so complicated between them. Now, I’m really enjoying some good times with them.

TVLINE | Even though Paul is still out there…
Yes, that is a dark cloud, and domestic violence is no laughing matter. But it wouldn’t be Grey’s Anatomy if there weren’t some dark and twisty turns along the way.

TVLINE | Let’s talk about Owen kissing Teddy. Was that more about him really wanting her or him being upset about the state of his non-marriage?
I believe it was both. Teddy and Owen have been longing for each other since we first met Teddy. And we played that. The two of them have talked about this in the past, and then they went on to have great loves with other people. Owen has always — since the beginning of Teddy knowing him — been with someone else, and she just loves him. So I think his kiss is driven both by his desire for Teddy that is undeniable and the fact that he’s been so totally rejected by his wife. It’s a combo platter. 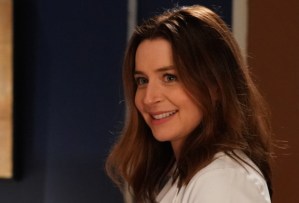 TVLINE | Speaking of Owen’s wife… is it safe to assume that Amelia’s brain tumor has been the cause of some of her more erratic behavior?
That is indeed safe to assume. And you can look forward to the [story delving into the] complexity of what it is to have a marriage in crisis and then find out there’s this illness, and then potentially know that the illness caused the crisis. Does that allow you to come back from the crisis?

TVLINE | Does that mean we’ll finally get to see Amelia smile again?
Yes, 100 percent, you will.

TVLINE | Tell me about the decision not to move forward with Arizona and Eliza’s relationship.
I felt like the Minnick story had been told, not necessarily in terms of Arizona but in terms of [Eliza’s] impact on the hospital and on Richard. One of my goals for this season was to eliminate some of the darkness and us-against-them dynamic and return to a more all-of-us-together-against-the-limitations-of-medicine [feel]. There were a lot of people mad at each other and hurt by each other, and my goal was to bring in more joy and more light and more humor. I wanted Bailey and Richard side by side again. So I made that decision, due to Minnick’s overall impact on the hospital. I am aware that that will be hard for the fans, because there was also a romance there…

TVLINE | I think they’ll get over it. Carina’s a blast.
I don’t want to spoil too much, but I can tell you that I’m having a great deal of fun writing her. She’s terrific and funny and sexy. 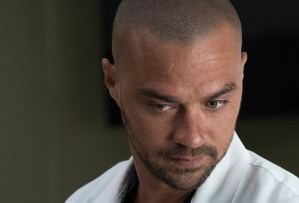 TVLINE | April and Jackson’s last conversation felt like a real ending between them. Was it?
Those two people are divorced. And we went through a tremendous amount of drama and pain with them in recent years. And what I love about what they played in the finale is that they were adults together. April has grown up. She has recognized that a dynamic is causing her pain… and that maybe it’s not the smartest thing to keep living with your ex-husband when you still have feelings for him. And so, rather than accusing anyone of anything, she’s making a very adult decision to take care of her own feelings.

TVLINE | Will she be rewarded for her maturity?
Yes. April is going on a complicated journey this season.

TVLINE | The sub-interns were pretty hilarious. Will any of them be sticking around — or will we be getting new interns?
One of the things we’re doing this year for the first time ever is showing you some of the interviewing process for new interns. And yes, we will have some new ones.

So, what did you think of the Season 14 premiere? Grade it below, then hit the comments.