Midnight, Texas‘ climactic Season 1 finale began with the Midnighters concerned with one veil — the one separating the living from the dead — and ended with them in the presence of another: the one Olivia wore when she wed Lem (!) at the end of the episode.

In between, there was a whole lot of talk about deflowering Fiji, followed by the actual act, which turned out to help save the day. Oh, and Manfred really upped his psychic medium game. Before we get executive producer Monica Owusu-Breen‘s take on the season-ender, how about a really quick recap?

* As Jeremy walked Fiji back to her place, he told her to prepare: The demon Colcannar wanted to have sex with her to bring about the end of the veil, and there’s really no denying that guy. She then realized that “Jeremy” was really just one of the wraiths that had been wreaking havoc in town, and after his touch burned her, he warned her to do as the demon wanted. 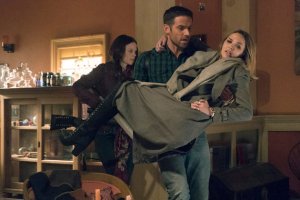 * The rest of the gang consecrated some weapons and set out to save Fiji. During the fight, a wraith burned Olivia very badly. She, Bobo and Creek took shelter in Fiji’s house. Meanwhile, at the pawn shop, Manfred located some demonically imprinted items and announced his plan to Lem: “I plan to let evil hijack me.” Before he performed the spell, Manfred called Creek to tell her he loved her, and she replied in kind. Then multiple really bad spirits jumped into his body in exchange for the promise of being freed from this realm when everything was over.

* As Demon Manfred (DeMonfred?) faced off with the summoned Colcannar, Bobo shut down Fiji’s plans to kill the demon via sex by suggesting that they make love instead — thereby de-virginizing her and thwarting Colcannar’s agenda. “Don’t tell me you haven’t thought about it,” he says. Fiji says no, admitting that she accidentally killed Jeremy the first and only time she’d been intimate with anyone, but Bobo maintained that he wasn’t afraid of her or her potentially lethal powers. Then they made love, unleashing a wave of power that greatly angered Colcannar.

* And then, while the Rev. and Lem backed him up, DeMonfred shot beams of power from his hands and destroyed Colcannar, and the demons in his body left and went back to hell as the veil re-sealed. 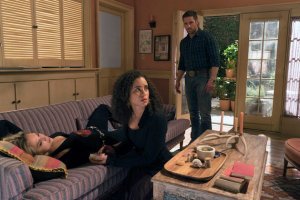 * Creek drove Olivia to the hospital, where she hovered near death. But a devastated Lem dripped some of his super-powered vampire blood into her mouth, and she healed instantly. The pair reunited, and they later married with all of their friends — including Chuy, who returned to town — in attendance.

But don’t think that Manfred’s sealing of the veil means all is fine and good — the medium is still bleeding from his ears — and Owusu-Breen reminds viewers that “there is a permeability between worlds” in the quirky little town, “so it’s not over… A Band-Aid’s been put on it.” Read on for more of her thoughts on:

MANFRED’S DEMON LEFTOVERS | “Manfred took an enormous risk doing that,” the EP says. “What does it mean to take on evil, even if you’re doing that for good? I think that’s a question that Manfred, knock on wood, will be exploring next season.”

LEM AND OLIVIA’S WEDDING | The vampire and the bounty hunter do marry in the Charlaine Harris books on which the series is based, but it’s more of an elopement. Owusu-Breen says she wanted something bigger for one of her favorite couples. “Lem and Olivia, to me, are super special… I love the fact that she doesn’t want to be turned into a vampire. I love the fact that there’s a million reasons why it shouldn’t work out, and there’s a million reasons why Olivia shouldn’t want to be married,” she says. “That leap of faith for that character to actually go that far mattered a lot to me.” Plus, after the ugliness of Lem’s attack on her as the veil was thinning, “they would need to come back stronger, and so we just wanted to give them a happily ever after after awfulness.”

FIJI AND BOBO’S GARDEN LOVIN’ | Owusu-Breen credits much of the success of the Bobo/Fiji love story to cast members Parisa Fitz-Henley and Dylan Bruce. “There is just tenderness between them, and they’re so kind to one another,” she says. The characters “take care of one another, even when there was nothing to be gained. Bobo was going to have her back regardless of whether she wanted him or not, because he had been there for her, and I think that friendship and that trust between them made the ending so much more satisfying.”

Owusu-Breen remembers that the garden-set love scene was the last one shot in Season 1, and it happened at 2 in the morning. “The core of the show is about people who love each other and the importance of that, and how it feels dangerous, but that love actually gives you strength,” she says. “To end the season on that just felt so perfect.”

Now it’s your turn. What did you think of the episode? Grade the finale via the poll below, then hit the comments with your thoughts!