So exactly what do you wear for a date with a demon who wants to deflower you in order to bring about the total annihilation of everyone you know and love?

That’s one of the myriad worries running through Fiji’s mind in this exclusive sneak peek from Monday’s Midnight, Texas season finale (NBC, 10/9c), an hour that deals heavily with the fallout from Episode 9’s big reveal: The quirky town’s resident witch is a virgin, which makes her supernatural catnip to a hellspawn named Colcannar. Oh, and once the evil creature has his way with Fiji, the thin veil separating humanity and the spiritual realm will rip apart like so much wet paper towel.

It’s a lot for Fiji to handle, says star Parisa Fitz-Henley, who plays the stressed-out sorceress — especially given that the normally placid earth mother had to blurt out her sexual status in a room full of her besties, not to mention the guy she’s crushed on hard all season.

“Fiji is in a place where she feels at a loss, having to be that vulnerable in front of her friends, [who are] really her family,” Fitz-Henley tells TVLine. After putting in a decade of trying to blend in, “she’s having to deal with her feeling of really being an outsider, even in this family that she’s created for herself.

“Going into the finale,” she adds, “going into this vast battle with Colcannar, we’re going to see her deal with that feeling of being an outsider amongst people that actually love you.” 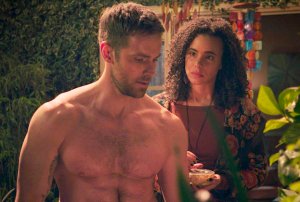 Funny she should mention “love,” given that Bobo — the aforementioned crush — recently uttered the L-word to Fiji, and she kinda freaked. She also didn’t respond in kind. We asked Fitz-Henley how much of her character wants to believe in the pawn-shop proprietor’s affections versus how much of her wants to sacrifice the possibility of a relationship for his own safety. (Colcannar aside, there’s still the matter of the guy Fiji accidentally set on fire and killed the first and only time she tried to have sex.)

“One hundred percent and another 100 percent,” Fitz-Henley says, laughing. “Fiji’s really torn, because she’s been living a fractured life for so long. There’s an entire being within her that wants to be, in her mind, a normal person… And this other part of her is then like, ‘You’re not a normal person, and you hurt everyone that you love and everyone that has ever been close to you has been distanced from you and if you have to watch this person burn, it will kill you.”

She chuckles again. “So just think about which one is the more important one.”

Watch Fiji prepare for her rendezvous with Colcannar — while her friends have an epic regrouping — via the exclusive sneak peek below, then hit the comments with your predictions for the finale.