A year-and-a-half ago, Christina Ochoa was crashing on a friend’s couch and borrowing money to get to her auditions. Now, she is about to pivot from a lead role on Syfy’s summer splatterfest Blood Drive (which airs its finale tonight at 10/9c) to starring on The CW’s first military drama.

And somewhere amid all that, she made time to pay the occasional visit to TNT’s Animal Kingdom, as surfer girl Renn.

TVLINE | I’m always fascinated when an actor has their “moment” — when because of scheduling, lead times and whatever, all of a sudden they have not one but three projects popping at once. What’s that like on your end?
It’s something I can’t quite process even though it’s happening. There seems to be a part of me that doesn’t really believe it’s happening. I count my blessings, but when people are like, “Oh, I just saw your show,” the fact that I actually have the capability of asking, “Which one?” is something I never thought would happen.

TVLINE | Actors, you just hope for that one job.
Well, maybe a year-and-a-half ago I was unemployed, I had $600 to my name, I was crashing on a friend’s couch, borrowing money to get to an audition — and lo and behold, that was Animal Kingdom Season 1. But it’s not that long ago. It still hasn’t set in.

TVLINE | Who would you in real life be friends with — Animal Kingdom‘s Renn (above), Blood Drive‘s Grace or Valor‘s Warrant Officer Nora Madani?
Ooooh…. Probably Renn. Yeah, even though she was a smaller part for me, I think she is maybe less “stuck up” in a certain way. [Laughs]

TVLINE | Blood Drive was shot on a shoestring budget, all the way in Cape Town, you were caked with blood for maybe 60, 75 percent of the time…. What was most challenging about that project for you?
The challenge came with tackling such a deeper, big part. I went from working maybe one day every four weeks for a couple of scenes in one episode, to working all day, every day. Learning about stamina and my own work discipline, learning what I’m good at, what I’m not…. that was a big challenge. And then there’s the blood. There are three types, and each has its own challenges, depending on budget and purposes. [Laughs] You have the sticky blood, you have the dried blood, and you have the mouth blood — that you can eat. 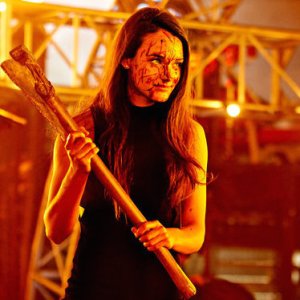 TVLINE | Were you disheartened to find out that Grace’s mission would not lead to a warm, fuzzy reunion with her sister? Or did you know from go?
I knew the end game from Day 1. Because of the format of the show — we went straight to series — we had all the scripts ahead of time. Also, before I signed on they w anted to make sure I was comfortable knowing exactly what I would have to be doing on the job. I mean, there’s anal [sex] in the pilot, and all sorts of things that were pushing boundaries in a lot of ways. They wanted to make sure we were all drinking the Kool-Aid, that we were all on board to have fun and do this outlandish show. That was one of the reasons why they gave us our full character arc, before we even left for South Africa.

TVLINE | So you knew that at some point Old Man Heart would peel off his face to reveal cute-but-psycho Karma.
Yes. And how lucky did we get, because initially another actor was attached and fell through. We could not find another Old Man Heart, but then Sean [Cameron Mitchell, Black Sails] came in and scooped up that role and was such a powerhouse.

TVLINE | He was perfect, like a sinister Colonel Sanders.
That’s a good analogy. [Laughs] I like that comparison.

TVLINE | This is almost rhetorical, but at any point during filming would you look at Alan Ritchson (who plays Arthur), look at Colin Cunningham (Slink), and remark to each other, “This is so f—ked up”?
Whenever we would get to set and see what they had done with it, or we would do rehearsal for the first time, there was such a — pardon my French — “What the f—k are we doing?!” moment and we loved it. We relished those moments, because they were kind of the ones that we would push the most with, and have the most fun with. “Oh yeah, of course she has this weird robotic arm that’s fisting Christopher. Duh! What else would she have?” They got crazier and crazier and every week you think, “OK, we’ve done the shock value, there’s nothing else they could pull out of our asses to surprise the audience. 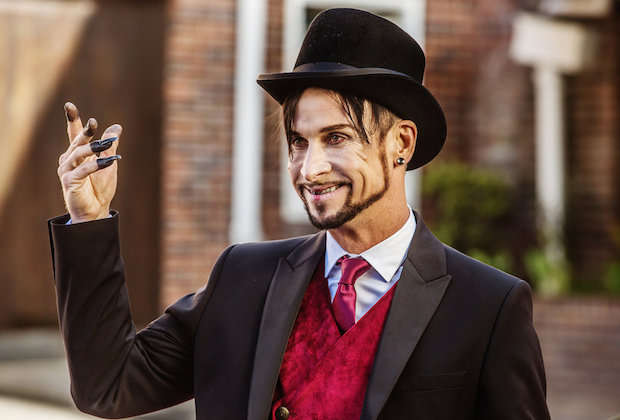 And then James Roland or the production designer would come up with something that would just take it to a whole new level.

TVLINE | Or even just be bizarre. As I was saying to Colin, Slink’s living room there with the dentist’s chair….
Can we take a second to just acknowledge how fantastic and phenomenal Colin is in that role? That was not on the page.

TVLINE | James told me how for his audition tape he had vape smoke trickling out of his mouth.
It was unbelievable. It was wonderful. And again, not on the page. He totally devoured that role. 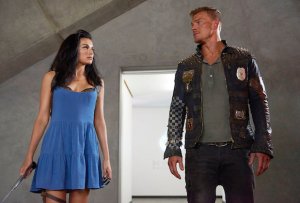 TVLINE | What can we expect from the finale? Is it sufficiently bananas?
It’s bananas. It’s also a culmination of everything you’ve been waiting for, all the storylines, all the plot twists. Everything sort of comes together in this really epic, final throwdown. The characters you hopefully love are banding together and becoming enemies again, and then coming together again and having to do battle…

TVLINE | Is any kind of door left open for more Blood Drive? I know James said he might franchise out the Midnight Grindhouse brand.
With the way that things are going, and with the amount of different platforms, and given the support we’ve had from Syfy and UCP, I wouldn’t be surprised if there were something that kind of lends itself to continuing within that world. I don’t know about a second season; everybody asks, but I don’t know. We have no news, which we’re assuming is good news! But I speak for myself and I hope most of the cast when I say that that even if not for a whole second season, we would be honored and lucky to tackle these roles again — whether they take it the anthology route, or a movie, or a streaming thing. 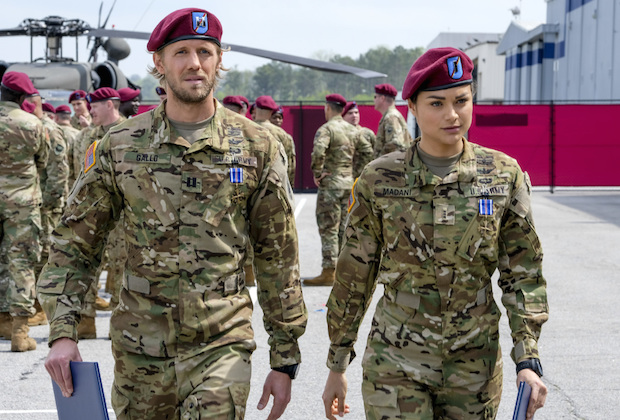 TVLINE | As you moved on to do The CW’s Valor (costarring Matt Barr), did you find yourself having to rein in the occasional expletive?
Oh, 100 percent. I curse like a trucker now thanks to Grace. Not that I didn’t before, but now every third word is an F-bomb. It’s been a little bit challenging, because I obviously I’m on a network that does not allow that kind of terminology when referring to another human being. [Laughs] But I think that Nora Madani has an underlying current of fighter that I picked up from playing Grace. So what I learned by the end of [Blood Drive] Episode 13, I was able to then bring to Nora.

TVLINE | Valor of course is new frontier for The CW, being a military drama. No supernatural elements, no costumed superheroes. Does that make the venture just that much more scary for a cast member? Knowing that that’s possiby working against it?
I can’t speak for the rest of the cast, but…. Animal Kindgom was a departure for TNT. And Blood Drive certainly was a departure for Syfy. And now Valor is a big departure from the kind 0f content that is normally attributed to The CW. I love being part of a team, a community of people, willing to take a risk. I wouldn’t change it for the world. I would much rather be on Valor than on something that’s almost a pre-sold, done deal.

TVLINE | And [CW president] Mark [Pedowitz] has been wanting a military drama for a while.
Yeah, he’s been very enthusiastic. Hopefully it’s reflective of the audience that he wants to cater to.

TVLINE | We do have three new military dramas this fall — The Brave on NBC, SEAL Team on CBS….
I haven’t heard of them! [Laughs]

TVLINE | Yeah, yeah. What do you think will help Valor stand out, set it apart?
Obviously the female protagonism is very important for our show versus the other ones. And I also think that the other shows are action-driven, or story-driven, or plot-driven; ours is very much character-driven. There’s a different cadence to what we’re putting out there. Having a show like this, where the interpersonal relationships are really at the forefront versus the mission or the action, is a bit different, I think. The wrapper is still action and plot and story, but really the heart of it is all character.