The hot rods competing in Julian Slink’s Blood Drive may be fueled by the red stuff, but Syfy’s freshman drama is powered by all manner of envelope-pushing perversity.

Airing Wednesdays at 10/9c (and not a minute earlier, whew), the grindhouse-style series stars Christina Ochoa (of The CW’s upcoming Valor) and Alan Ritchson (Blue Mountain State) as Grace D’Argento and Arthur Bailey, an experienced (and ribald) racer and the do-right lawman she is reluctantly partnered with on the titular gauntlet. In this richly realized dystopia, human blood is the new gasoline, mortality is a given and the burger you’re enjoying may or may not be made of the driver who lapped you 20 minutes ago. F-bombs are lobbed with vigor, the blood-spattered skin is bountiful and behind it all is the beating Heart (Industries) of this new world, an all-controlling conglomerate with an insidious agenda.

As Blood Drive enters Week 3, TVLine invited series creator James Roland to survey its trip to the small screen and open up about any detours dictated by Standards & Practices. Plus: the plan for an even crazier Season 2?

TVLINE | People can’t quite believe how violent, lewd and crude Blood Drive is. How does that make you feel?
It makes me feel great! It makes me happy, I’m not going to lie. I would literally jump up and down on set when we got the blood cannon to shoot 10 times more blood. You give the FX guys the note, “More blood,” but they’re used to being mildly realistic. [Laughs] They’d crank it up one notch and I’d be like, “No, go to 11! Make it insane.” I love that people are reacting to it.

TVLINE | Give me a flavor for 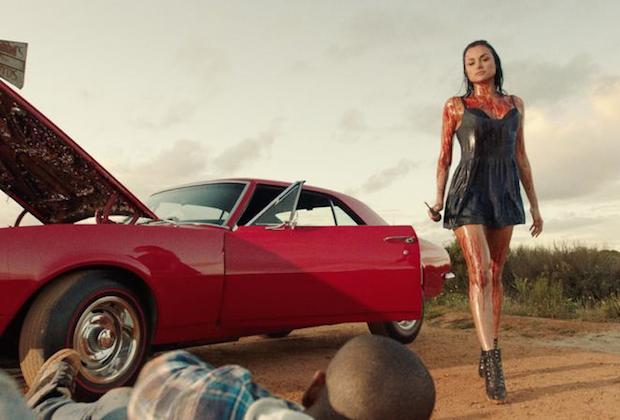 the initial feedback you got from Syfy brass after the first footage started circulating.
The first feedback we got was disbelief that it looked as good as it did, quite honestly. We had this incredible director of photography, Yaron Levy (TV’s Scream), and an incredible production and costume designer, so the first feedback we got was like, “Wow!” Flat-out disbelief. And then excitement. And then when the daily stuff started coming in with some of the more shocking content… there was some stuff in Episode 5 that made them hit the brakes at the studio. I think Standard & Practices sent out an email saying, like, “Hey everybody, don’t bother calling us for two weeks. Let us internally figure out what the hell to do with this episode.”

TVLINE | As a general rule, what can’t you do on Syfy?
Like with most censors in America, there are issues with nipples. Everyone’s “scared” of the female nipple, so we had to do some creative CGI work and stuff. But we got around nudity by doing the black bars — “Let’s push it as far as we can and then make them decide what we cover up,” rather than shooting PG-13 versions, which take more time and feel like we’re not being true to what its supposed to be. “Make somebody put a sticker over it.” And that kinda worked for us. By Episode 4, we were getting into using these black bars, so we were like, “If that’s the way we’re going to go, we’re going to have fun with it.” So in that episode there’s some fun with the shape of the black bar, let’s say. 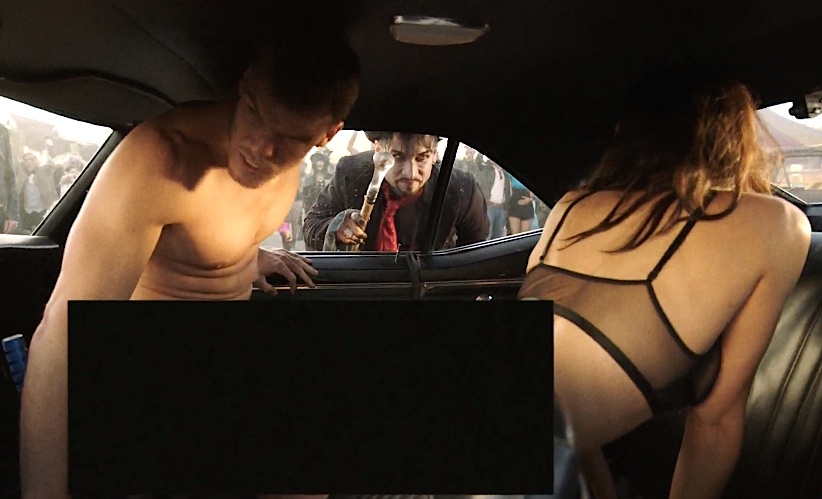 TVLINE | Is there the potential down the road for different DVD edits?
I would love it, but maybe less for content — in all 13 episodes there was one shot they made us cut — and more just for time. We were so ambitious in what we shot that we had to cut 14 minutes out of one episode! So I’d love to get some extended versions on the DVDs.

TVLINE | How is the complaint line — at 1 (325) 400-DGAF — holding up?
It’s good! That’s all [monitored by production studio] UCP, I don’t have access to it, but I’ve heard from friends that some of the audio they’re getting is pretty amazing. I’m hoping they use it for marketing.

TVLINE | You’ve got to be pleased with the casting — Christina Ochoa as the “anything goes” heroine, Alan Ritchson as the square-jawed do-right, Colin Cunningham (Falling Skies) as the slithery emcee….
I was going to say we “lucked out,” but we had amazing casting directors. Arthur’s a character who’s always saying, “No, don’t,” and while you need that moral center, at the same time it can get tiresome. So you need somebody who has a likeability to them, who has comedic timing and who looks like a Ken doll. Who else fills that bill but Alan Ritchson?

Christina has kinda taken the world by storm now. She’s the most open, sweet, unassuming person, she’s so smart — she’s like a Mensa member from a lineage of smarty-pants — and she’s so beautiful, so you’re expecting somebody who’s a little distant. But she’s so warm and inviting. She brought to Grace stuff that we didn’t really expect. She walked in with a journal where she would get into character and write, which was impressive. 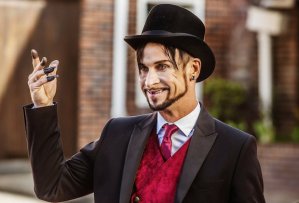 Look, I love this show, I created this show, but it’s easy to get caught up in the cheesier aspects of it and not try — to be like, “There’s blood and guys and boobs!” So to have actors come in and go, “It is what it is, but I’m going to bring a realism to every moment” was special, and that was true across the board. Colin’s a prime example of that, because Slink could be a cartoon character — and he is in some ways — but man, the gravity that Colin brought from the very first moment. His audition tape needs to be a special feature on the Blu-ray, because he steps out of this darkness, in a top hat, looks up and smiles — and his mouth was filled with smoke, so that all comes out like a dragon before he starts his lines. It was head-to-toe chills. I actually wrote the role for a friend of mine, who couldn’t do it, but the instant we saw Colin’s tape, it was a no-brainer. 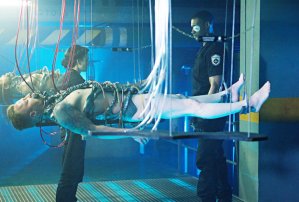 have a favorite supporting character?
Christopher and Aki (played by Thomas Dominique and Marama Corlett, right) surprised me, because they were kind of fun and yet they didn’t do a lot in the pilot. But because of what they get into – and there’s a lot of them in the back half of the season — their storyline got weirder and weirder and weirder. Once they were cast, Thomas and Marama created this little clique, because a lot of their scenes are separate from the rest of the story for a large chunk of the season. They created their own little world, so it was fun to go shoot those scenes and see this different aspect of the show.

But the ones I loved, if I’m being honest, are Domi and Cliff (played by Jenny Stead and Black Sails‘ Craig Jackson). Because back when this was just a silly pitch for a little movie I was going to shoot with my friends in the desert, the original idea is that Domi and Cliff were the main characters, killing their way down Route 66. You’ll see a lot more of them in [this week’s episode].

TVLINE | Beyond Episode 2’s cannibals, what other freaks and phenomena will we encounter throughout the season?
We do our version of zombies, but they’re sex zombies — and I’m not going to tell you what that means until you see it. We do crazy Amazons, which is one of my favorite episodes. Episode 4 is set at an insane asylum. One is a weird, sci-fi, grindhouse Western. Episode 7 is actually a character piece, believe it or not! As much as our show can be a character piece, it totally is.

TVLINE | Is there a sequence you’re particularly proud of?
Episode 11 has a sequence where a character goes through a major trauma, and we had [the actor] do two completely different takes. In the editing room, David Straiton, our executive producer and director of four episodes, and the editor sat down and found a way to intercut the two takes into this really weird, artsy sequence. And while I am really proud of the whole finale, the last 15 minutes are in my opinion are just magic. It’s nice to go out on a strong note.

TVLINE | Is there a Season 2 plan?
When I pitched the show, before John Hlavin signed on [as an executive producer] and when I was a nobody to them, I pitched three seasons. I have a general idea for three more seasons, and then an offshoot of the brand — Midnight Grindhouse, with, like, crossover stuff. Totally, way ambitious pipe dream stuff. We have since fleshed out Season 2 quite a bit, and it’s even crazier, if you can believe that. Season 1 was just testing the waters!

Want more scoop on Blood Drive, or for any other show? Email InsideLine@tvline.com and your question may be answered via Matt’s Inside Line.