A moment more than a season in the making takes place in this week’s Power, and wow, it does not go the way I thought it would.

Ghost and Kanan finally come face to face for the first time since the former left the latter for dead in a burning building in the Season 2 finale. There are guns. There are threats. There are pleas for mercy, stacks of cash and collateral damage. And the whole thing ends with the death of a major character.

Here’s a hint: The goner is not Tommy… but it almost is. Confused? Let’s review the highlights of “New Man.”

STERN WARNING | After a nightmare/flashback to bashing Marshal Williams’ head in, Ghost wakes up at home — alone — and tries to shake off the memory as he heads to the shower. And because the series’ writers love us, he sheds his shorts as he does so.

In the kitchen, Ghost tells Tasha he wants to “put the past in the past.” She’s not inclined to agree; when he swears that he’s done with Angela, Tasha points out that the Assistant United States Attorney blew up her entire career just to make sure he went free, so maybe not?

Ghost isn’t at a newly reopened Truth for more than a few minutes before Simon waltzes in, ready to collect on the debt that Ghost has no idea Tasha agreed to. Of course, the slippery older man says, all financial obligations will be forgiven if Ghost agrees to partner with him on a real estate venture. Translation: Simon needs someone of color to be the public face of the business, in order to get some breaks and such. Later, Ghost is angry about Tasha’s deal, but she has no remorse. “Coming from the man who does whatever the f–k he wants without consulting anybody!” she counters, suggesting that Ghost turn around the situation and use Simon to his advantage, as well.

OH NO, JULIO! | Now let’s start the part of the recap that could be subtitled: “Two of Ghost’s Guys Get Into Deep Trouble But Only One Gets Out.” We’ll start with Tommy, who arrives in Chicago and meets Jason, the head of the Serbian operation. It all goes rather well — Jason wants Tommy to run the business on the West Coast, too, but “Ghost can’t be anywhere near it” — until Tommy mentions how unfortunate it was that he had to kill Milan.

This information is new to Jason, who order his goons to knock Tommy out and throw him in the trunk of a car. When Tommy wakes up, he’s at what is clearly an execution spot in the middle of nowhere. Petar is there, too: As it turns out, he gave Jason a very different story regarding Milan’s death — he claims a rival gang took out the cannibal — but Tommy loudly maintains his innocence. Still, it’s not looking so great for Mr. Egan… until Tatiana, Milan’s arm candy, shows up and confirms Tommy’s story. Jason shoots Petar in the head, the liar neatly falls into a pre-dug grave, and Jason goes back to being all jovial with Tommy. “I think you’ll be a great successor to Milan. I hope we’ll be in business for a long time,” Jason says while Tommy tries not to pee himself in relief.

Things don’t go as well for Julio, who falls for Dre’s pretense of help and winds up getting lured to a spot where his former crew, the Toros Locos, are ready to make good on the second half of their “blood in, blood out” policy. Because TL is dealing with Dre now, Ghost’s protection of Julio no longer means anything, and the moment Julio realizes he’s screwed is a rough one. He goes on the offensive, taking out two of the Toros Locos but sustaining a nasty ankle slicing in the process. Then it’s down to the leader, Uriel, and Julio. They battle, but Uriel winds up sitting on Julio’s chest and cutting the tattoo off his neck (so gross), then shoving his blade into J’s torso. Julio turns over and belly crawls a bit, making some terrible strangling sounds, but that’s it: He dies on the floor. 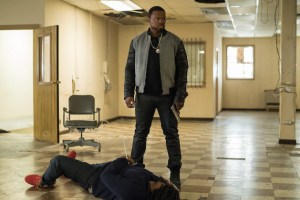 JUKEBOX’S LAST SONG | Kanan finally makes his move against Ghost, forcing St. Patrick into his car at gunpoint and telling him to hand over cash or Tariq will die. When Ghost protests that he just got out of jail and is a little short, Kanan is unimpressed. “Not having no money never stopped you from getting money before,” he reminds him. So Ghost decides to rob Tommy’s stash house — with Kanan as backup — and only on this show would an armed robbery in which someone dies (one of Tommy’s dudes, RIP) seem like a lighthearted romp/comic relief.

As they drive to where Jukebox is holding Tariq, Ghost and Kanan have a heart-to-heart, or as close to one as these two men are capable of. “I loved you like a brother. I wasn’t going to kill you,” Ghost says, explaining his choice to take Kanan out of the game by sending him to prison. “So you just made a bad choice,” Kanan replies, stone cold. Kanan then tells Ghost that Jukebox has his son, which worries him. IT SHOULD. Then Kanan hands Ghost a gun and gives him a choice: Kill Kanan now, or use the weapon to go in and they’ll get Tariq out together.

When the men get to the house, Jukebox quickly figures out she’s getting crossed, and she doesn’t like it. She pulls a gun on Tariq, who’s tied to a chair, and starts spilling secrets. “Tell him who you really are,” she commands Kanan, who does as she says, confessing that he’s a “no-good motherf–ker” who wanted to hurt Ghost, “so I used you.” Then, if poor Tariq isn’t traumatized enough, Kanan admits to killing Shawn.

Juke is done with the truth-telling, so she goes to shoot Tariq, but Kanan takes her out with a bunch of bullets to the chest. Ghost grabs his freaked-out son and hugs him, swaying back and forth. Kanan says he’ll see Tariq around, grabs the cash, and leaves.

OPEN HOUSE CLOSED | Oh, and on his drive back to New York, Tommy stops in Cleveland. He shows up early at an open house, but the stymied realtor lets him in and starts showing him around. Tommy’s comments as he tours the property are pretty funny — “What’s a den?” “Is this a safe neighborhood?” — but his real purpose soon reveals itself: The realtor is Holly’s uncle, whom Tommy knows sexually abused Holly when she lived with him as a young girl. The slimeball admits it’s true, saying “She wanted it, and I gave it to her” (even just typing that sentence makes me want to take a shower). So Tommy grabs a handy baseball bat and goes all Homerun Derby on the realtor’s head until they’re both covered in blood, and Holly’s uncle is dead.