The dumpster fire that is Angela’s legal career continues to blaze in this week’s Power, but at least this latest conflagration is for a noble-ish cause: Assistant U.S. Attorney Valdes’ honesty about her co-workers’ dishonesty gets Ghost’s case dropped.

But before you start feeling good about anything, Ghost kills a guy during the hour, too. Angie puts it best when she rebuffs James’ thanks for her part in securing his freedom, saying, “Maybe you didn’t do this crime, but we both know you’re not innocent.” 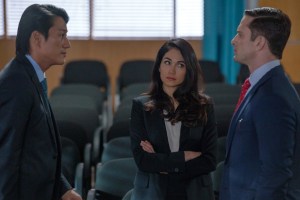 Here, briefly, is how James St. Patrick once more becomes a free man. The Feds zero in on a large check Tommy gave to Ghost. They think it’s payment for killing Lobos; remember, they’re still under the impression that Tommy calls all the shots. Meanwhile, Angela goes to Sandoval with what she noticed about the Truth security footage: Namely, Ghost never goes anywhere near where he allegedly stashed the gun used to kill Greg. When Mike tells her they’re going to ignore the tape because it’s “speculative at best,” Angela goes to Proctor for help, but he’s useless now that he’s been ordered off the case. So in the end, Valdes does what she thinks is best, testifying in court about the Truth tape and how her colleagues are pretending like it doesn’t exist.

That’s enough to get the case against Ghost thrown out, and as the episode ends, he’s preparing to re-enter life as a normal (ha!) citizen. But a bunch of other important stuff happens during the hour, too — such as:

* Marshal Williams is going to get transferred, and he’s not happy about it. Tony whispers to the guard that Ghost was behind the decision to move him, then implies that he can help him “get rid of” Inmate St. Patrick. So Williams corners Ghost in the prison’s weight room and starts talking smack about Tasha, but it doesn’t have the desired outcome: Ghost snaps and uses a weight plate to bash Williams’ head to a puddle of pulp. (Side note: I kept waiting for them to show us that it was just a violent fantasy of Ghost’s or something — that’s how vivid the gore was — but nope. Woah.) Tony and another prisoner come in, seemingly as part of a plan to aid Williams, but Tony quickly changes tack and kills his accomplice, then helps Ghost make the scene look like a murder-suicide. 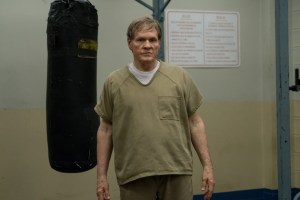 * As Ghost prepares to leave jail, Tony hands him a phone and orders him to have Tommy call. “What, you know his father or something?” St. Patrick asks… then realizes what we’ve suspected for a while: Tony probably is Tommy’s dad. The older man threatens to turn Ghost in for Williams’ death if he says anything.

* LaKeisha confides in Tasha that she “caught feelings’ for the white guy she’s sleeping with, and when Tasha surmises that it’s Tommy, she warns him tha the can’t break up with Keisha because she knows too much about Ghost’s business. Then she asks about Holly, and Tommy tearfully confesses that he killed her. T says she understands, which seems to relieve a little of his guilt. (P.S. It really shouldn’t.)

* Dre keeps the underground casino going as a way to offset losses from the clubs being shut down. He also has ideas about keeping the drug enterprise afloat. Tommy approves of both plans. What Tommy likely would not approve of, if he knew: Dre meets with Kanan, saying that he can help him climb back up to the top of the game. Kanan is definitely interested… but neither man knows that Julio witnesses the meeting from afar.

* Simon Stern reappears, offering Ghost and Tasha financial help while their accounts are frozen. Both turn him down, but after Ghost’s case is dropped, Tasha gives the wily older man a call.

* Silver is totally into Tasha, isn’t he? And am I mistaken, but is the feeling kind of mutual?

* Jukebox returns, does something (probably nefarious) to Tariq, then informs Kanan that Ghost’s freedom means their plan is back on: Ransom ‘Riq, then kill both the boy and his father. Surely the time that Kanan has spent with the teen in the past few weeks has changed his mind, right? “So what do you need me to do?” he asks, smiling. Welp, that’d be a no!

* Chicago summons Tommy for an in-person meeting, so he leaves, looking very unhappy about the whole thing.