Need to catch up? Check out the previous Power recap.

When he’s done coughing up blood and writhing in agony, Ghost may appreciate the irony at work in Power‘s Season 4 premiere.

After all, the drug kingpin murders with impunity, then gets thrown behind bars for the one killing he didn’t commit? It’s poetic. It’s a comeuppance. It’s… kind of an ish-show for pretty much all the characters we’ve come to know over the past three seasons.

And how, exactly, does James St. Patrick fare once he dons the jumpsuit? What about Tasha? Tommy? Angela? Find out as we recap “When I Get Out.”

LOCKED UP | Though Tasha’s frantically trying to contact her husband, trying to let him know about the ransom text she got regarding Tariq, Ghost uses his only phone call to talk to his lawyer, Joe Proctor. “Keep your mouth and sphincter shut,” Proctor advises, then loops Tasha in on everything that’s happened. When Proctor goes to the jail, Ghost maintains his innocence, but the lawyer points out that there’s some DNA evidence they’ll have to contend with. That’s when Ghost admits to being in the apartment in his ill-fated attempt to find Greg’s button recording.

“I need my kids to know I didn’t do this,” Ghost asserts, but Proctor says their more immediate concern is getting him out on bail. Until then, he advises, Ghost needs to act like the upstanding businessman he wants everyone to think he is. You’re James St. Patrick, he says, “and you wouldn’t know what to do with a gun if it fell in your lap.”

OH, YOU FANCY NOW? | Off a tip from Dre, Kanan lets Tariq go, playing off the whole thing as though the kid fell asleep and they “joked” with Tasha about the ransom. He gives the teen a burner phone and says he can’t say anything about who he’s really been hanging out with, so when Dre brings the boy home, Tariq lies and says he was with some friends. Tommy knows something’s up, and he suspects Dre is lying about how he found ‘Riq, but there are bigger problems at hand.

Meanwhile, Dre thinks he’s hot stuff, so he offers to cut Kanan in on Ghost’s business at the club, so now he’s secretly delivering $45,000 a week to Kanan, Jukebox and that crew. Because that’s going to end well.

BACK TO LIFE, BACK TO REALITY | Meanwhile, Tommy visits an undisclosed location and tells LaKeisha (!), who is very much alive, that Milan is no longer a problem and she can go home. She thanks him for keeping her safe, and he reminds her that Tasha can’t know that he hid her. Raise your hand if you kinda thought Tommy killed her…?

Later, during a meeting with everyone, Tommy brushes off concerns about Ghost’s legal woes and tells everyone that Milan is gone and he’s the new connect. Julio, by the way, is now distro (much to Dre’s dismay). Other than that, “It’s business as usual,” he reassures the crew.

TASHA IN TURMOIL | Tasha holds it together while the Feds — including a sad and unmoored Angela — search her apartment, even managing to come up with a couple of snarky barbs while facing down her husband’s former mistress. When Angela notes that Ghost was sleeping in the office, and not in Tasha’s bed, Mrs. St. Patrick shoots back, “”I was worried he might transfer bed bugs from your place.” (Ha.) 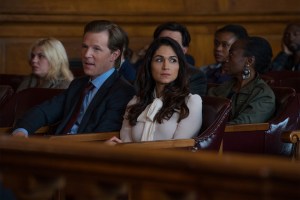 But Tasha’s real problems start when Proctor advises her to pull together $2 million in clean money so they can bail Ghost out of jail. “Bags of untraceable cash won’t cut it,” he says. “”How much do you know about us?” she replies, eyes narrowed. (Ha again!) But in her search, Tasha realizes that Ghost already sold all their stock and emptied anything of value from their safe-deposit box. At this moment, I’d say Ghost is probably lucky he’s nowhere near his spitting-mad bride.

But in the end, it doesn’t matter anyway: A sharp new Eastern District Assistant U.S. Attorny named John Mak takes over prosecution duties, and he convinces the judge to deny Ghost bail. “You can’t think I did this,” Ghost says to Angie on his way out of the courtroom. “You’re right, Jamie. I know you did it,” she replies, deadpan.

Once he’s back at the jail, two guards take Ghost to a secluded section and give him a welcome home gift: a swift, brutal beating with their billy clubs.

Now it’s your turn. What did you think of the episode? Grade the premiere via the poll below, then elaborate in the comments!