What happened in Power‘s packed Season 3 finale? The question should be: What didn’t?

Fire up the Notes app on your phone, because you’re going to want to keep track of everything that went down during the hour, titled “In My Best Interest.” Greg realized Mike Sandoval was the mole that helped Lobos — and when Mike figured out that he’d been made, he shot and killed Greg. Though Ghost had nothing to do with the murder, he had broken into Greg’s apartment earlier that evening… so his fingerprints were all over the place when Angela, on a hunch that her ex had been up to some very bad stuff, secretly dusted the place for evidence.

Meanwhile, Tommy and Ghost put a plan into motion to corner Milan. It worked, and they shot him dead (that Big Bad was quite brief, no?), but Tommy later revealed to Dre that he planned to continue selling the designer drugs in Ghost’s clubs — and that Ghost didn’t need to know about it. The night was going very well… until Angela, armed with the knowledge that the prints she found at Greg’s belonged to one James St. Patrick, arrested her former lover right on the dance floor of his very own nightclub.

To complicate matters, Jukebox arrived in New York and was working with Kanan. They drugged Tariq and sent a photo to Tasha, who freaked out when she realized that Kanan was holding her son hostage.

Read on as showrunner Courtney Kemp talks Ghost’s predicament, Angela’s decision and Greg’s death — as well as what Season 4 will look like when the series returns next year.

TVLINE | Ghost and Tommy: Was there any point this season where you were thinking, “Let’s completely blow this up. Let’s have them end this season as complete mortal enemies?”
Well, last year I wanted to give myself no rope. What I mean by that is, I wanted to do everything the show had promised from the beginning, and in that sense I wanted to kind of rid myself of the “What do I owe the audience?”

If you don’t [make Ghost and Tommy enemies], then you put the audience in a place where, “Oh, I don’t know what’s going to happen. This makes me uncomfortable because it’s the reverse of what it used to be.” It used to be Ghost was on top, very clearly, and Tommy was Number 2, and then we brought them to this place where Tommy can never really go back to who he was to Ghost. He can never do that. Ghost has done too many horrible things to him, and Ghost has also used Tommy to get rid of Milan, knowing that Tommy would drive them to that place and make it happen, knowing that he needed Tommy to be on board in order to do it and get away with it. Ghost has also used him, so in fact they’re using each other, and that’s why it becomes a symbiotic relationship and that’s how we can move forward.

I do think that it’s on some level, even though there’s obviously a love triangle of Ghost and Angela and Tasha, there’s also a romance in the show between Ghost and Tommy. It’s not a sexual romance, but it’s a platonic romance that really is about a brotherhood. So I don’t know that you can really separate them, because even when you separate them, their lives are still about each other.

TVLINE | That scene where Tommy warns Ghost that he’d better choose him, because Tommy had chosen Ghost over Holly? It was intimate.
It’s really interesting that Joe [Sikora] and Omari [Hardwick] have that connection, right? So, some of that is on screen. You see that. The two of them are very connected, so that’s when you get that relationship on screen, as well.

TVLINE | When we spoke when you were shooting this season, you mentioned that Season 3 was all about moving characters into position for Season 4. Now that you have the luxury of a two-season pickup, talk to me about what next season will look like.
One of the things I’d like to say is: It’s fearless television. One of the things that we could have done with the series is never have Ghost be arrested until the last scene of the series, right? That’s a version. We chose not to. We chose to be fearless and go right at it.

TVLINE | Mike Sandoval crossed a gigantic line in the episode. Is he still around next season? Or will he try to flee?
He’s definitely in next season, there’s no question. The issue is that he’s on the prosecution team for a crime that he committed, [Laughs] so we’ll see him behaving in ways to make sure that Ghost is convicted of the crime. Will he be successful? I don’t know. That’s important to say. 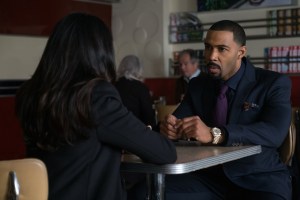 TVLINE | Lela Loren has said that Angela is really good at not seeing what she doesn’t want to see, yet we watch her nurse a suspicion and follow through on it during the finale. Was Greg’s death the tipping point for her?
It’s two reasons, one which is more charitable and one which is less charitable. The more charitable one is that Greg, for all of his craziness and intensity, is actually a good guy. But it snapped Angela back into her sense of right and wrong. Now, we wanted to keep her consistent, which is that she always breaks the rules in pursuit of a good end. She’s an end-justifies-the-means kind of person, which is why she and Jamie belong together. Right? It’s always the end justifies the means, no matter what.

[But] this is really wrong, you know… He’s an innocent as far as she’s concerned, and so it snaps her back into the Angela we met in the first season… She puts the white hat back on, but she breaks into Greg’s apartment and she finds the fingerprints. She does all that s–t because that’s her. That’s the charitable version.

Now it’s your turn. Grade the finale via the poll below, then hit the comments to elaborate upon your choice!