If you’d have told me a year-and-a-half ago that I’d be asking for more Maddie in my Nashville, I’d have told you to go shove your head in a Tupperware full of pink macaroni. And yet, as this week’s Gunnar-centric episode unspools, I find myself constantly wondering, “Yes, but what is going on with the Maddie-Juliette beef?” So here we are.

The hour spends a bunch of time with Gunnar in his old hometown, revisiting his childhood, which was even sadder than we’d been led to believe. Still, there’s only so much broody Gunnar a girl can take before she wants to move on. (Amirite, Scarlett? Too soon?) And I really, really want to know where the show is going to take the controversy brewing between Divas Barnes and Jaymes.

Alas, I don’t get my wish fulfilled during this week’s hour — though, with the American Music Awards on their way, there’s gotta be more bitchy goodness in the hopper, right? Read on for the highlights of “Speed Trap Town.”

OLD STOMPING-ON-YOUR-DREAMS GROUNDS | When Avery’s tour goes near Gunnar’s hometown of Aurora, Texas, he decides to visit his grandmother. The old woman is taciturn and rather ornery, insisting on smoking a cigarette in her nursing home room (while hooked up to oxygen!) because “I’m passing real soon.” Gunnar is a little unsettled by the interaction, and his kinda awkward conversation with Scarlett afterward doesn’t do much to make him feel better. But then he runs into Kelly, a girl he knew growing up, and she’s just flirty enough to get him to change his mind about leaving town that night.

So the pair wind up drinking near their old school, and from their talk, we understand that Kelly was popular and Gunnar was a loner who thought Kelly was “the prettiest girl in Aurora,” though he never acted on his feelings for her. When she avoids his question about what she’s doing these days, I write in my notes, “MARRIED.”

Gunny’s time in Aurora continues to trigger not-so-great memories of his life there, including his parents’ deaths and his cold, strict upbringing in his grandmother’s home. The flashbacks hit Gunnar hard, and by the time Kelly shows up to his room the next evening, he’s on the verge of tears. “It’s not like she hit me or anything,” he says sheepishly, but Kelly gets it: “Just because nobody hit you doesn’t mean you don’t have scars.” Then she kisses him, but he pulls away, and it’s just as well, because she’s (wait for it) married! “I’m not the answer to anybody’s problems,” she explains. “I’m just a girl with my own.

The next morning, Gunnar stops by his grandmother’s place to prove that he’s a good musician/a worthwhile human by playing her a song about burying fears and following your heart. Then he leaves town the same way he did everything while he was there: sadly.

HE’S NOT ME | Deacon likes a song Jessie wrote, but when he tries to help her get some studio time to lay it down, she keeps pushing him away. What’s really irking her: Her schmuck of an ex-husband is messing with her plans to go away for the weekend with their son, and then he shows up to needle her about how he’s the only one planning for the boy’s future. Jessie takes out her frustration on Deacon, who’s rather gracious when she realizes what she’s doing and apologizes.

Deacon adds that he’s fallen down so many times in his life, and he’s only gotten up again because kind people helped him out, and he got a little swept up in being on the other side of the equation for once. “That’s just really sweet,” Jessie says, and if she wasn’t smitten before, I’d say she’s in deep smit now.

NOMINEE DRAMA | Maddie gets nominated for an American Music Award in the “Favorite song pop/rock” category; her competition includes Katy Perry and Juliette. While Mads celebrates, Ju stews: She is bugged by the fact that things still aren’t OK between them. So she sends out a congratulatory tweet, and if you forgot your sunblock today, don’t worry: The amount of shade in Maddie’s reply should cover us all. “Thanks, @juliettebarnes. I wrote it myself,” she tweets. Meow!

Juliette sees the reply as a “screw you,” but Glenn suggests that maybe Maddie is protecting Juliette by not going public about the song-stealing. Still, at a press conference for the nominees, Maddie gives Ju the cold shoulder (while, coincidentally, wearing a cold shoulder top). Is it on? Because it feels like it’s ON. (And praise Reba for that!) 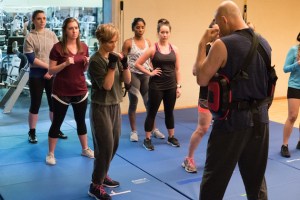 KICK ‘EM WHERE IT COUNTS | Still shaky following the robbery and her miscarriage, Scarlett moves in with Deacon and the girls for a little while until she feels safer on the whole. On Maddie’s suggestion, she also signs up for a self-defense class. The teacher sounds like he’s straight outta Ivan Drago’s corner in Rocky IV, and Scarlett doesn’t like it when he challenges her. But later she gets all empowered and whales on the instructor like she’s Rocky in Rocky IV, but because she’s Scarlett, she has to have a lot of feeeeeelings about it after. But she doesn’t wind up crying in a ball on the floor, so I’m putting this one in the win column.