The thing that many of us thought might happen to Scarlett and Gunnar after last week’s Nashville actually does happen in this week’s Nashville, and it’s heartbreaking. If you read these recaps with any regularity, you know that I’m far more likely to make a hemp-choker joke about Scarlett than to sympathize with her flights of emotional fancy. After all, how many public crying fits can a grown woman have before people stop taking her seriously? Yet when Deacon’s niece suffers a miscarriage in “You Can’t Lose Me,” you’d have to be a Jeff Fordham-level jackass not to feel some sadness on her behalf.

The breakup with Gunnar that follows? Eh, I’ve been more broken up about losing a sock at the laundromat.

Elsewhere, Maddie finds out that Juliette stole her song, and there are some Smash-level hysterics that follow. Read on for the episode’s highlights.

ADDING INJURY TO INSULT | The morning after their robbery, a bruised Gunnar goes to the police station to look at mugshots in the hopes that he’ll be able to identify their attacker. He’s unsuccessful. Scarlett rests at home, where she starts having pain and then sees that she’s bled through her pajama pants. (Side note: Is it just me, or does Scar look way more pregnant in this episode than she did in the last?) She calls Deacon, who arrives to find her frantically scrubbing the pants in the sink. When she nearly passes out, he picks her up and brings her to the hospital.

Scarlett Googles “bleeding during pregnancy” while they wait to see a doctor, and she’s just convinced herself that everything is going to be fine… when an ultrasound shows that the baby’s heart has stopped. Comprehension sinks in, Scarlett starts making high pitched sounds of grief and Deacon is barely holding it together. It’s rough.

Later, Gunnar storms into the hospital — he’s clearly already gotten the news — and is bereft as he stands by Scarlett’s bedside. The doctor says that the fall Scarlett took during the mugging didn’t cause her to miscarry, but that does nothing to help anything. Still, I’m glad the show made a point of saying it. Television dramas love using a minor knock or bump to explain away the end of a pregnancy. Nashville also chooses to point out another physically and emotionally painful aspect that TV often glosses over: Sometimes, women have to go through labor and delivery of the dead child before it’s finally over. And that’s what happens to Scarlett, who starts having contractions and kicks Gunnar out of her room, tearfully demanding that she’s going to do it on her own.

AN ODD, KIND GESTURE | Deacon calls Jessie to apologize for not calling an agent on her behalf like he’d promised her earlier, then winds up telling her about Scarlett. She’s very sympathetic — to the point that she puts together a miscarriage gift bag (I’m not kidding) for Scarlett and plans to leave it on her porch… but gets caught when Scar sees her. “Deacon told you?” Scarlett says, and I can’t fault her for the edge in her voice. But when Jessie says that she’s had two miscarriages and just wanted to help by providing a few things to ease the pain (special tea, iron tablets, a Ghostbusters DVD), Scar softens and invites her in.

The two women are sharing stories and crying a little (“I never even got to tell her her name,” Scarlett says quietly, adding that all she has of the baby is the blanket the nurses wrapped her in “because I asked to see her”) when Deke shows up. He thinks Jessie crossed a line by going to Scarlett’s place, and I don’t disagree, especially because he told her that no one was supposed to know about the baby. What, was Scarlett supposed find the bag of stuff at her front door and think the miscarriage fairy left it there? But when Jessie tells him about her experience with losing pregnancies, he is chagrined. 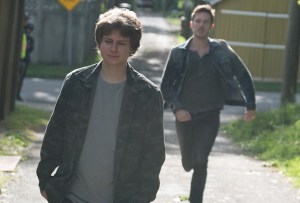 WE WEREN’T ON A BREAK? | At home, Gunnar drinks and broods and vents to Will that he should’ve done more to protect Scarlett during the attack. “I saw that movie, too. I don’t think it works that way in the real world,” Will says kindly, but Gunnar wants no sympathy. He stalks off to the bathroom, where he runs the shower but, sadly, does not strip and enter it. Inwardly, I worry — remember the last time Gunny eschewed personal grooming in favor of indulging his demons? It was when his criminal brother Jason was around, and it did not end well. In short: Bad things happen when Gunnar doesn’t wash his hair.

And yep, pretty soon a greasy, overtired Gunnar is prowling the streets in his car, creeping up on teenage boys, trying to find the one who pulled a gun on him. He eventually does, chasing the kid down and punching him, then getting freaked by his own violence. The kid runs off.

Gunnar is a mess when Scarlett shows up at his place later. There’s crying and self-flagellating, and they eventually come to the conclusion that they should take some time to think things through. Readers, I ask you: WHAT WERE THEY DOING BEFORE? Anyway, Avery calls to check in and invites his friend to join him on tour. Realizing that there’s nothing tethering him to Music City anymore, Gunnar accepts. 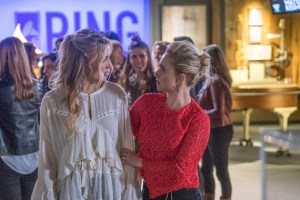 THE TRUTH WILL OUT | At Zach’s insistence, Juliette performs her new, highly successful single “Water Rising” as a duet at Maddie’s concert. But at a party the next evening, Ju nearly hurts herself trying to keep distance between Mads and Travis, the songwriter who thinks that the teen passed up his tune. It all erupts when Maddie and Travis run into each other in the lobby and he casually mentions how he’d like to work with her in the future, and how it’s totally cool that she didn’t want to record his song. Cue apoplectic adolescent in 3… 2…

Maddie runs back into the party and tosses a martini in Juliette’s face, right there in front of everyone. Oh, Eileen Rand would be so proud! Ju quickly tries to hush her and move the conversation elsewhere, but Maddie isn’t having it. “There’s nothing to talk about, liar!” she spits, taking off.

The next morning, a contrite Juliette shows up at the Jaymes-Claybourne residence, but has to make her case to Daphne, because Maddie won’t come to the door. Ju says there’s no excuse for her behavior, which is a little weaksauce IMO, but Daphne reports to her sister that “She seems like she really means it.” When Deacon asks questions, Mads replies that she wants to handle things on her own.

KEEP, KEEP, KEEP ME CLOSE | At the end of the hour, Scarlett plays that women’s clinic benefit she’d talked about with Alyssa last week, performing a sweet, lullaby-like ballad after announcing to the crowd that she’d miscarried. In the audience, Jessie tells Deacon she’s not going to sign with Highway 65 regardless of whether he wants her as an artist or not, because she wants to maintain some professional boundaries. I’m not really sure what she means by that, but whatever. She also meets Daphne and Maddie, and everyone instantly gets along.

Oh, and in a montage, we see Gunnar sadly drive out of town as Scarlett puts the baby blanket and booties in a decorative box bearing her daughter’s name: Amelia Rose.