Yet in this week’s Nashville, the couple’s insistence on hanging their emotional laundry in public nearly does them in, when pausing to fight in a grocery-store parking lot leads to their becoming victims of armed robbery and assault.

It’s a jarring incident in an episode otherwise filled with great, subtle character work, and it feels a little Season 2ish, especially in this new, less-soapy, Season 5 world. But you can judge for yourself as we recap the highlights of “The Night Before (Life Goes On).” 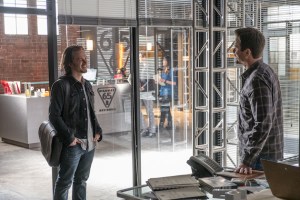 A COAT MAKES FOR COMPLICATIONS | We get an update on Liv: FosterMore, the charity that Rayna worked with before she died, is helping Daphne’s homeless friend by placing her somewhere that’s good for her. (We don’t actually see Liv in the episode, which makes me wonder if maybe that arc is wrapped for good?) We know all of this because Deacon is playing a benefit for FosterMore, and as the director gives him the update on Liv, she also reminds him that he promised to donate one of Rayna’s outfits to the event’s auction.

Maddie and Daphne are not OK with this… until they realize he’s planning to part with a blazer covered in sequined sunflowers, which is truly not cute. (What? No one ever said anything about speaking ill of the dead’s taste in show clothes.) Then he goes into Highway 65, where we get the episode’s far-and-away best scene.

Avery stops by before heading out on tour, and as Avery marvels about Cadence and how she’s growing, Deacon gets a little teary. He confesses he’s having a hard time with the auction, and how he’s symbolically giving away a piece of Rayna, but Avery gently reminds him that “it’s just stuff, right? The life that you shared, the music that you wrote together, that’s eternal. Nobody can take that away.” That makes Deacon cry a little more, then they hug and Deke smiles at Rayna’s photo as Avery makes his exit. Sounds cheesy, right? SO WHY AM I UNDONE? (Answer: The exchange is totally believable — I credit Jonathan Jackson and Charles Esten for that — and a really great moment for those two characters.)

ALONE TOGETHER | On the night of the benefit, Deacon and Jessie are seated at the same table — she’s performing, too — and I loved the nod to Deke’s dog, Sue, when he was talking to another attendee. Jessie’s ex, Brad, is there, too. He’s a total jerky douche, and Deacon sees the douchery and says nothing about the douchery

When the bidding on Rayna’s jacket starts, Deacon can’t handle everyone’s jovial nature. Meanwhile, I can’t handle that that sartorial eyesore is going for upwards of $40,000; I don’t care how good of a cause it’s supporting. He goes outside to be alone and Jessie soon follows — though he assumes she’s there to make him feel better, she’s actually there to kick a few garbage cans in her frustration over Brad and his bullying of their son.

“I would never presume to know your pain, because I’ve never had a love like that,” Jessie tells Deacon. “But I’m watching someone I love die in slow motion, and I would do anything for that boy.” Her pain pulls Deke out of his own for a minute; as he’s pulled back in to play his set, he bucks her up just a little: “I think you’re tough. I think you’re gonna prevail.”

After a quick conversation with his band, Deacon decides to switch plans. “This is for Rayna,” he announces before performing Waylon Jennings’ melancholy “Dreaming My Dreams With You.” It’s beautiful.

ABSENCE MAKES THE HEART… | On tour, a flirty hotel bartender named Nell goes after Avery — hard — but even when he’s drunk after a great set, our boy wants nothing more than to chat with Juliette. She’s had a hard day; post-accident Juliette doesn’t quite have the moves of pre-accident Juliette, a lesson her tour’s choreographer helps her learn after a fall during rehearsal.

Avery says he’s realized that he likes the new version of himself, “the one that has you and Cadence in his life,” better than the old version. But she lovingly forbids him to come home, because he needs to get his touring itch scratched so he won’t resent her. Probably true, given the way things were going a few episodes back, right?

MIDDLE SCHOOL DRAMA | Flynn asks Daphne to go to a friend’s party, but when they get there, it’s actually an intmate makeout-and-underage-drinking session for a few couples… and them. Neither Flynn nor Daphne drink or hook up, but they bond while chatting out on the swingset, and it’s sweet. Afterward, when she’s processing with Maddie, Daphne says she kinda wanted to kiss Flynn but also kinda didn’t. Her older sister assures her that she’ll know when it’s the right time. 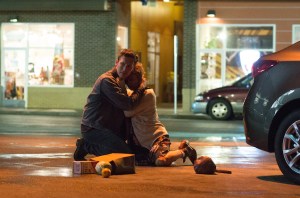 CRYING, SPILLED MILK | Alyssa has hooked The Exes up with a commercial for Birch Tree Habitat, an Ikea-like furniture company that is looking to update its image. The very annoying ad guy who pitches them the project notes that the store’s customer base is more than 50 percent millennials, “and they get that life is complicated.” Oh, dude, I already hate you. Neither Scarlett nor Gunnar seems super into the project, but Gunnar comes around a little and Scar grudgingly agrees to participate.

Still, on the day of the shoot, she’s grumbling and kvetching even before she learns that the table they’d agreed to assemble in the spot has been switched to a crib. But filming goes on according to plan… until Scarlett starts crying and halts everything, saying, “I can’t do this!” In case you’re keeping score at home, that’s three times (that I can remember, at least) in which Scar has agreed to something, then had a huge emotional breakdown in the middle of it. (Hiding under the piano on stage was the first, freaking out during the music video was the second.) “My baby’s not even born yet, and we’re already pimping her out for some Instagram followers,” she sobs to Gunnar, and I think I’m supposed to have sympathy for her here, but… nope. She agreed to do a job, for which she’s getting paid, and she’s an adult, so she should please just do it and stop wasting everyone’s time, cool?

On the way home, Scarlett and Gunnar stop for groceries and wind up fighting in the store’s parking lot. He claims to know why she was crying. “You don’t want to have this baby with me. You don’t want me, period,” Gunnar says, and she tells him that’s not the case, but they’re interrupted by some teens who want him to buy them booze. When he refuses, things escalate quickly, and pretty soon one kid has pulled a gun and is taking both Gunnar and Scarlett’s wallets. He also pushes Scarlett to the ground amid the milk she accidentally spilled, and he holds the muzzle to Gunnar’s forehead in a very menacing fashion. But in the end the youths just run off, leaving The Exes to cry and hold each other as the scene goes to black.